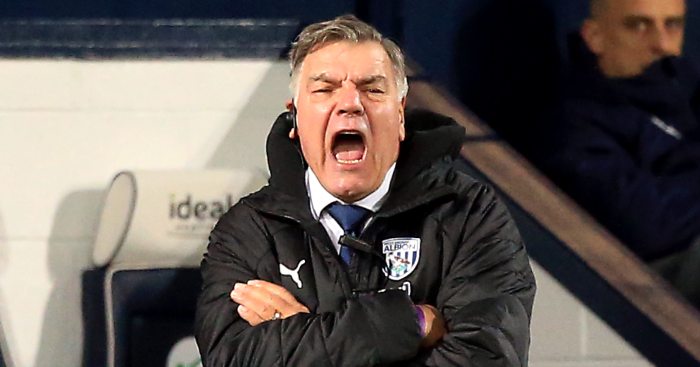 Sam Allardyce has stressed the starting point for his bid to get West Brom moving up the Premier League table is to work on their defence.

Following his appointment as their new boss four days earlier, Allardyce saw the Baggies slump to a 3-0 home loss to Aston Villa in the first match of his tenure last Sunday.

They were 1-0 down after five minutes via an Anwar El Ghazi goal, and after Albion skipper Jake Livermore was sent off in the 37th minute, an effort from Bertrand Traore and an El Ghazi penalty followed late on.

West Brom, second-bottom of the league with one win and seven points from 14 outings, have conceded 29 goals across those games.

Their goals for tally is 10, with just five being registered in the last 11 matches.

Ahead of Sunday’s trip to champions and current table-toppers Liverpool, Allardyce said: “You start by sorting the defence out, because if we get a clean sheet we only need one goal to win, and at this moment in time, the team is struggling to score more than one goal in a game.

“Goals have been difficult for us to come by, but clean sheets are more important to start with than goals.

“And if you can get more goals and clean sheets at the same time, we’ll start shooting up that league a little bit better and quicker than maybe anybody expected.”

West Brom drew 1-1 at Manchester City in their final match under Allardyce’s predecessor Slaven Bilic, and the 66-year-old former England boss said: “If they show the type of fighting spirit they did against Manchester City then they will have a chance of blocking out Liverpool and seeing what they can do with possession.”

Allardyce has also emphasised the importance of having an environment at the club where people have “a laugh and a joke” with each other.

Asked how the players had been with him since he arrived, Allardyce said: “I’m not sure how they’ve taken me yet.

“I’ve actually cracked a few jokes and got quite a sort of bemused look off one or two players as if (to say) ‘what’s the manager doing? Is he joking or is he serious?’ I have to assure them I’m having a bit of a laugh and a joke with them.

“A laugh and a joke, even though it has to get very serious on the way to Liverpool… We need to be interacting with each other, having a sense of humour, taking the mickey out of each other, (it) is all a part of the right bonding to get out of trouble.”

Allardyce admits social distancing guidelines at the training ground have had an impact on that sort of thing.

He said: “In terms of social distancing here in the training ground, only three round the table, that’s all spaced out… They all get together and have a prank, a laugh and a joke, a push here, a push there – that is sort of missing on a day-to-day basis I find, which is not healthy for anybody, but certainly in a football club.

“You like to see that little bit of laughing and joking.

“It’s happening, it does go on, but it does restrict it (with) what we’re faced with.”