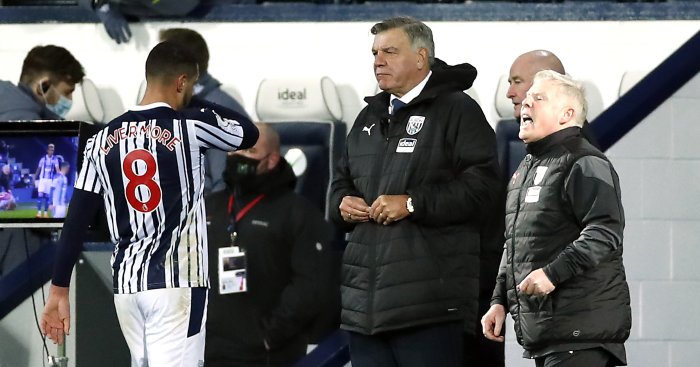 Livermore was shown a first-half red card, after a VAR review, for a lunge on Jack Grealish to compound Allardyce’s woes in his first game in charge.

READ MORE: Allardyce is king of false gods of survival

It was the Baggies’ third red of the season and he will miss the next three games, with Allardyce refusing to rule out a change of captaincy.

“It depends who wants to be captain after this and who can handle the armband. If I consider they are good enough they can keep it,” said the former England manager, with Albion second bottom in the Premier League.

“I won’t accept another sending-off, no matter what. We have to stop that otherwise we won’t have a chance of getting out of this trouble,” he added, presumably with Arsenal’s seven red cards since Mikel Arteta’s appointment in mind.

“It’s the first thing I asked the players do to, whatever you do don’t get sent off. I’m upset, I couldn’t be anything else but upset,” he continued.

“He has apologised to the players and to us. He looks very upset about it but from my point of view an experienced player like him should not have put himself in that position.

“We have to deal with it and it means we not only suffer today but also because we can’t pick him for three games. We need every player we have got who has Premier League experience. We haven’t got many of those.

“The 10 men battled bravely to try to stay in the game. They tried and tried against a Villa side who are playing very well this season.

“I’m really disappointed with the result but do give the 10 men credit for sticking to their task.”