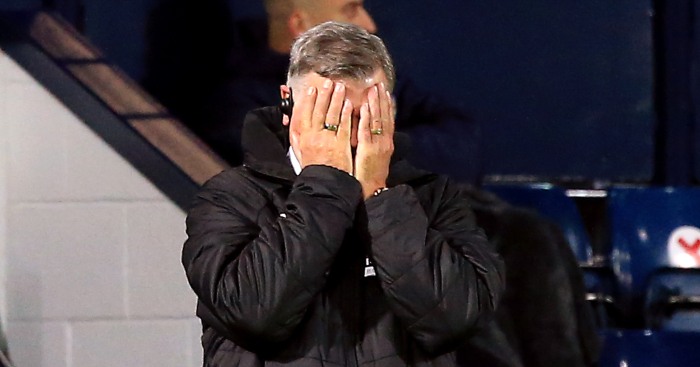 I wonder what it is like being Sam Allardyce as once again he is employed to be the large compacted stool that blocks the toilet of relegation and once again, fans of the club groan at his arrival and say they’d rather get relegated than have to witness the Dudley dude’s brand of defensive, attritional football and equally defensive self-regard.

While picking up a large amount of cash once again must ameliorate the situation for him, even so it must be galling to always be so poorly regarded by the people who, one way or another, are paying your wages. Not that he makes any attempt to be loved.

To be looked upon as little more than a grunting beast who will drink a pint of wine and generally resemble a wild boar with a wet adenoidal snuffle, rooting for truffles, cannot be good for your self-esteem. Clearly, he’s got a well-developed and well-fed chip on his shoulder and a deep sense that he is an unappreciated star in his own land. Whether you think he is or isn’t, it’s not hard to see how he has grown this psychological tumour after all these years of being disliked or at best disregarded. When it comes to fans holding their head in their hands and saying “oh no, not him, anyone but him”, he has no equal.

As he drags that big vibrating plate into the Hawthorns, possibly with Kev Nolan still balancing upon it, a picture of Kevin Davies’ buttocks on his desk, along with his Pentium 133 computer with ProZone 1.0 locked and loaded, a small, perhaps diminishing coterie in the press will once again aggrandise his basic managerial approach as though he is building a new hadron collider merely out of cheese and sheep droppings.

But if he once again keeps the club up, will he get any praise from the majority of fans? It doesn’t seem likely. And that’s because staying up at any price is no longer overly desired by fans. The very concept of Allardyce as the defensive knight in shining armour arriving to save the day is out-moded and old-fashioned. Okay the owners want to sell the club and will get more if it’s in the top flight, but that’s of little concern to supporters.

Now more than ever, relegation doesn’t seem that bad, especially with huge parachute payments (surely well overdue for reform). While it may be financially terrible for owners who have bet the farm on the delusion that staying in the supposed land of milk and honey is somehow all that matters, fans are increasingly less bothered. Many certainly hate just hanging on in the Premier League, trying to win seven or eight games and draw enough times to not get relegated.

The once-great prize upon which Allardyce could trade – staying up – has lost its shine for supporters. It is routine to see and hear fans of clubs in danger of going down say that they’d rather the team have a go and get relegated than have to pay to watch boring games. The fact that in recent years the Championship has become considered by many to be the pinnacle of football competition only makes the top-flight grip weaker.

This isn’t a fact yet well enough appreciated by those in the business of football and I include ex-player pundits in that. I listened last week to the always-entertaining Micah Richards on 5live saying surely it was always better to play games in the top flight and play all the top clubs, rather than playing a tier down at smaller clubs (insert ‘no disrespect’ caveat here). He didn’t phrase it quite like that, but that was the essence. He didn’t see how wide of the mark this view is now. Many of us do not buy into this hegemony in the slightest and indeed, totally reject it.

Just to illustrate, Middlesbrough played Birmingham City on Saturday and won 4-1. That is not worse in any way, or on any level, than any game they could have played in the Premier League and the idea it might be is actually quite offensive, dismissive and derogatory. It is snooty, elitist and just uneducated. Football, wherever it is played, can be massively entertaining, can provide tension, excitement and thrills. To put it down as though it is shopping in Poundstretcher for an imitation of the Premier League’s expensive designer handbag is insulting and out of touch.

There are many fans of clubs in the lower leagues that would like to be promoted into the Premier League for the money, but only for the money. They have little or no interest in being there per se and don’t find the idea of playing the big clubs such a privilege. They know being hammered most weeks gets boring. They know trying to hang onto 17th is boring. They know they can’t compete with the rich clubs. They want more out of their football life than grim attrition.

That’s why if Allardyce keeps Albion up, he will get little or no thanks. All he’ll have done is keep the club in a kind of jail. After all, the prize for staying up is merely to have the struggle all over again next season with him in charge. If that’s a prize, it is the wooden spoon.

It is only their belief in the Premier League’s exceptionalism that drives the likes of Micah to keep on pushing the notion that a club must do everything it can to both get into it and to try and stay in it. It’s just not that special. It’s only the First Division, it isn’t premier at all, it’s not some holy land where players walk on air and perform miracles. It is still just football: sometimes good, sometimes bad, sometimes very boring, occasionally fantastic, mostly just alright. Same as all football at all levels. Many fans know this, even if Allardyce and his employers don’t. If you see fans crying on the last day of the season now, it may well be because they haven’t gone down and will have to put up with being thrashed 7-0 by Liverpool et al again next year.

Pundits often unintentionally, perhaps subconsciously, put down clubs like WBA when criticising the sacking of a manager with the exasperated rhetorical question “what do they expect? What position did they think they’d be in?”. In other words, you’re only making up the numbers, shut up and know your place. That is precisely what is so dispiriting and exactly why, for fans of clubs that are struggling at the bottom, staying up hardly seems like a great prize. If you feel like you are mere fodder for the big clubs, it feels very much like this is not home. Being sold the idea that 17th is a glorious achievement is very hollow.

Surely the ideal situation in any division is to be a yo-yo club. Up one season, down the next, back up again the following etc etc. Norwich City fans must be the most entertained in the land on this basis. Two seasons at the top of the Championship, winning loads of games, then one in between getting hammered in the top flight.

If they’d finished 17th last season, would it have been more fun this year for their fans? Of course not. And there’s your proof, right there, of the lack of glitter the top flight holds for supporters. Norwich are the great argument for relegation being life-enhancing and are proof that clinging onto your Premier League status is merely worshipping a false god.

And that’s Allardyce: king of the false gods, a man they don’t want, charged with delivering something they’re not that bothered about, in a style they don’t like. Welcome back to the Premier League, Sam.