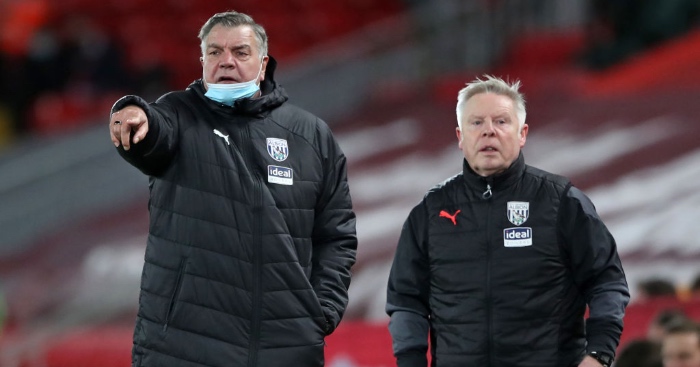 Sam Allardyce has voiced support for a “circuit break” in the Premier League as the number of positive coronavirus tests continued to rise.

After Manchester City’s match at Everton on Monday was postponed due to cases within the City camp, there were doubts over Sheffield United’s trip to Burnley on Tuesday, though the fixture ultimately went ahead with the Clarets winning 1-0.

A report in The Daily Telegraph said representatives of some top-flight clubs had proposed a two-week ‘cooling off’ period, and West Brom boss Allardyce insisted it was the “right thing” to cope with the outbreak.

“When I listen to the news the variant virus transmits quicker than the original virus, we can only do the right thing which is have a circuit break,” Allardyce said after his side’s 5-0 defeat to Leeds.

“I am 66 years old and the last thing I want to do it catch Covid. I’m very concerned for myself and football in general. If that’s what needs to be done we need to do it.”

The Premier League this week returned its highest number of positive tests this season. Between December 21 and 27, the League tested 1,479 players and club staff and 18 tested positive, eclipsing the previous highest number of cases – 16 in the week of November 9-15.

The PA news agency understands the Premier League is unaware of any talks over a break taking place. However, pressure is likely to grow after both Sheffield United and Fulham were affected by new outbreaks of the virus.

Blades boss Chris Wilder revealed ahead of their match at Burnley that the club had seen “a couple” of players and “half a dozen” staff test positive.

“It’s not an ideal situation but I don’t think we’re a club of one,” Wilder told SUTV. “It (the virus) is picking up and it’s running high at football clubs.

“We just notified the relevant authorities that we’ve had a situation at the football club. But I want to play football. That’s how it is, we’re not looking to get anything canned. We did the right thing as far as our responsibility to the Premier League and notified them regarding the players that are ill.”

The PA news agency understands Fulham have also recorded a number of positive tests and Wednesday’s London derby at Tottenham is dependent on the results of the players and staff at Craven Cottage who are yet to receive their results.

Manager Scott Parker has only just returned from self-isolation himself.

Manchester City began retesting their squad on Tuesday, hoping to have prevented a wider outbreak after Monday’s postponement, while Arsenal confirmed on Monday that Brazilian defender Gabriel had tested positive for the virus.

Southampton boss Ralph Hasenhuttl did not attend his side’s match with West Ham following a positive test in his household.

Nine games across the Sky Bet Championship, League One and League Two on Tuesday were postponed because of the virus, while Rotherham boss Paul Warne said his side are only playing their match with Barnsley to avoid a possible points deduction by the EFL.

Rochdale are one of the clubs in League One whose next two games have been postponed and their club doctor Wes Tensel called for the EFL to see the “bigger picture” and halt the current campaign.

Tensel, who is also a practising GP, told the PA news agency: “This is my opinion as a doctor. Some people will disagree, some won’t. This is just my opinion based on what I have seen working in the NHS and at a football club.”