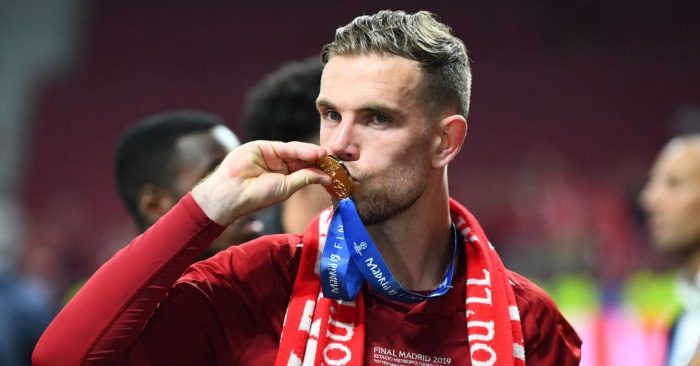 Liverpool were drawing at Southampton when Jurgen Klopp looked at Jordan Henderson and told him he was coming on.

Liverpool’s captain wasn’t always a first-choice pick by Klopp, who rotated his midfield more than any other position. Rarely had a three played together in successive games. By the end of the 2018-19 campaign Klopp had tried 29 combinations. There were two reasons for this. He expected each midfielder to defend and attack and this meant a supreme level of fitness. He had seen how the team suffered in Kiev when he did not have the options to make changes in the second half. After selling Philippe Coutinho five months earlier and replacing him with Alex Oxlade-Chamberlain, who was now injured, Klopp was low on numbers. He also recognised that Liverpool did not possess a number 10, a playmaker. By shuffling his selection regularly, opponents were unable to establish where the deeper central threat was really coming from.

In Sunderland, Kevin Ball was waiting to go on stage and do one of his after-dinner speeches as the tension began to rise on the south coast, 300 miles away. Henderson was placed in midfield. Though Trent Alexander-Arnold had supplied Naby Keita’s equaliser, he was withdrawn. Klopp decided James Milner’s experience was needed at right-back.

Ball recalled: “I was asking people at the do, “What’s the score?” I knew Liverpool were 1–0 down but when I found out they’d won 3–1 and Jordan had scored I was delighted.” He drove home listening to the radio. “There was a phone-in and one caller said something like, “What a turnaround . . . and even Jordan Henderson scored.” Now, that might have been the case but what gives people the right to come on and talk about a player who always gives his best for his team? He doesn’t go out there to have a bad game. He goes out and does his job and does it exceptionally well.”

Ball acknowledged he was emotionally connected to the midfielder, having been his coach for three seasons in Sunderland’s youth system. Ball had been a footballer too, playing more than 400 games at the club where Henderson made his debut. Ball was known as ‘Mr Sunderland’ even though he was born in Hastings and racked up more than a century of appearances for Portsmouth before moving north in 1990, the year Henderson was born. Ball was immediately accepted by Sunderland supporters as one of their own because of his wholehearted approach, as well as his obvious up-and-at-them leadership qualities, which led to him becoming club captain. He was a working-class man representing a working-class club based in Roker, the area of the city immediately south from Fulwell, where Henderson grew up and was spotted playing for Fulwell Juniors.

Though Ball was loved by the fans, he could relate to what it was like being underappreciated. Managers didn’t always take to him straight away and his ratings in the newspapers were not always that high. Henderson was viewed slightly differently but perhaps suffered from the same anxieties around acceptance. Brendan Rodgers was going to sell him before he made him his captain. Klopp was unsure at first, and Tottenham Hotspur wanted to sign him. Eventually, though, both coaches came to understand him, to love him. It turned out to be the fans Henderson struggled to win over the most.

Liverpool are European champions for a sixth time.

I have written a book about the club’s resurgence.

Though Ball was a dogged footballer he does not admire just the players who share the same characteristics as him. He cherishes individuality and creativity. He takes great pleasure from watching Henderson function in this Liverpool team. “The way they move the ball so quickly, it doesn’t allow the opponent to get close enough to stop them by making a tackle,” Ball said. “Liverpool have pace and match-winners all over the park. But even teams with so many match-winners need players who understand the other side of the game – those who can read what is happening and then set the tone with the quickness of their thinking and passing.”

This is where he believes Henderson fits in as a 28-year-old footballer. A decade earlier, he’d been the star of Sunderland’s youth system, where he was regarded as the creative hub of the teams he played for. He became a different player at senior level, where the game is more structured and managers have very specific expectations of players. As a teenager, according to Ball, Henderson was more spontaneous because he was able to do more of what he wanted. “A first-team manager wants a player who understands his tactical responsibilities and to follow instructions without any recourse,” Ball said. “Even though Jordan was a creative player in Sunderland’s youth system, he was always willing to sacrifice his own game for the good of the team. At Liverpool and with England, managers have always selected him because he does what they want. He has sacrificed a lot of his game for the good of those around him. I know what else he can do because I’ve seen it.” Ball recounted Henderson’s artistry in a game where he picked his way out of a problem by fooling two opponents in one turn: “I was gobsmacked, it was an unbelievable bit of skill. Initially I questioned whether he should have tried it but when players are gifted to that degree, you don’t coach them at that age – you guide them.”

Extract from ‘The Next Captain’ from Allez Allez Allez: The Inside Story of the Resurgence of Liverpool FC, Champions of Europe 2019, which is available here.