They're almost a very good side. They needed surgery and got a little tickle. 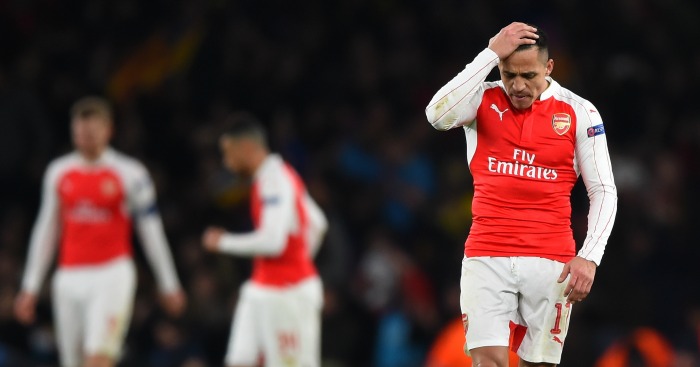 In the end, Thierry Henry was right: Arsenal had to score every time they got into Barcelona’s penalty area. Maybe not every time but at least once. After 30 minutes, the Gunners had had 11 touches in Barca’s box compared to just two from the best team in the world. One of those 11 touches was Alex Oxlade-Chamberlain’s pathetic prod towards the goalkeeper; by half-time it was still the game’s only shot on target.

“Frustrating for both sides – I’m not sure which manager will be happier,” said Gary Lineker at the break, and I cannot have been the only person who tutted at the standard, anodyne comment that seemed unbefitting of the occasion even if it matched the scoreline. And anyway, surely Arsene Wenger was the happier manager having restricted the best team in the world to one chance that Luis Suarez headed wide? Well, no.

Luis Enrique went into the break knowing that his side could not play so ponderously for another 45 minutes, that naturally attacking opposition could not play with two disciplined banks of four for 90 minutes, that only one team (Espanyol) had stopped them scoring since October, that he had the most dynamic attacking trio in world football, and that Arsenal had Mathieu Flamini on the bench.

Flamini is the man who has launched a thousand GIFs and many, many more swear words, but his intervention was pure comedy when the real tragedy had come before. It had come in that first half when Barcelona looked vulnerable, Suarez looked frustrated, Lionel Messi looked shackled, when Arsenal’s attackers had made a series of bad decisions, when an almost very good side had almost scored but not quite.

Scratch that, this match was lost in the summer when Wenger talked incessantly about cohesion and failed to buy a single outfield player. He may have been right to surmise that a significant goalkeeper upgrade was enough to challenge for the Premier League title, but surgery was needed elsewhere on the pitch to bridge even half the gap to Europe’s elite. Of course there was no Messi, Suarez or Neymar available, but there was always better than the almost world-class striker Olivier Giroud and the always stagnant Oxlade-Chamberlain amongst others. Alexis Sanchez’s frustration and recognition was all-too evident – he used to be that guy who needed to be upgraded.

Arsenal’s tactics on Tuesday night were perfect and executed to perfection for 70 minutes. Their natural 4-2-3-1 became a 4-4-1-1, they pressed high in patches, dropped deep for respite, broke at devastating pace. This was not parking the bus or playing for a 0-0 draw, it was maximising their chance of winning the game. As Leicester have shown this season, you do not need the ball to be effective. But what you do need is to be effective when you do have the ball.

“We didn’t deserve anything because we have enough chances to score at least one,” said Per Mertesacker after the 2-0 defeat, honestly heading off talk of Arsenal’s brave resilience. When he admits that “obviously you will never manage to keep them quiet for 90 minutes”, the inference is clear: Arsenal expected to concede. Forget outdated talk of Arsenal’s soft centre, that’s simply realism. For all the endless talk of ‘how do you stop MSN?’, their only real chance of an upset was to follow Henry’s advice and score every time they got into Barcelona’s penalty area.

Unfortunately for Arsenal fans, the truly world-class Henry is the one now doling out glib advice while Arsene’s band of likeable almosts are on the pitch being not quite good enough. Again. There’s no mystery here: They always hit a brick wall at the last-16 stage simply because they are not quarter-final footballers.