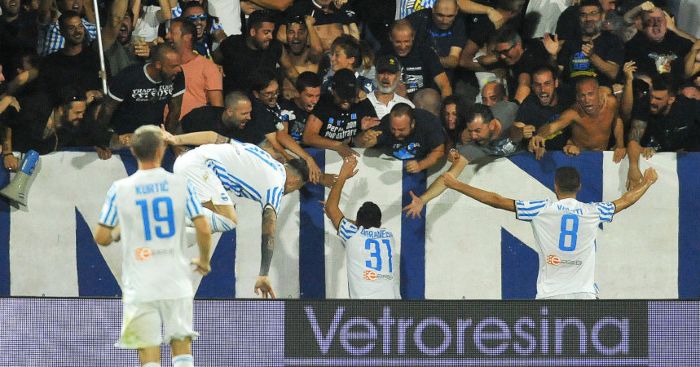 In July 2013, Italian club SPAL almost went out of business and into extinction. Six years later, they have earned three promotions and consolidated themselves in Serie A. They may be able to lay claim to the tag of European football’s greatest overachievers of recent years. In doing so, they have united a city and its football club…

History is neither cyclical nor linear, rather a blend of the two. What has happened is consigned to the past, never to be exactly repeated. Yet it shapes the future in ways that are intended, accidental and happily coincidental.

In July 2013, SPAL were heading for their third recent bankruptcy and faced likely extinction. Without the funds to register for their upcoming league campaign, the mayor of Ferrara threw his final Hail Mary pass and phoned a member of the Colombrini family. The Colombrinis had long been intertwined with industry in Ferrara, and held a stake in local club Giacomense, based in a small village of just 700 people. A plan was forged to merge the two clubs and keep football in Ferrara.

Giacomense’s president (and thus now SPAL president) was Walter Mattioli. Not only was Mattioli a lifelong SPAL fan, he was a former amateur footballer who had trials for SPAL during their glory days in the late-1960s. During his trial, Mattioli had been personally watched – andultimately rejected –  by SPAL president Paolo Mazza, after whom the club’s stadium is named. More than 40 years on, he would be following in Mazza’s footsteps.

The coincidences do not end there. In 1968, SPAL’s last Serie A campaign before Mattioli’s reign ended in relegation with a goal from Juventus midfielder Gianfranco Zigoni. SPAL’s two goals on their final day in Serie B in 2017 were scored by Gianmarco Zigoni, Gianfranco’s son. SPAL’s top scorer last season was Andrea Petagna. Andrea is the nephew of Francesco Petagna, SPAL’s manager during their glory years. He brought through Fabio Capello as a player.

SPAL can make a reasonable case to be labelled European football’s greatest overachievers of the last decade. In 2013/14 they competed in the old Lega Pro Second Division, the fourth tier of Italian football. Under the stewardship of the Colombrinis, Mattioli and manager Leonardo Semplici, they were promoted to Serie C, Serie B and Serie A in the space of four years and have somehow now consolidated in the top flight. Their first campaign in Serie B for 23 years in 2016/17 was expected to end in futile struggle. By May, SPAL were promoted as champions.

Last season SPAL finished 13th in Serie A, beating Atalanta, Lazio, Juventus and doing the double over Roma. They boast the only president and chairman to have taken an Italian club from the lowest league to the top flight, and the longest-serving manager in Italy’s top two tiers. In June, Semplici signed a new contract to ward off reported interest from Fiorentina and Sampdoria. The story is not winding down just yet.

This is the result of Mattioli’s vision: to rail against the short-termism and impatience of Italian football. To recruit and trust a manager who would put faith in youth. To reunite a city with its club. To lay the foundations for sustainable improvement and have faith that in doing so results would come. Nobody, even within SPAL, saw this coming. But they made it happen.

On the outskirts of Ferrara, where Roman walls give way to sun-cracked roads and minuscule bars whose grubby plastic chairs are scorched and half-melted in the summer sun, sits the Centro Sportivo SPAL. The training complex was built in the 1960s in the days of Capello et al, and hastily revamped to fit SPAL’s own status as a top-flight club. Back in the town centre, the club has invested €15m on a stadium that it doesn’t own just to satisfy the requirements of promotion.

Elsewhere, a new academy centre will be built within two years. It is described as a present to the next generation. Six years ago, there were 70 players in the club’s youth squads. Now they have 450 male players, 120 female players and official links with 80 different clubs in the region, giving SPAL access to 10,000 potential academy players. For the first time last season, three of the youth teams (Primavera, Under-17 and Under-15) reached the final stages of their respective competitions. Appreciate the present, but build for the future – that is the message.

“I had three objectives when I arrived,” Mattioli says. “Firstly we had to take care of the budgets and be realistic, because this club could never again return to the financial problems it experienced. Then we needed to reconnect the supporters with the club, and the club with the city. Finally, we needed to renew the club’s faith in homegrown players.”

Midfielder Manuel Lazzari is the perfect example of the club’s success. He joined Giacomense as an 18-year-old and thus joined SPAL the following summer after the merge. Lazzari’s debut in the third tier came in 2014, the second in 2016 and Serie A in 2017. In September 2018, he became the first SPAL player since 1952 to play for the Italian national team. Lazzari’s chapter alone is remarkable, but his one of many.

When telling stories like SPAL’s, it is easy to seek explanation in the mystical and ethereal. We talk of magic and inspiration. Phenomena this astonishing demand a sprinkling of poetic and artistic licence. But that does a disservice to the work done by Mattioli, Semplici and those who work beneath them. There is nothing groundbreaking or mysterious about their methods. Both committed themselves to sensible, logical plans at a club that had lacked such clarity. They helped SPAL to help itself, and placed no roadblocks or restrictions on their progress.

It is no surprise that supporters are eternally grateful. Mattioli explains the unfamiliarity of fans stopping him the street for autographs and photographs, but expresses his joy at the return of families to the stadium on matchday and recalls the emotion of watching supporters crying after the victory over Juventus last season. The Paolo Mazza only holds 16,000 people, but SPAL’s away followings are among the highest in Serie A. In March, the stadium was the only one in Europe’s top five ranked leagues (England, Germany, Spain, Italy and France) nominated for the Stadium of the Year award.

But this goes beyond SPAL and its supporters. The decline of primary industry in Ferrara and its region has forced the city to rely on tertiary industry and tourism for revenue. Situated within reach of Venice, Verona and Bologna, competition is fierce and times can be tough.

Football cannot hope to solve societal problems, but it can provide respite and succour. Every city deserves a football club in which it can be proud. Over a period of 30 years, Ferrera lost that. But when people have a passion that is eroded through underperformance, it never really goes away. It lies dormant, not extinct, ready to fire again when the circumstances are right.

“If you are serious, if you are sensible, people will come,” Mattioli says. “They will come again. That hadn’t happened for a long time. But by synchronising the club and the city, and establishing the right chemistry with the club’s structure, you can build something powerful. A city loves its club again. SPAL is a symbol of the city of Ferrara, and we had to keep it alive. I’m honoured that I was able to do it.”

Mattioli and his staff are proud of the present and recent past, but insistent that is the club’s future that makes them most excited. They know that staying in Serie A in the long term will be mighty difficult. SPAL still have the second lowest budget in the division and have signed two players in their history for more than €3m. This summer, they made Petagna’s move permanent for €10m as part of a clause in his loan deal, but Leicester City were reportedly interested in him and he will not stay forever. With their budgets, everyone has their price. That reality only makes securing a sustainable future more crucial.

In 1998, as part of a bid to improve the tourist attraction of the city, Ferrara applied to be classed as a UNESCO World Heritage site. In the application, it labelled Ferrara as ‘the City of Renaissance’. Their bid was successful.

Now the City of Renaissance has its renaissance football club. It has been dragged from the Middle Ages and into modernity. Never again, they say, will SPAL be defined by mismanagement and mistakes. This is the poster club for a brighter, enduring era.