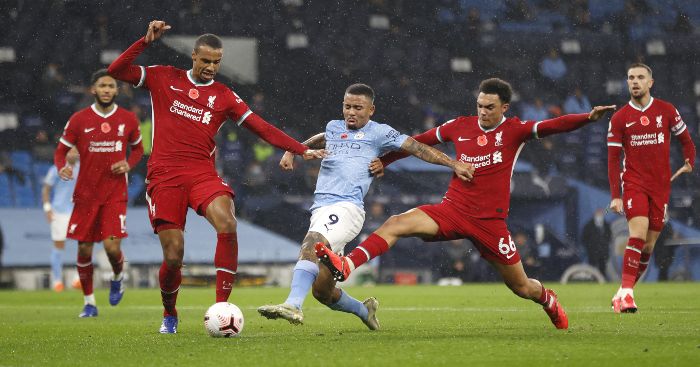 Liverpool are mid-table. But it will take you a while to guess who has led in the Premier League for the most minutes this season. Thanks to SoccerStats for the soccer stats.

Not since taking a lead through the disappointing Chris Wood in their opening game against Leicester have Burnley been ahead in the Premier League this season. Four clubs have been behind for longer but that will provide scant consolation for Sean Dyche. And possible content ideas for later this interminable international week.

The bottom two remain, albeit flipped around from the slightly more important actual league table. In a further quirk to the system arguably on par with Burnley’s only advantage thus far coming against the current leaders, Sheffield United have been a goal up just twice: against Liverpool (for 28 minutes) and Chelsea (for 14 minutes) before losing both matches.

Scott Parker has been in the ascendancy just twice himself but has crucially converted that supremacy into a draw and a win. Sheffield United pegged them back after a pre-Panenka Ademola Lookman goal last month; West Brom were utterly powerless to stop the freight train that is the 17th-placed Cottagers a couple of games later.

Never mind leaders, Manchester United just need more leads. There will presumably be mass celebrations when they finally reach this particular century. To be fair, the only time they have failed to turn an advantage into a win was against Tottenham, who were sufficiently angered by Bruno Fernandes scoring within a few seconds of kick-off. Brighton, Newcastle and Everton were all dispatched with varying degrees of competence. Everything is absolutely fine.

Slaven Bilic, winner in two of his last 19 Premier League games, is in a spot of bother. How different things might have been had West Brom managed to protect a three-goal deficit they had started to build in the fourth minute against Chelsea in September. The Baggies even trousered Everton for a while when they were good, before succumbing to Dominic Calvert-Lewin’s superiority.

Bilic does not deserve to be sacked after this. We've seen a change in attitude on the pitch that was needed and just a lapse in concentration from one or two players. Carry on like this and we could be ok.

There is no nominative determinism at play when it comes to Marcelo Bielsa’s side. Leads do not come all that naturally to Leeds. But Leeds have a 100 per cent conversion rate of their leads. Leeds saw leads against Fulham (78 minutes), Sheffield United (two minutes) and Aston Villa (35) lead to victories. They have actually won every league game they have led at any point since December 14, which is a statistic so ridiculous it is almost certainly wrong and a result of lackadaisical research.

Graham Potter was “frustrated” with Brighton squandering a one-goal advantage against West Brom last month, with 43 minutes separating Jake Livermore’s own goal and Karlan Grant’s equaliser. The Seagulls have actually won (v Newcastle), drawn (v West Brom) and lost (Manchester United) in the three games they have led this season, although two of last campaign’s three relegated clubs were ahead for more minutes than Brighton and they still stayed up relatively comfortably. Room for improvement nonetheless.

Perhaps more instructive is the fact only West Brom (384 minutes) and Sheffield United (381 minutes) have been level for longer than Arsenal (362) as Mikel Arteta favours stability and security above all else. When it works it looks like tactical genius. When it doesn’t it can go spectacularly wrong, as Aston Villa were all too happy to prove. Such fine margins mean they have only led for half an hour or longer in one game: the opening-day victory over Fulham.

One place higher than in the real table. How very Steve Bruce. Silly fans for wanting to win the actual Champions League/craving something a little more meaningful.

Fulham are a slight outlier in the list of teams West Ham have been ahead against in the Premier League this season: Wolves (73 minutes), Leicester (76 minutes), Manchester City (33 minutes) and Liverpool (32 minutes). David Moyes deserves some genuine credit for his quietly impressive work.

Congratulations to David Moyes on being nominated for Manager Of The Month for October.

“The problem was that after we scored we were not able to defend well, and they took advantage. They were able to score easily,” said Carlo Ancelotti after the loss to Manchester United, in which Bernard’s early opener was soon cancelled out. That was the first time they had led a Premier League game since their first four, which were all turned into victories.

Liverpool have been in the lead for more of their four Champions League and League Cup games (245 minutes) than their eight Premier League matches. Yet they have simultaneously been ahead in each of their league fixtures aside from the Aston Villa debacle. Either way, it seems to be working.

They have been in the lead for as many as 86 minutes (against Fulham and Liverpool) and as little as stoppage time (against Leicester). But one thing is for certain: Aston Villa have had a five-goal advantage in a game for longer than anyone this season (15 minutes).

That overrated sod Kevin de Bruyne stopped them going ahead against Liverpool at the weekend, with West Ham the only other club to keep Manchester City from edging in front at any point this campaign. What a shame they incur a five-goal deduction every time Pep Guardiola wears that woolly number in the autumnal Manchester rain.

Brendan Rodgers likes protecting a lead almost as much as he loves the smell of mince cooking while he’s out on a run. The former is made much easier by the ability to sit back and launch the ball at Jamie Vardy. It is unclear what effect that has on the latter.

And that is with letting a couple of leads go against Southampton. Chelsea do seem to be finally making some significant and sustainable progress under Frank Lampard, but the real test will be after the international break. Forget that run of games against Tottenham, Leeds, Everton, Wolves, West Ham, Arsenal, Aston Villa, Manchester City and Leicester in between Champions League duties; their first game back is at Newcastle.

“We felt the pain against West Ham and since then strategically the team is behaving in a different way,” Jose Mourinho said recently, the Portuguese adding that his players finally realise scoring the opening goal means it is “time to be compact and fight for that victory”. They have done so thrice in the Premier League since that disastrous draw.

In their last three league games alone Southampton have led for a combined 216 minutes against Everton, Aston Villa and Newcastle – longer than every team from the Toffees up on this list. If anyone is going to do a Leicester then few are better equipped than Ralph Hasenhuttl’s marching Saints.

Yet everyone pales in comparison to Crystal Palace. They have scored the opening goal five times: in the 7th, 8th, 12th, 13th and 19th minutes. Only once have they wasted that lead, with Brighton’s equaliser last month coming in second-half stoppage-time. Considering they were ahead for a total of 522 minutes in all of 2019/20, it really is quite astonishing.