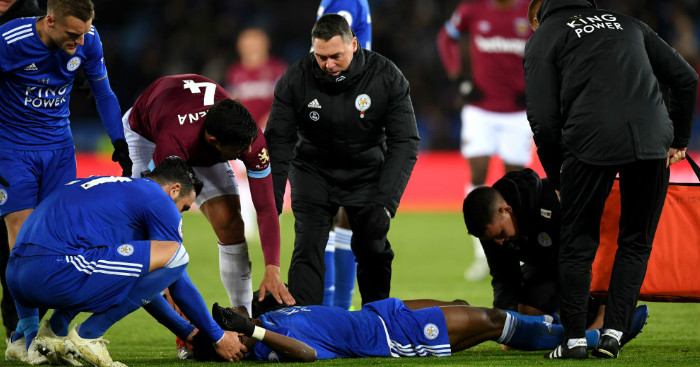 Leicester boss Claude Puel confirmed that Daniel Amartey was taken to hospital after suffering a suspected broken leg during the draw with West Ham on Saturday night.

Amartey had to be carried from the pitch on a stretcher during the closing stages of the Premier League game at the King Power Stadium.

After receiving oxygen from medics, the 23-year-old midfielder, who played as a right-back against the Hammers, left the field with his left leg in a brace after appearing to get his studs caught in the turf.

Puel said the club are awaiting news about the extent of the injury, he said in his post-match press conference: “My first thoughts are for Daniel, I hope it is not a serious injury, of course.

“He will have an exam and we will see after. He has gone to the hospital, of course.

“He had a strong game and battled for the team. He won his battles and then sacrificed himself to save an opportunity.”

Photographs online appear to suggest Amartey has suffered a break and fears are he will probably not play again this season. However, Puel would not be drawn on that, saying: “I can’t have an opinion. We will wait for news.”

The low of Amartey’s injury came shortly after the high of Wilfred Ndidi scoring a last-minute equaliser for Leicester – who had been behind since Fabian Balbuena’s strike after half an hour. to spare Leicester a third straight Premier League defeat.

Daniel Amartey
Your browser is out-of-date!