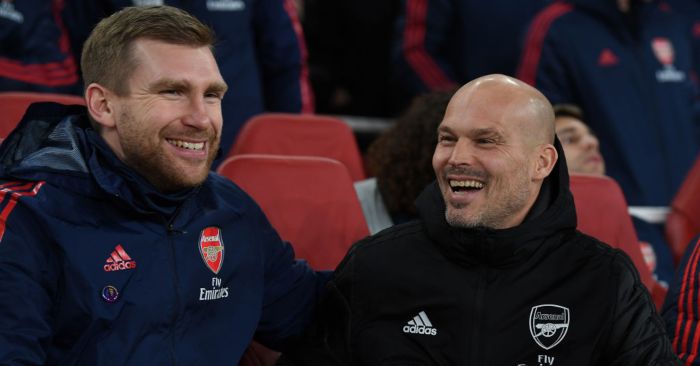 “We gave him permission to go,” said Arsene Wenger, “but with a promise that he will come back if there’s a possibility to come back here. Overall, I think it is part of his education to become a coach, to have this kind of experience.

“Hopefully we can use that later at Arsenal.”

As the club continues to struggle and strive for an identity 18 months after his departure, Wenger’s idealistic hope has morphed into despair; a “promise” has become a problem.

This was not exactly how he foresaw Freddie Ljungberg’s grand return. Nor was it ever “this kind of experience” the Swede required, a “part of his education” that he was lacking. No student is taught how to fail. They are encouraged, nurtured, provided with a support network and solid foundations.

A nascent coach is no different. Yet Ljungberg’s backroom staff for five games has comprised entirely of in-house solutions: Per Mertesacker, combining his role as Academy coach with first-team assistant duties; Under-23 strength and conditioning coach Sam Wilson; and goalkeeping coach Sal Bibbo. It is laughable, baffling and indicative of a football circus, not a business.

Pep Guardiola – flanked by Brian Kidd, Rodolfo Borrell, Xabier Mancisidor, Lorenzo Buenaventura and Carles Planchart – must have wondered what was greeting him at the Emirates Stadium. Mikel Arteta, the man Arsenal so covet, surely reconsidered his next move.

Even before Ljungberg’s first match, the 2-2 draw against Norwich, the Daily Telegraph spoke of how his ‘appreciation of the culture of the club, his familiarity with the staff and the way in which Arsenal like to view themselves as an institution’ weighed in his favour.

That respect, that acclaim, has not been reciprocated. They have offered neither backing nor clarification to an inexperienced 42-year-old. He has been set up to fail. They have simply put him at the wheel, asked him to drive to an unknown destination in an indeterminate time-frame and watched the subsequent car crash unfold.

Sunday was the culmination of a pathetic process that should have started long before Unai Emery’s sacking on November 29. Tottenham parted with Mauricio Pochettino at 7:34pm on November 19 and appointed a new manager at 6:29am on November 20. They did not stumble upon Jose Mourinho’s name and number in the ten hours and 55 minutes in between.

A replacement should have been identified and secured, a solution confirmed when Arsenal were dismissing fan disgruntlement as “noise”. More than a month has passed since that point, at which Emery’s position seemed untenable to all but those in charge, and their own silence is now deafening.

Arsenal had one of two choices: put absolute faith in Ljungberg and appoint him a proper backroom staff when it became apparent he would be in charge for longer than one game; or make a permanent appointment quickly and decisively. This arrogant purgatory could cost them their season.

It should not be forgotten that this was an entirely predictable scenario. Emery was struggling under the weight of expectation and pressure at the end of last season. Ljungberg’s stock was rising and a job swap with Steve Bould was just reward. ‘Give it until December before Emery is ousted and Ljungberg is promoted once more,’ noted one sage foolish enough to expect the honeymoon to last until March.

One could never have foreseen Arsenal going on holiday and leaving their adolescent son unsupervised, fending for himself. Ljungberg, as a direct result of such ignorance, has thus had his burgeoning reputation tainted – albeit not damaged beyond repair – for no good reason.

Arsenal have been caught trying to make lightning strike twice in different parts of the country. They saw Ljungberg, a popular former player and promising young coach, and figured he would simply mimic Ole Gunnar Solskjaer’s initial impact at Manchester United. But he was bestowed Mike Phelan, Michael Carrick and Kieran McKenna from his first day as interim manager. Duncan Ferguson was treated with similar transparency by Everton, who surrounded him with youth and years in John Ebbrell, Francis Jeffers and Alan Kelly immediately. Both had people to bounce ideas off, to confide in, to discuss with, to be advised by. Both engendered short-term improvement. Ljungberg has nothing resembling that and – while not entirely blameless – has thus struggled.

So if Arsenal can handle such a player – an Invincible – with apparent contempt and indifference through their lack of foresight and planning, Arteta would be naive to take the post mid-season, perhaps even at all. And considering ‘some snags with the formation of his backroom staff’ counted against his candidacy in summer 2018, he must heed the warning of that same issue still being present 18 months later. He has as many contacts now as he did then, and Manchester City won’t let their departing co-assistant raid the cupboards freely.

Wenger had the best intentions when he expressed a desire for Ljungberg to return almost as soon as he left. But the wish that “hopefully we can use that later at Arsenal” has been realised much too literally by a hierarchy that has taken advantage of him. Arteta, watching from the outside but given the perfect view at the weekend, cannot complain or act surprised if and when the terrible boyfriend starts mistreating him in public too.