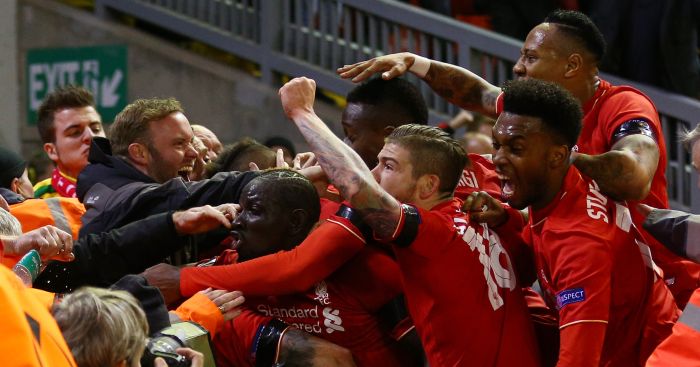 Add Dejan Lovren against Borussia Dortmund to the illustrious list. A famous European night at Anfield was promised; it was comprehensively delivered in every possible way. Liverpool are in the semi-finals of the Europa League after a truly remarkable match.

Visiting manager Thomas Tuchel promised an attacking performance from his side. After being held at arm’s length by Liverpool in the first leg, Dortmund had a point to prove. So too did the hosts. What followed was the most pulsating 90 minutes of football witnessed in recent times.

The pre-match preamble often serves as an obstacle to the match, a bland starter before the all-important main course. Somewhere between the ongoing rendition of ‘You’ll Never Walk Alone’, reverberating around the stadium courtesy of both fans, and the minute’s silence to commemorate the 27th anniversary of the Hillsborough disaster, the build-up had threatened to overshadow the game before a ball had been kicked. Proceedings in the first leg were pedestrian at best, one side seeking to simply cancel out the other. Would Liverpool look to provide the immovable object to an irresistible attacking force again?

Not a chance. Dortmund not only tore up the script, they moved the set, recast the main characters and drafted in a new director in the opening ten minutes. First Henrikh Mkhitaryan, then Pierre-Emerick Aubameyang, decimated Liverpool’s away-goal advantage. The Kop was silenced. The Reds had been engulfed in a whirlwind of pace, power and precision.

At half-time, this threatened to be a showcase of Liverpool in excelsis: Promising build-up followed by crushing disappointment. Chances fell for Divock Origi, Phillipe Coutinho and Roberto Firmino. Only on a freshers’ week in Leeds will you see a poorer shot-conversion rate than the Reds’ in the first half. As they did against St Etienne, against Olympiakos and against AC Milan, Liverpool required three goals for a remarkable comeback. Only this time, the miracle was not forthcoming.

Even when the excellent Origi scored to make it 2-1, Marco Reus was on hand to quell the danger fewer than ten minutes later. Dortmund led 3-1, and they were headed into the final four.

Coutinho restored the belief. Mamadou Sakho compensated for crucial mistakes in all three Dortmund goals with the equaliser on the night. Defensive partner Lovren atoned for his own sins with the winner. Anfield was sent into delirium.

“We decide when it is over,” said manager Jurgen Klopp back in November. Liverpool had just lost to Crystal Palace after a late Scott Dann header, which saw fans leave the stadium despite more than ten minutes of the game remaining. “I felt pretty alone at this moment,” the German added. How far the Reds have come in those five months. How far they still must go to achieve their objectives.

Since that Palace defeat, Liverpool’s renewed resolve has been abundantly clear. In January, a last-minute equaliser against Arsenal was followed by an even more dramatic 5-4 victory over Norwich. February saw a late leveller in the Capital One Cup final against Manchester City. In March came a 2-1 win over Crystal Palace, again secured in the final moments. In recent years, the Reds would crumble in the face of adversity, folding, not fighting, in the face of resistance.

Not this Liverpool side. Klopp has instilled a battling mentality at Anfield, and not only in his players. Judging by the atmosphere, the fans have been inspired by the German. The manager has helped unify a broken club. For once, this can actually be called a ‘famous European night at Anfield’.