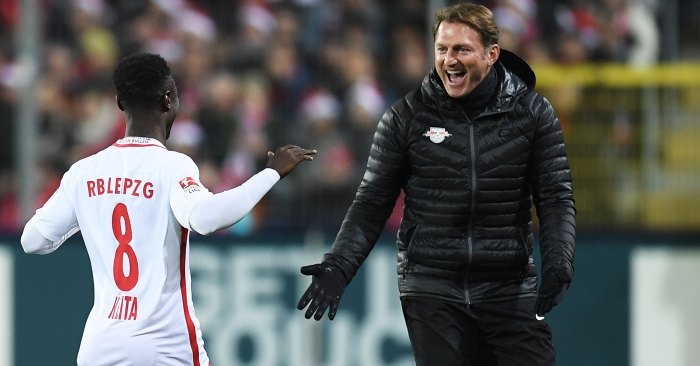 Ralph Hasenhuttl looks likely to replace Mark Hughes as Southampton manager, with the former RB Leipzig coach set to be appointed ahead of the Cardiff clash this weekend.

Hasenhuttl is a 51-year-old Austrian coach, born in Graz. Here are a few other things you may or may not have known about the prospective Saint…

International career
Hasenhuttl made his Austria debut aged 20 in 1988. Over the next six years, he gathered a total of eight caps – three as a starter – while scoring three goals.

Unterhaching – Oct 4, 2007 to Feb 22, 2010.
Games managed: 88 Points per game: 1.59
After progressing from roles as youth coach and assistant first-team coach, Hasenhuttl was appointed head coach in 2007. Unterhaching finished sixth before missing out on a play-off place in the newly-formed Liga 3 by a single point in his first full season in charge. They failed to build upon that success, however, and Hasenhuttl was fired 24 games into the following campaign with the team in 15th place.

Aalen – Jan 2, 2011 to Jun 8, 2013.
Games managed: 93 Points per game: 1.46
Hasenhuttl took over Aalen with the team one place above the relegation zone in Liga 3. He kept them up before rebuilding the team in time for 2011-12 with the aim of a mid-table finish but Aalen ended the season as runners-up, winning promotion to Bundesliga 2. The following season, they finished ninth and were as high as fifth. Hasenhuttl resigned the following summer after disagreements over the direction of the club.

Ingolstadt – Oct 7, 2013 to Jun 30, 2016.
Games managed: 95 Points per game: 1.48
Later in 2013, Hasenhuttl took over Ingolstadt, guiding them from the bottom of Bundesliga 2 to a 10th-placed finish. In his first full season in 2014/15, Hasenhuttl led Ingolstadt to the title, earning promotion to the Bundesliga for the first time. In their maiden season in the top flight, Ingolstadt finished 11th before Hasenhuttl opted against renewing his contract.

RB Leipzig – Jul 1, 2016 to May 16, 2018.
Games managed: 83 Points per game: 1.69
Hasenhuttl agreed to manage newly promoted Leipzig ahead of their first season in the Bundesliga. With new signings including Timo Werner, Naby Keita and Oliver Burke, they got off to a flying start, not losing their first game until December, at Hasenhuttl’s former side Ingolstadt. After that defeat, they spent the remainder of the season in second place behind Bayern Munich while securing a Champions League place.

They struggled to build upon that success, finishing sixth in Hasenhuttl’s second season in charge, while reaching the Europa League quarter-finals after exiting the Champions League at the group stage. Hasenhuttl wanted to extend his contract but Leipzig were content with the one year remaining on his deal. So the coach asked to end the agreement early. The club reluctantly agreed.

RB Leipzig have granted Ralph #Hasenhüttl's wish to terminate his contract with #DieRotenBullen prematurely. The club had hoped to continue working with our head coach until his current contract ended in summer 2019. pic.twitter.com/uD3UKdJMYd

Hasenhuttl has experience working at both ends of the table and has demonstrated an adaptability to meet the circumstances. His most notable success in guiding newly promoted RB Leipzig to a second-place finish in the Bundesliga was built upon an attacking approach which drew comparisons with Jurgen Klopp’s methods at Borussia Dortmund and Liverpool. Indeed, the Austrian earned the nickname ‘Alpen Kloppen’ – Klopp from the Alps.

The former centre-forward employs a variety of systems but one common theme is the use of dynamic, attacking wing-backs or full-backs. However, as Hasenhuttl said in an insightful interview with Football Paradise earlier this year when looking back at his Leipzig reign: “Every opposition needs to be played in a different way and the formation depends on the opposition’s strengths. But we trained [mostly] with 4-2-2-2, 4-4-3 and 3-4-3 because we could adapt that for most games.”

120 – Ralph Hasenhüttl won 120 points in the Bundesliga during his two-season spell as manager of RB Leipzig; only Bayern Munich (166) won more in this period. Saint. pic.twitter.com/KEsr8YgDZL

“Klopp and I did our coaching badges together and we know each other very well. I think we appreciate a similar philosophy on football – we want to play a high tempo game, we want our guys to sprint around, press well and these are elements which make the game livelier and varied and get people excited.

“I think no matter where I’ve worked, in Aalen or Ingolstadt or here, the stadiums have always been full as a result of how we played. It’s successful, attractive and represents a particular way of life and that’s down to our philosophy. There’s a saying: ‘either you give the people what they want to see or one of you looks for a new stadium’. I agree with that 100 percent.”

– Hasenhuttl to bundesliga.com on similarities with  Jurgen Klopp

“I have an interesting way of playing football, I believe, and I’m a good motivator, but my biggest strength is that I’m open-minded and empathetic. I’m always trying to find a good and close relationship with everyone in the club, players, trainers, staff. That’s important to me, the human side.”

– Hasenhuttl on his methods

“The fact is that today I spoke with no other club, except that I once had a loose contact with Bayern Munich. I said that I cannot imagine that I am a solution for Bayern, because I lack the international experience.”

– Hasenhuttl admitting he wasn’t ready for the Bayern Munich position when approached earlier this year.

“There are a few German trainers in the Premier League and some players I’ve coached before. Pascal Gross from Brighton was telling me about how they play there, how they work there and he thinks I would enjoy it there, be a good fit. Of course, to be a trainer in the top six, you have to show championships or cup you have won. Klopp was bigger than I am now.”

– Hasenhuttl on working in the Premier League.

“Ralph could coach every team in the world. The question is if he wants to do it. Right now, there’s no reason to leave the train here at Leipzig. That Ralph, just like our players, has been linked to other clubs is only a logical consequence of our development. He could do Bayern, but I don’t think he’ll go there in the next two years.”

– Ralf Rangnick on Hasenhuttl in October 2017

“Ralph has everything. He is collecting continental experience with Leipzig already, he and his team are in the top spots of Bundesliga, he integrated really well into the club and is making the next step. But give him time to improve and gather experience, so that we don’t put pressure on this great personality for something that might come too early.

“His basic talent is extraordinary, and that is what makes him a perfect for Bayern, some time. I think that for Ralph, Leipzig will still be a great fit for many years to come. They have a clear idea and philosophy that work together with his thoughts. Plus, the experience that he gathers every year and in every single European game. That’s what makes him – and Leipzig might be angry about this – but that makes him a perfect fit to become Bayern coach or a coach of another great team. He’s got the potential, but he will need some time.”