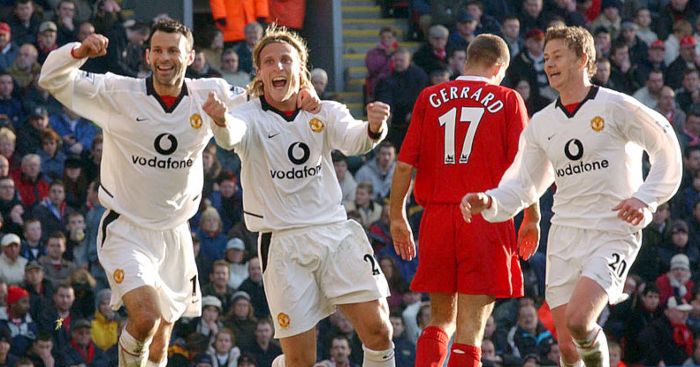 Who’s this week’s hero, Johnny?
This week’s hero had a 21-year playing career that took him all over the world from Uruguay to Argentina, Brazil, Japan, India and Hong Kong, via Spain, England and Italy. He played 112 times for his country, scoring 36 goals, winning a World Cup Golden Boot in 2010.

With a career goals tally of 274 in 698 games, for a while he was one of the most feared strikers in Europe, capable of scoring all different sorts of goals with huge aplomb. Long-range bullets, free-kick curlers, lashed penalties, tap-ins, headers and twisting volleys were all colours he could paint brilliant pictures with. Look at this haul of individual honours.

That is some career. He even almost played for Middlesbrough in 2002 from Independiente for £6.9 million. Of course, Manchester United hijacked the deal but promptly suffered some instant karma when it took him nearly nine months to score his first goal for them and his 17 goals in 98 games was the worst of his whole career. See, that’s what happens if you mess with the Boro, son.

He’s a founding member of Fundación Alejandra Forlán, a charity dedicated to preventing dangerous driving, headed by his sister who was paralyzed in a car crash. Oh and he was the last La Liga top scorere before the Ronnie & Lionel duoply. That’ll be Diego Forlan, then.

What have they done to deserve this then?
This week finally saw him officially draw a line under his playing career.

“After 21 years I made the decision to end my career as a professional footballer,” he said in his retirement announcement. “A beautiful stage closes full of great memories and emotions but another of new challenges will begin. Thanks to all who in one way or another accompanied me on this path!”

Starting his professional career in Argentina with Independiente, he was quickly noticed by European clubs after scoring 40 in 91 games. It should’ve been a good move to Manchester United, who were still a force to be reckoned with (that seems a long time ago now, doesn’t it?), but although he always worked hard and had the drive and enthusiasm, it just didn’t happen for him.

A move to Villareal, where he scored a goal every two games, proved how great he actually was. Then he had an imperious four years at Atletico Madrid as he notched up 96 in 196. His peak years revealed a man who was lethal and seemed to fly in on goal with a hawk-like, gimlet eye and was one of those strikers who you never thought would miss.

Luis Suarez, his international strike partner, was quick to praise him: “I will never forget how you treated me from the beginning, I am grateful for the moments shared with you. Love you very much.”

Throughout he seems to have had a personality that endeared him to his fans. Even at Old Trafford, despite his struggles, he was still a fan favourite and attracted more sympathy than ire. We even sold a lot of ‘I Saw Forlan Score’ t-shirts, which went to prove that there was more fun than fury around the situation. His two goals at Anfield certainly cemented his unusual legend. He’s said he even plans to go and stand in the away end at Anfield in disguise when United play them to experience the atmosphere again.

And when you look at the goals he scored for United, there were some real beauts. The lad had such a deceptively powerful shot on him and was just so direct.

He had a piercing, almost swooping, fast-footed running style that made him appear to be gliding across the turf almost effortlessly. The tousled, highlighted hair and headband gave him a dashing appearance. With a chin that seemed shaped to a point and a substantial beak on him, it gave him a kind of streamlined, aero-dynamic appearance, as if his vaguely raptor-ish features were actually pointing towards goal.

Having a playing career for 21 years is some achievement. You’ve got to admire someone who just isn’t prepared to stop playing at 34 or 35 but carries on, touring the world as a man with a Golden Boot, firing in goals on several different continents. It speaks of a player who just never tired of the game, even after the glory days in Spain were over.

Media Reaction?
The Guardian ran an agency piece to note the end of his glittering career.

The Sun headlined their essentially identical piece ‘Forlan In Love’, which made no sense, as he’s not in ‘in love’ nor has he ‘fallen’. Does everything in that paper have to have a pun, no matter how inappropriate or desperately contrived? Do they fear their readership cannot grasp what a story is about unless they force-feed it to them in this manner? It really is very, very weird.

BBC Sport ran clips of his five World Cup goals from 2010, which is as good a tribute to him as anything. Some absolute crackers.

GQ Magazine’s website ran a smashing Andy Mitten piece about our man, detailing his experiences working on columns with him, meeting him at the World Cup and saying what a helpful chap he was.

Anyone grumpy about it?
Not even a United fan with a long memory had anything bad to say about our hero. Why would they? This was a fantastic player who gave joy to many on some of the biggest stages. In fact, just watching his goals in researching this has really made my morning.

What the people say
His wide appeal was proven by appreciation of his work in Spain and even Manchester. It’s notable just how a player can win the hearts of fans to the point where they will still sing a song about him 15 years after he’d left, even when they didn’t perform especially well. As Danny Kelly is fond of saying on the Trans Euro Express show: just because you fail in the Premier League doesn’t make you a bad player.

We start with our traditional haiku from @4_4_haiku:

And now to you:

‘Sure he’ll always regret not signing for the Boro.’

‘We still sing about him when I go to Old Trafford. Considering he didn’t do brilliantly on the pitch (bar that Liverpool game) it says a lot about the impression he made.’

‘I was reviewing the papers on BBC Radio Cleveland when news came through that he’d been waylaid at Heathrow by Man Utd. I was present at Old Trafford when Boro won, he was atrocious and was substituted. “What a waste of money…”. Karma.’

‘The man TAMED the Jabulani.’

‘I always found it amazing just how good he became after Man U. It just goes to show unfair it is to judge a player based on one club. To go on to win what he did…shows him to be an outstanding forward.’

‘Also unwittingly helped British football TV punditry reach its nadir. I think a lot of people started to properly get fed up of Hansen & Shearer around then, in part when they were so sniffy about his prolific goalscoring, because as a youngster he’d struggled at Man Utd.’

‘A strong example of how players can “fail” at a Premier League club and still end up enjoying successful careers. Scored heaps of goals in Spain and had a stellar 2010 World Cup.’

‘My favourite moment of his at United was when he finally scored against, I think it was Southampton, and he couldn’t get his shirt back on. It’s a shame he never worked out in England because he was so good at Atletico.’

‘Loved him, what a player!’

‘My dad, to this day, calls him “Diego Birtles” and thinks it’s hilarious.’

‘I was convinced throughout his time at Utd that we were all being pranked by a reality show and Forlan was actually a hairdresser from Montevideo posing as a pro footballer… but then his shoot-on-sight policy really grew on me.’

‘Was there when he finally scored his 1st Utd goal. One of the best cheers at OT for quite some time. Scored some absolute thunderbastards for us too.’

‘Always looked happy to be playing which immediately makes me like a player.’

‘His 2010 World Cup performance was scintillating.’

‘His partnership with Aguero was electric, and indeed that time was my favourite era of La Liga. Loved a long range screamer, but the quality kind that was entirely meant.’

‘Always played with a huge smile on his face. Had me viewing Uruguay favourably, until that penalty save dance by his teammate took the sheen off. Will never forget his difficulty getting his shirt back on, we recreated that many, many times.’

‘As a Man U fan I really respect him – when he couldn’t score he put in an incredible shift & there were glimpses of the amazing talent he had. Was absolutely delighted for him when he finally scored & I’ve followed his career ever since. Seems like a genuinely nice bloke as well.’

What Does The Future Hold?
For a man with his cosmopolitan, globe-trotting experience, one who speaks five languages, it seems unlikely that he’ll pursue a typical post-playing career of golf and TV punditry. He is far too sophisticated and intelligent to go down that default route. You’d hope he might be able to find a role in FIFA, an organisation notoriously short of people with integrity and intelligence.

As a married father of three, living in Montevideo, the glowing embers of his career should keep his heart warm for many years. Cheers Diego and thanks for all those goals.