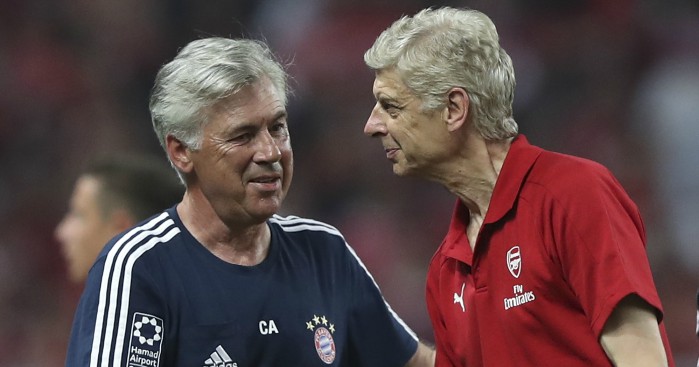 Arsenal are interested in former Bayern Munich, Real Madrid, AC Milan, Chelsea and Paris St Germain manager Carlo Ancelotti as a replacement for Arsene Wenger if he leaves the club this summer, according to the Evening Standard.

Ancelotti has made no secret of his desire to live and work in London again and is set to return to England with his family soon after being sacked by Bayern in September.

The Italian – who has won three Champions League titles – is apparently seen as ‘a serious candidate’ because he is familiar with the ‘head coach’ role which will be favoured at Arsenal once Wenger has vacated the hot seat.

The club has been moving away from their dependency on a manager with new appointments to deal with player contracts and medical operations. Raul Sanllehi will join the club from Barcelona as head of football relations next month.

Wenger has almost 18 months remaining on his contract but ‘Standard Sport understands senior figures at the club believe the 68-year-old’s time in charge may end earlier and there is a sense behind the scenes he could give serious consideration to cutting short his contract’.

Former Arsenal midfielder Mikel Arteta has also been linked with the manager’s job but he has no experience.