Home All The News Ancelotti slams Everton display: ‘Everything was wrong’ 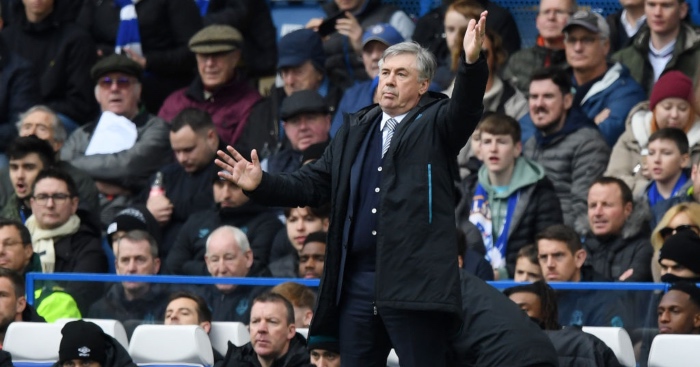 Everton manager Carlo Ancelotti failed to find a positive in his side’s performance as they were spanked 4-0 by Chelsea at Stamford Bridge.

The Toffees made just four tackles in the first half on Sunday as Mason Mount and Pedro put Chelsea into a two-goal lead before the break.

Everton failed to wake up and two goals inside 10 minutes of the second half put the contest to bed, leaving Ancelotti with a simple assessment to make of his side’s performance.

“I didn’t think we were in the game, we were slow. We weren’t compact. It’s difficult to say because everything was wrong today,” the manager told Sky Sports.

“So we have to be focused to try to analyse the game, what we did wrong and look forward.

“We were too slow, we lost a lot of duels in midfield. Of course, we were not in the game so usually we are used to playing a different game. Today we were not good enough.”

Everton‘s next game sees them host Liverpool in the Merseyside derby next Monday.

“We didn’t fight, we lost a lot of duels like I said,” Ancelotti continued. “Everything was wrong today, the strategy was wrong, the fighting spirit, the attitude, so we have to look forward for another game.

“It will be difficult but we will be motivated and it’s a derby and we will do our best.”