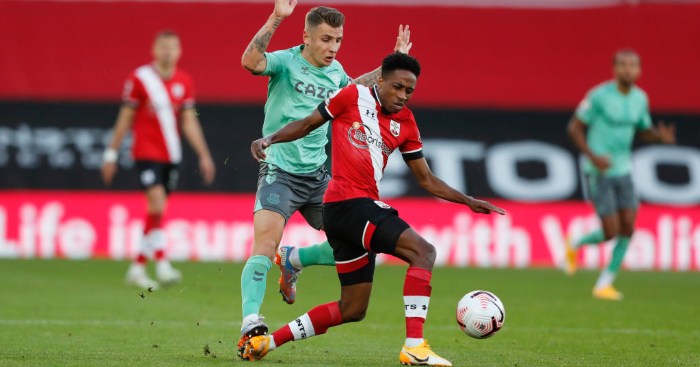 Everton boss Carlo Ancelotti has slammed the decision to give Lucas Digne a red card in their 2-0 defeat to Southampton.

The Saints ended Everton’s unbeaten start to the season on Sunday. Ralph Hasenhuttl started the game strongly and were two goals in front before half time.

They scored twice in just eight first half minutes to take control of the game. James Ward-Prowse opened the scoring before Che Adams added to their advantage shortly after.

F365 Says: Any serious club should throw themselves at Hasenhuttl

Stuart Armstrong had a goal disallowed for Southampton, so it remained 2-0 going into the break.

Everton were unable to get back in the game in the second half. Digne was shown a straight red card in the 72nd minute to top off a torrid afternoon for Ancelotti’s side.

The Frenchman was chasing down Kyle Walker-Peters but he stood on the back of the defender’s ankle. Digne appealed the decision on his way to the tunnel, but the VAR officials stuck with Keith Friend’s decision.

Despite this defeat, Everton remain top of the Premier League on goal difference. They are level on 13 points with Liverpool. This win for Southampton moves them up to fifth in the table.

Ancelotti reacted angrily to his team’s performance and the red card when speaking post-match to Sky Sports.

“We didn’t play well, Southampton were better than us and they deserved to win. Sometimes you are not at your best, it came after a really good run for us, now we have to look forward with the same spirit and belief.

“We tried to get back into the game, we had some good control after half-time.

“The red card was a joke, it was not intentional, for sure it was not violent. Maybe it was a yellow. Maybe all this talk all week against Pickford, against Richarlison, affected the decision and if so it’s not right, it’s not fair. We will appeal, for sure.

“I told the players winter is coming and we will have to react.”