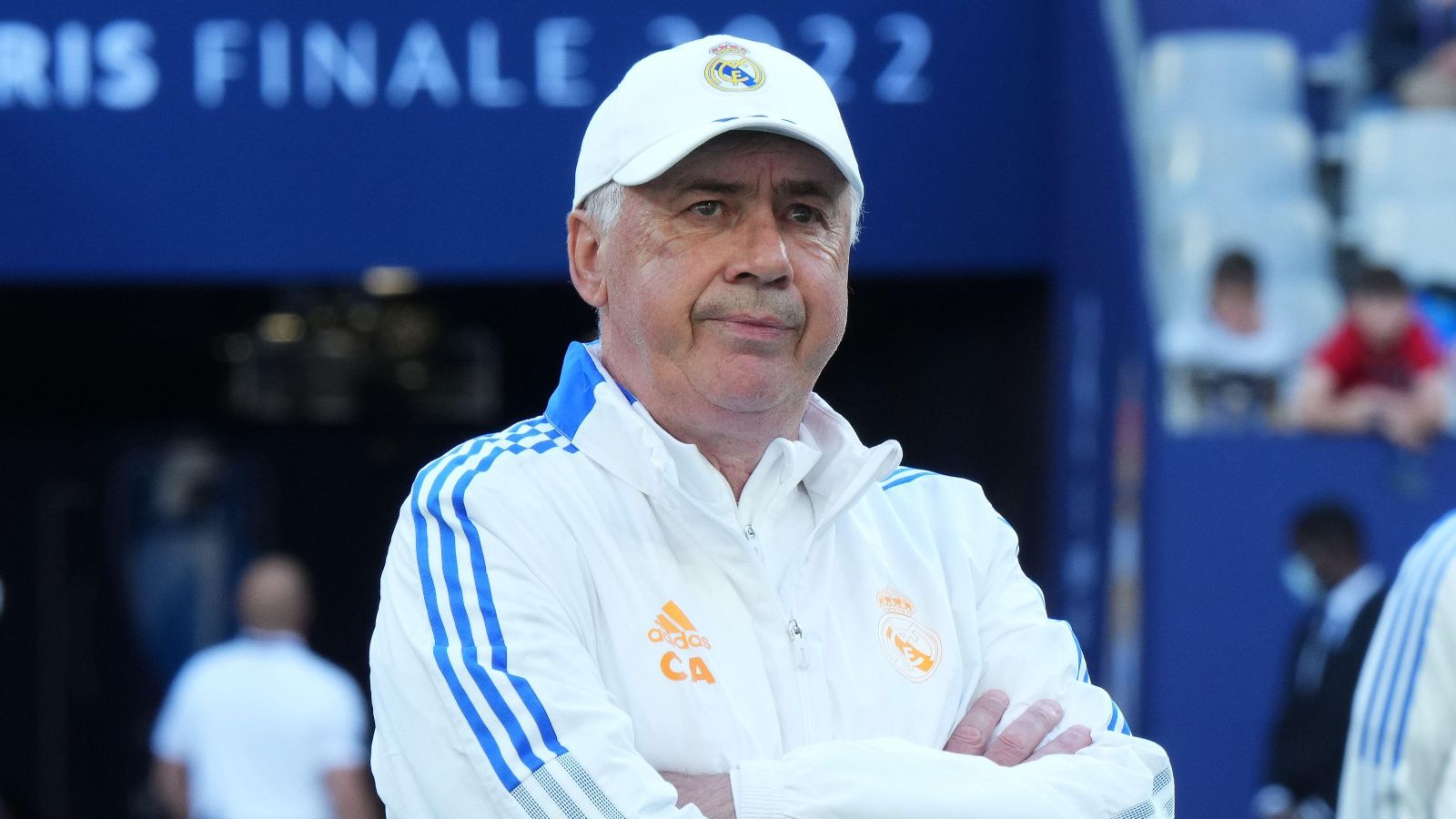 Carlo Ancelotti has insisted that Real Madrid’s players are ‘very calm’ ahead of the Champions League final against Liverpool.

Ancelotti won the European Cup twice with AC Milan as a player. He later helped them lift the title in 2003 and 2007 while he was manager. He also won the trophy with Real Madrid in 2014.

After spells at Bayern Munich and Napoli, Ancelotti took over at Everton in December 2019.

The Toffees finished 12th that season and 10th in what proved to be his only full campaign at the helm before making a stunning return to the Bernabeu this time last year.

That decision has proved a masterstroke, with Ancelotti helping Real to win LaLiga at a canter and leading the comeback kings on a rollercoaster ride to Saturday’s Champions League final against Liverpool.

“It is a big contrast,” former Everton boss Ancelotti said. “I’ve thought about that, how things were very different last year.

“Then there was a phone call with Jose Angel (Sanchez) and the president (Florentino Perez).

“This year feels like a long time. I’m treating it naturally. Getting to this final, it’s a big success for us, we know how demanding this club is – it’s all about the club’s history.

“It’s been a big feat to get to this point. We think we’ve had a very good season and we are very close to achieving something huge this season.

“We are very calm in the camp. I’m here to manage the game, with the veteran players helping the younger ones, to have a good atmosphere around the squad with lots of excitement and confidence.”

Karim Benzema and Vinicius Jr. were locked in during Carlo Ancelotti's speech 😤 pic.twitter.com/ycN2YzMAgf

Ancelotti’s exit stuck in the craw of many at Goodison Park but the blue half of Merseyside are sure to be behind their old manager in Saturday’s Stade de France showdown.

“I know that the Evertonians support us tomorrow, for sure,” Ancelotti said with a laugh.

“I know there is a big rivalry on Merseyside. I have a good memory from my time spent in Liverpool on the blue side and I’m sure they will support me tomorrow.”

Ancelotti was relaxed and assured as he appeared in the pre-match press conference – little surprise considering his unmatched experienced preparing for this occasion.

“This is something you dream about, but you can’t control it,” he said. “It’s my fifth final, I have good memories of all of these finals.

“It’s a bit strange to think about it but I think the best (performance) was the final against Liverpool in 2005. But we lost it (on penalties having led 3-0) at AC Milan.

“I’m not going to tell the players to play badly tomorrow because of course we want to give our best but anything can happen in a final. We have to be ready for everything.

“We’ve had time to prepare well for it, I think we head into it in very good shape.

“We’re going to give our best, of course, but I’m not convinced that is enough to win it.

“That will give us a better chance if we play better. As for whether that’s enough, I don’t know because there are things you can’t control in football.

“It’s my fifth final and there’s always a similar feeling in the build-up.

“It’s always fantastic to be involved and you have to enjoy it without thinking too much about what might happen.

“We have to enjoy it until the referee blows the whistle. Then it will be another story that will be written.”

Ancelotti says he has already settled on a line-up that will surely include sharpshooter Karim Benzema.

The France international has been in spectacular form under Ancelotti, scoring 15 goals in this season’s Champions League alone.

“Going back to my first stint at Real Madrid, Karim Benzema has always had so much character,” well-travelled Ancelotti added.

“But he’s grown in that department but his quality hasn’t changed. He’s always been very humble, as well.”