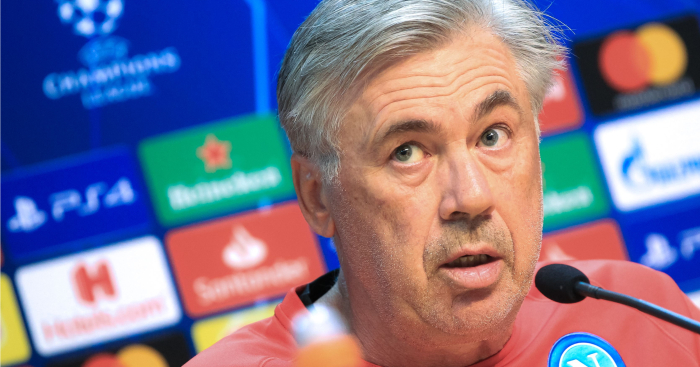 Napoli coach Carlo Ancelotti admitted their pre-season friendly hammering by Liverpool highlighted exactly how not to play against Jurgen Klopp’s side.

The Reds were 5-0 winners when the pair met in the Aviva Stadium in early August, with goals from James Milner, Georginio Wijnaldum, Mohamed Salah, Daniel Sturridge and Alberto Moreno.

Ancelotti, facing Liverpool for the ninth time in his decorated career, knows they cannot afford to be as open against a team he rates as one of the best in Europe.

“The Dublin match is an experience, it has taught us many things, for example how not to play against Liverpool,” he said.

“It was a friendly match, we did not want to focus on the opponent.

“The test will be very difficult, we will not have much time to think about what to do on the pitch, but we have a lot of confidence for tomorrow’s match and we will do it.

“Liverpool have improved a lot, they managed to reach the final last year and they started the season very well.

“I think they have become one of the strongest teams in Europe. They have a great physical condition, they play with intensity and so they manage to overcome the challenges of the Champions League.”

Ancelotti said he was surprised by the appointment of Hungarian Viktor Kassai as referee.

The Italian criticised the official in April 2017, saying he “wasn’t up to the task” of a Champions League quarter-final after his Bayern Munich side were eliminated by Real Madrid, with midfielder Arturo Vidal sent off.

“Kassai reminds me of a bad memory for my former team and I am surprised by this appointment,” said Ancelotti.

“Not a long time has passed. Time usually heals things, but does not cancel them.”

Napoli’s Lorenzo Insigne, who has scored five times this season with three in last three, singled out Roberto Firmino as Liverpool’s key man.

“Firmino is the most decisive player because he comes to play between the lines and opens the spaces to his team-mates,” he said.

“I hope together with my team-mates to put them in trouble and be able to make chances.”