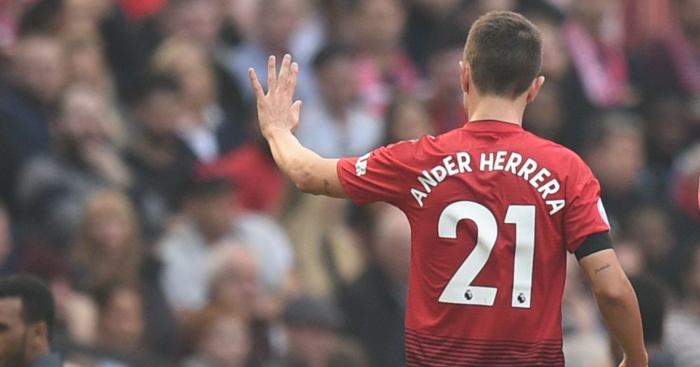 Ander Herrera has described choosing to leave Manchester United as a difficult decision but one he does not want to dwell on.

The Spanish midfielder confirmed his expected departure on Saturday, bringing to an end five years at Old Trafford.

The 29-year-old’s deal expires at the end of the season and he is believed to have committed to Paris Saint-Germain over another option.

“This is not an easy day or an easy decision, but sometimes in life you have to take decisions,” he told the club’s official website.

“Sometimes the timing is just not right and you have to move on. I don’t want to be sad, I want to thank all the fans for all they have done for me in the last five years.

“I have enjoyed so much playing for this club, I have felt so privileged to represent this club every time I have done it.”

He has done that 189 times since joining from Athletic Bilbao in the summer of 2014, winning the FA Cup, EFL Cup and Europa League along the way.

“I have felt part of this club when I have travelled all around the world and been recognised as a Manchester United player,” he added.

“I owe the fans a lot. When you leave such a big club you lose much more than what they are losing. I cannot lie – I wasn’t born a Manchester United fan, but I want everyone to know that a part of my heart will always be a red devil.

“When you play almost 200 matches for this club there is no other way to look back (other than positive).

“I have some memories in my mind that I cannot forget. Of course the trophies we have won together like the European trophy we won in Stockholm [in 2017] – that was special.

“The FA Cup win against [Crystal] Palace [in 2016], the League Cup as well [in 2017] because it’s an important trophy, and the Community Shield against Leicester [in 2016]. But overall I will never forget the way I have been treated by the fans.”

Press Association Sport understands Herrera was intending to stay at Old Trafford and sign a contract extension, only for a lack of communication to see him formulate a plan to leave.