Home All The News Ander Herrera: Man United’s bit-part player of the year 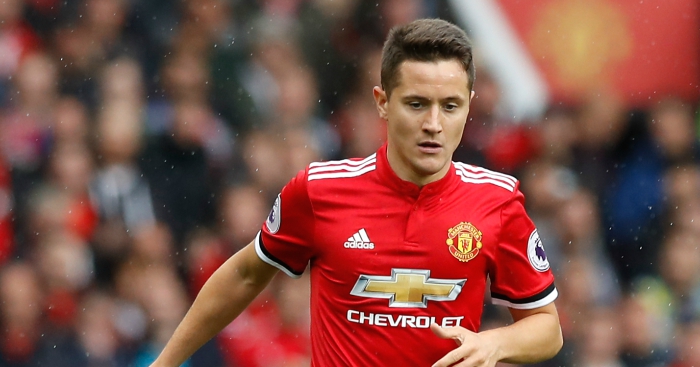 “It would be easier to get 20 new players and start with them from zero than to get a squad that was previously with a top manager but with different ideas than mine.”

Jose Mourinho is not a boy who is grateful when he inherits hand-me-downs from other children. Two months after his appointment as Manchester United manager, the Portuguese spoke of his regret at having to ask Louis van Gaal’s lethargic leopards to change their spots; he would much rather just buy new animals.

Of the six signings Van Gaal made in his final summer at Old Trafford, his successor quickly sold three – Memphis Depay, Morgan Schneiderlin and Bastian Schweinsteiger. It has taken a season for Anthony Martial to establish himself under Mourinho, and Matteo Darmian has never truly been accepted into the family. Sergio Romero, willing to play back-up to David de Gea without kicking up a fuss, is the odd one out.

The trend goes as far back as the summer of 2014. The reasons for Luke Shaw’s failure to develop in his three years at United can largely be attributed to the physical and mental effects of long-term injury, but his status as a Van Gaal signing has acted against him. Within almost 18 months, he has gone from his club and country’s future left-back for the next decade, to yet another footballer incapable of living up to Mourinho’s standards.

It felt like Ander Herrera would be different. The Spaniard survived the ignominy of being Van Gaal’s first signing to become Mourinho’s on-pitch lieutenant: a battling, growling, snide midfielder who, when necessary, could display his innate ability. His man-of-the-match showing in April’s victory over Chelsea, when he took a brief hiatus from starving Eden Hazard of oxygen to score and assist in a 2-0 win, was his crowning performance.

It was brains fused with beauty and brawn, a display that added weight to the growing calls for Herrera to be appointed club captain. “All the United captains have won everything for the club but I haven’t yet,” he said in the summer, dismissing his own credentials. But to even be a part of that conversation was testament to his progress.

Fortunes have been reversed this season. United’s reigning Player of the Year has been a peripheral figure. His only three Premier League starts this season have coincided with the only three Premier League games United have failed to win. The club have not won any of the last six league games Herrera has started, dating back to April. The absence of Paul Pogba opened the door for his teammates, but Herrera is one of those who has tripped and fallen flat on their face.

Mourinho has found himself a new toy. Nemanja Matic was appointed ‘assistant coach’ in the summer; Herrera was only ever an interim. The stop-gap holding midfielder was demoted from first choice to squad player in the course of one transfer window.

The nature of Mourinho’s ruthlessness is clear. Herrera was the one pupil brave enough to raise his hand when the manager looked around his squad for a midfield enforcer last summer. “I thought I had to add something to my game,” Herrera said in June. “I had to give more options to the manager.” Michael Carrick has never resembled a destroyer, while Marouane Fellaini still carried the stench of Van Gaal. Schneiderlin and Schweinsteiger were only sold in January and March, but their fates had been sealed long before.

In Herrera, Mourinho found a midfielder he could mould, a square peg whose edges he could file and squeeze into a round hole. The Spaniard was Mourinho’s clone, adopting his every trait: combative, belligerent, hated by opposition fans, beloved by his own.

The 28-year-old made a concerted effort to embody the characteristics of Mourinho. “In the first 30 or 35 minutes, we didn’t play good,” he said after the defeat to Huddersfield, sounding every bit like his manager. “They were more passionate than us, more aggressive. We cannot accept that. We have to analyse where we lost today. We lost almost every ball. That cannot happen in the Premier League.”

But then, like a father dressing his son in his image but then publicly ridiculing him, Mourinho made an example of one of his most loyal disciples. “I heard Ander Herrera in his flash interview saying the attitude and desire was poor,” was the response. “Oh my God, when a player says that and feels that, I think they should all go to the press conference and explain why.”

As the master admonished his old dog for the new tricks he himself had taught him 12 months prior, Herrera’s new role became clear. He remains an adept handyman capable of fulfilling but never excelling in a number of roles; in Matic, Mourinho has the specialist he craves.

Herrera’s United career has finally reached full circle. A player forgotten and overlooked by Van Gaal, then moulded, cherished and embraced by Mourinho, has now become little more than a bit-part player.