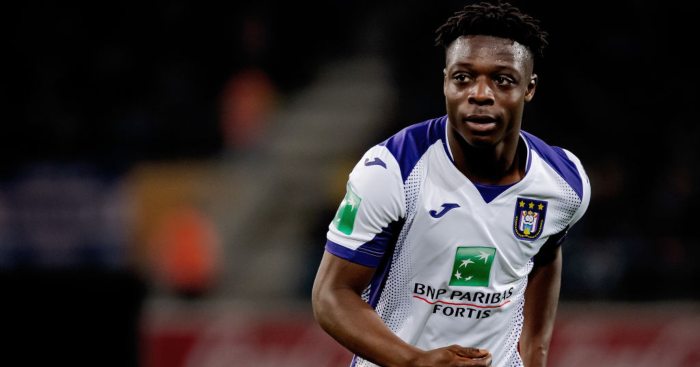 Anderlecht youngster Jérémy Doku came close to signing for Liverpool, according to his parents.

Liverpool have brought in the likes of Sepp van den Berg from PEC Zwolle and Joe Hardy from Brentford over the last year as they have looked to boost their youth ranks off the back of the first team’s success.

Doku has scored six goals in 24 appearances for Anderlecht this term in the Jupiler Pro League and looks to have a promising future.

And Doku’s parents claim Liverpool had the chance to sign the 17-year-old as they were invited to their training ground to meet Jurgen Klopp.

FEATURE: Liverpool in our Premier League winners and losers

“At the age of sixteen Jérémy could sign a pro contract with Anderlecht, but even then Arsenal, Liverpool, Chelsea, Man City, Ajax and PSV were interested,” they told Het Niewsblad (via Sport Witness).

“We then visited clubs like Liverpool and Ajax, but Stellar Group left us the choice.

“My (David, his father) preference was Liverpool. How we were received there, damn.

“Trainer Klopp explained how he saw a potential successor to Sadio Mané in Jérémy. Steven Gerrard showed us videos with tactical analysis.

“At the training complex Mignolet, Mané and Wijnaldum came to talk to us. Yet Jérémy was distracted by the talk. Liverpool panicked.

“We talked about Chelsea and they thought he was going to sign there while we were just chatting about our youngest daughter. She’s called Chelsea.

“Van Holsbeeck (former Andelecht boss) was convinced that he would lose Jérémy almost for free to Liverpool and wanted to make the most of it.

“But Anderlecht did everything to keep our son. They handled it cleverly with that video of Romelu Lukaku. If Jérémy hesitated for a moment to leave, it took away the last doubt.”