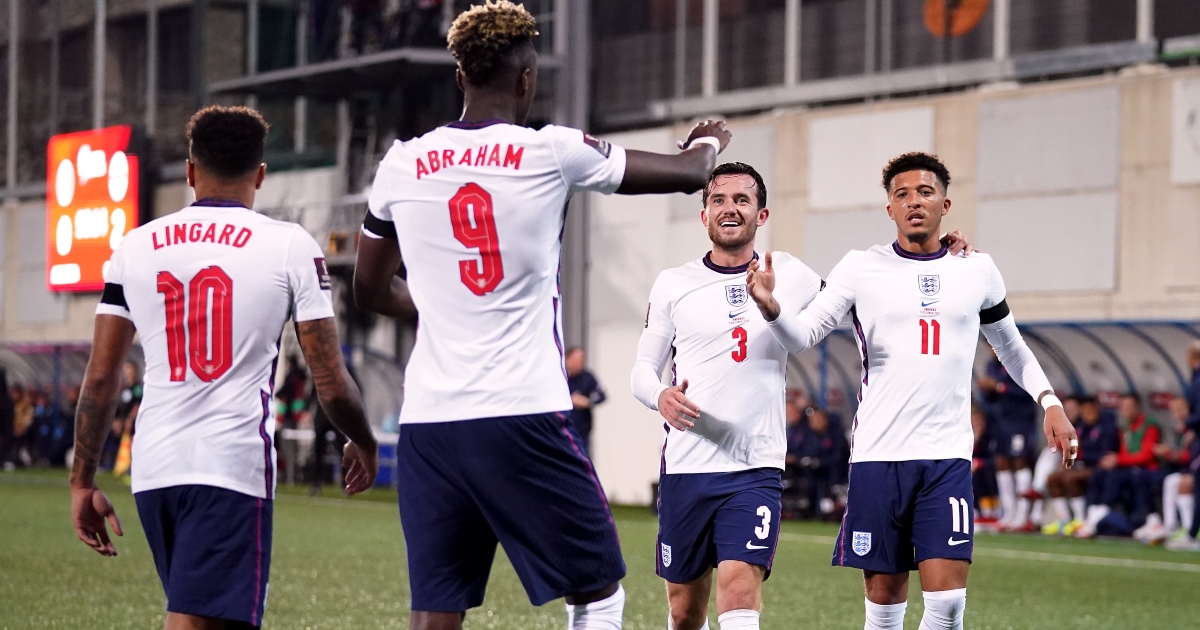 Jadon Sancho and Ben Chilwell both impressed but Phil Foden starred in England’s thrashing of Andorra. For Jesse Lingard, it wasn’t such a good night…

Sam Johnstone
Had to get his knees dirty/burnt with one fine late save which, as it turned out, didn’t matter because the Andorran shooter was half a mile offside. Then he became the first England keeper to register an assist when he hurled the ball into the opposition half for Jack Grealish to score his first international goal. Three caps, three clean sheets for England’s No.2.

Kieran Trippier
With Phil Foden and Bukayo Saka ahead of him, there was little need for England’s skipper to go bombing on, aside from as a preventative measure for boredom. England focused their attack on the opposite flank so Trippier’s forays forward were fleeting, instead the Atletico Madrid defender sat behind Foden to allow Chilwell considerably more freedom on the left.

John Stones
Hardly tested defensively in his hour on the plastic, but picked up a daft booking just before half-time, taking the bait upon another Andorran niggle. Didn’t need to dribble into midfield with Ward-Prowse and Foden both keen to take possession from deep.

Conor Coady
The Wolves defender hasn’t been in his best form at club level and he hardly needed to be at his sharpest in Andorra. His most notable contributions were having England’s first attempt on goal with a header from Ward-Prowse’s free-kick, and copping an elbow for which Marc Rebes took a run up yet somehow avoided a second yellow card. .

Ben Chilwell
The Chelsea defender has had a decent week – Lord knows he needed it. He followed up a goal for Chelsea last weekend with his first for England to get the ball rolling, but only after a lengthy VAR check eventually decided that Sancho was onside. Chilwell, who had more touches than anyone else on the pitch, and Sancho combined very effectively on the left, which is from where England’s biggest threat came, especially with Foden looking to switch play every time he was allowed to get his head up. A very positive evening for Chilwell after spending the Euros as third-choice in a squad with two left-backs.

James Ward-Prowse
With no need for a defensive midfielder, Ward-Prowse got the nod ahead of Jordan Henderson and the Saints star offered a controlled performance at the base of Gareth Southgate‘s midfield, keeping the ball moving while sitting in to allow Foden and Jesse Lingard the freedom to search for pockets of space. There was little need for Ward-Prowse to penetrate, and he performed his duties exactly as Southgate would have wished. Got on the scoresheet but only by ruining the Andorra keeper’s big moment by smashing in a rebound after his penalty was saved.

Phil Foden
You would’ve backed Foden to find Shergar with one of his diagonals from a deeper position to the right of Ward-Prowse. The City star was compared to Tom Brady by Roy Keane at half-time after a first-half passing clinic which continued into the second period. Just a sensational player in wonderful form right now for whom Southgate must find a place in his best XI. Seeing him thrive in a quarter-back role should enhance his prospect of more international minutes.

Jesse Lingard
No shots or key passes on a disappointing evening for Lingard in a roaming role which started from the left, but despite England so heavily favouring that flank, the Manchester United attacker struggled to get on the ball, let alone penetrate with a pass or a dribble.

Bukayo Saka
Netted England’s second with a fine finish following an even cuter first touch. But it’s difficult to recall any other major contribution from the Arsenal attacker – I had to check in the second half that I hadn’t missed his substitution. It obviously did not help Saka that England’s attack was so heavily weighted down the left, with the 20-year-old having two-thirds of the number of touches Sancho managed with 20 minutes more than his team-mate.

Tammy Abraham
Patrick Bamford struggled to make an impression against Andorra last time out and through the first half, Abraham was also well-shackled. Which would have been a concern at half-time since he was being marked by a 41-year-old who looked twice that. So it would have come as a huge relief to lose his veteran minder just before the hour mark to nudge Sancho’s cross past the flat-footed Andorra keeper. Quite simply, his goal was the difference between a good night and a bad one. With all the attacking options at Southgate’s disposal, Abraham simply had to find the net, regardless of what else he did outside the box where, at times, did not exhibit the sharpness of a player finally enjoying regular football.

Jadon Sancho
Once the winger, playing on the left, had sussed that Andorra are sh*te, Sancho began to strut, showing the type of confidence we haven’t seen from him in a Manchester United shirt. He and Chilwell took it in turns to dart inside when Foden picked up possession and Sancho began to relish running at his full-back, at one point ending the life of Chus Rubio with the filthiest of nutmegs. Ildefons Lima’s 41-year-old hamstring suffered a similar fate when Sancho scorched past him after teeing up Abraham for his goal.

Ildefons Lima (41 year old) got burnt by Sancho and then his hamstring went 🤣 pic.twitter.com/Kr8hK2foxU

Fikayo Tomori (on for Stones, 60)
The centre-back became the fifth AC Milan player to represent England, and none of the four who went before him can have had easier debuts.

Jack Grealish (for Sancho, 72)
The £100million star came off the bench, looked like he was playing at around 70 per cent, yet still won a penalty and scored his first international goal. All too easy for him.

Mason Mount (for Lingard 72)
Struggled to get on the ball in a similar way to Lingard, especially with Grealish ahead of him and Chilwell continuing to overlap.

Ollie Watkins (for Abraham, 80)
Almost got on the end of one low Grealish delivery as he ran around for 10 minutes desperately looking for an opening.