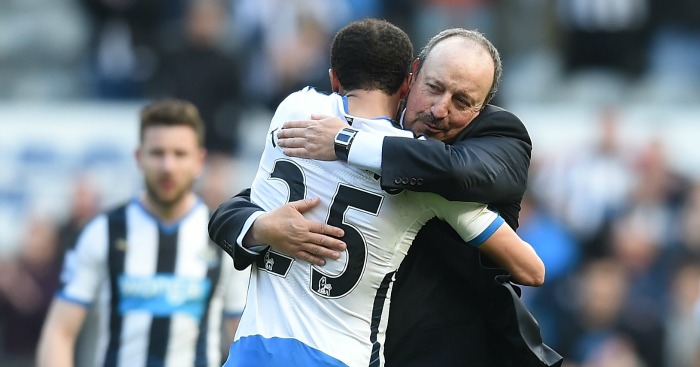 “As soon as I heard Barcelona/Newcastle/Colchester/Elgin were interested in me, there was only one place I wanted to go.”

The cliché is now so established in the lexicon of football that even the most one-eyed of football fans cannot feel special; it’s a brave man who admits he joined your club because he had sod all choice.

And yet with Andros Townsend, those tired old sentiments always sounded sincere. Even a Newcastle facing a relegation fight presented a phenomenal opportunity for a player whose style exactly suits a fanbase desperate for a hero.

Townsend’s schtick of working incredibly hard to win the ball but then almost always cutting inside and thwacking it towards goal was not enough at Tottenham. Back when he had even a cameo role to play at the club, Townsend’s trick would prompt audible groans from fans.

They had Harry Kane’s goals, Christian Eriksen’s vision and the emerging dynamism of Dele Alli, so they were not impressed with Townsend’s limited repertoire. Mauricio Pochettino’s side had designs on the title and a style ill-suited to a footballer who was predictable in his occasional brilliance. Narrowly miss the target from 25 yards for Tottenham and you will be berated for losing possession; do that for Newcastle and the crowd are on their feet applauding your effort.

Perhaps Newcastle fans will eventually tire of Townsend, but for now he is exactly what they need. Starved of players who look like they give a sh*t, they are greedily feasting on a player who really does. Townsend cares; it’s etched on his face every time he plays.

While some have waltzed into St James’ wearing tuxedos and an air of superiority, Townsend has arrived with his sleeves rolled up and the knowledge that he has the chance to become a hero at a massive club. Barring an England career that could become a bizarre career footnote, Townsend has been Mr Not Quite, bouncing around loan clubs without ever being truly loved. Spurs fans have never sung about ‘one of their own’ with Townsend on the ball. Literally nobody mourned his £12m exit.

On Saturday against Crystal Palace came another typical Townsend performance. No other Newcastle player had more than two shots (he had four) and no Newcastle player made more tackles than his five. Hard work allied with confidence is a valuable combination in a relegation battle.

The free-kick was sublime, Townsend’s technique faultless. It was one of four shots, all taken from a section of the pitch measuring 15m squared, but Newcastle fans will not care. Nor will they care that Townsend created no chances for his teammates or found a teammate with any of six crosses. He is a match-winner in a team desperately short of match-winners.

Rafa Benitez did not sign Townsend but he must be awfully glad that somebody did. If you are building a survival bid on organisation, swift counter-attacks and efficient use of possession, you need players with application, energy, pace and directness. Townsend has all those qualities in abundance.

Newcastle may yet succumb to relegation, but the drop will be far more palatable with Benitez in charge and Townsend working – and we really do mean working – the wing.