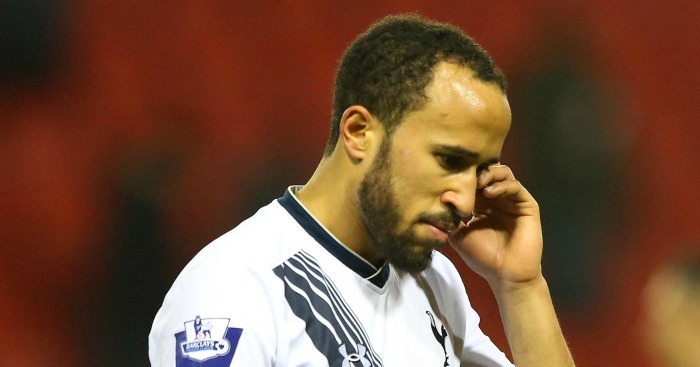 There are subtle clues. Friday marks exactly three months since Townsend last played a minute in any competition for Tottenham, and he last started a league game on April 11, 2015. Pochettino also effectively told the media that Townsend can go.

“Andros has not played in the last few months and he wants to play,” Tottenham’s manager says. “If some facility arrives [for him to leave], the decision is always from the club. I am not involved in the negotiations, I am the head coach.” Yet at White Hart Lane he stays.

Levy is renowned for playing tough during transfer negotiations but, in the case of Townsend, hardball has become immovable rock. Having placed a transfer fee of £14million on the head of his winger, Levy has priced out almost every interested suitor.

In Levy’s defence, approaches for Townsend on loan offer very little benefit to Spurs, particularly if they contain an option to buy for an agreed fee at the end of a temporary move. Having evidently decided that the player has no future at the club, a clean break is the only solution. Why would you let someone try before they buy, even if they contribute the majority of his wages.

Even with the £14m fee, which might seem highly optimistic on Levy’s part, you can understand the logic. Townsend may have no obvious place within Pochettino’s plans and preferred style, but it is easy to see why a 24-year-old winger with ten England caps might command such a price.

Newcastle last week paid £12m for Jonjo Shelvey, a year younger than Townsend but with less international recognition. Add in the premium typically paid for attacking players, and suddenly the fee seems reasonable. With a contract that does not expire until June 2018, Tottenham’s owner has no pressing need to sell at a price below his own estimation.

Yet with Townsend, there is always the flip side; the prosecution has at least as much evidence as the defence. To mimick the above paragraph, Newcastle last year paid £14m for Georginio Wijnaldum, a year older than Townsend but with more international recognition. You see where I’m going with this: Wijnaldum scored four times in 72 minutes against Norwich in October; Townsend has five in his entire top-flight career. Signing from abroad may be viewed as risky, but at 24 and with far less experience than his peers, so too is Townsend.

The last time he played 90 minutes in the Premier League was March 2014. Turning 25 in July, Townsend has started 34 Premier League matches. Add in a public spat with Tottenham’s fitness coach and subsequent disciplinary sanction, and the doubts start to creep in the suitors’ minds.

Even Townsend’s England career was a brief flicker of bright light rather than sustained sunshine. His reputation as Uncle Roy’s favourite nephew has now been consigned to the past. For all the fanfare, Townsend has played 281 competitive minutes for his country.

It was a warning from Andre Villas-Boas in September 2013 that must now be seen as a sadly accurate prognosis. It came the day that Townsend’s new contract was announced, three days after starring for England.

“Obviously when you get public and media recognition you have to tolerate it,” said Villas-Boas. “Andros has to step up his game. He is a great product of English football, but sometimes they are chased, sometimes a victim and sometimes guilty.”

Whoever is most responsible for Townsend’s pronounced downfall is unclear; it’s more important that he is permitted to take the next step forward. To say that it’s now or never would be hyperbolic, yet the concern is that Townsend’s career is now in an extended purgatory. He is caught in a trap, overvalued but underused.