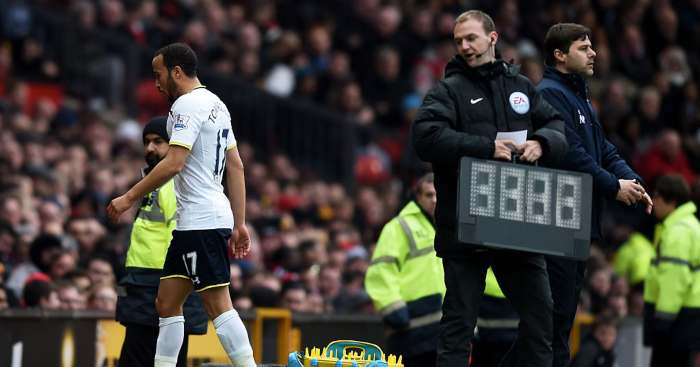 Andros Townsend has described feeling “bitter and angry” towards Mauricio Pochettino during his time at Tottenham but will “always be grateful” to the former Spurs boss.

The Crystal Palace winger had a breakthrough season at Spurs in the 2013-14 season under Andre Villas-Boas and then his replacement Tim Sherwood, in which he played 25 times in the Premier League.

The following season under Pochettino he played only 17 league matches, leading to frustration and the end of the road for him at Tottenham.

In the 2015/16 campaign, Townsend was involved in a on-pitch argument with Spurs fitness coach Nathan Gardiner after Pochettino’s side beat Aston Villa 3-1.

That was the last game Townsend played for Tottenham despite apologising about the incident.

“It didn’t end well and people probably think we (he and Pochettino) hate each other but I’ll always be grateful,” Townsend told The Athletic. “I was too young to take his messages on board.

“If he likes you, you would always be in his office. His first season, I struggled with confidence, form and fitness. I went from the main man at Spurs to struggling to get in the team. I was in the office every other week, going through clips. He spent so much time trying to get me back to where I wanted to be.

“I may have been bitter and angry at the time and resented him, but after time passes you realise I was in his office with him telling me how to improve. For the most part, we had a really good relationship.

“I needed a change, though — to move on, go down and take a step back up.”