Home All The News Ex-Man Utd man: ‘Neville collared me after telling Keane to f**k off’ 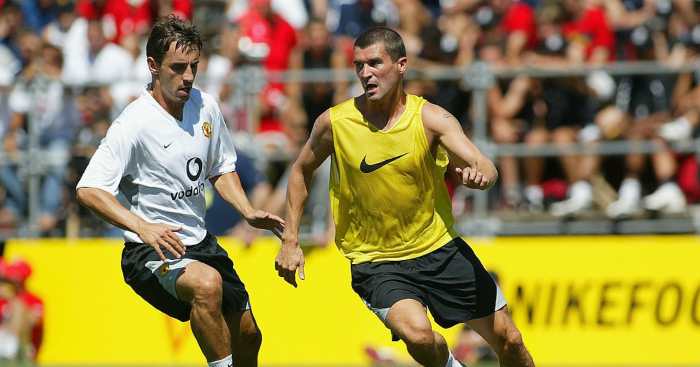 Andy Goram has recalled telling Roy Keane to “f**k off” at Man Utd before Gary Neville warned him that “we don’t talk to Roy like that down here”.

The former Scotland international made two Premier League appearances for Man Utd when he joined on loan from Motherwell in 2001.

Goram was drafted in by Sir Alex Ferguson to cover for injuries to Fabien Barthez and Raimond van der Gouw.

OPINION: Ghost games will lead to one of three scenarios…

The 56-year-old has revealed that there was no welcome party from Roy Keane as they clashed more than once and Goram has recalled the first bust-up between the pair.

“There were clashes between us. One day in training, we were playing a game of eight-a-side and Keane and Luke Chadwick were up front for my team.

“I always prided myself on the accuracy of my kicking, on being able to pick out a player from a distance, and that day I half-volleyed a peach right on to Chadwick’s foot.

“The kid snatched at it and ballooned his volley over the bar. Suddenly, I was the target of a volley of abuse from Keane. ‘Hey you, give me the f*****g ball,’ he screamed.

“The ­atmosphere was icy from that moment on, and on the way off the field Gary Neville collared me. ‘Goalie,’ he said, ‘we don’t talk to Roy like that down here. We just don’t’.

“It was a telling insight for me. Of course I respected Keane as a player, but I couldn’t have that.”