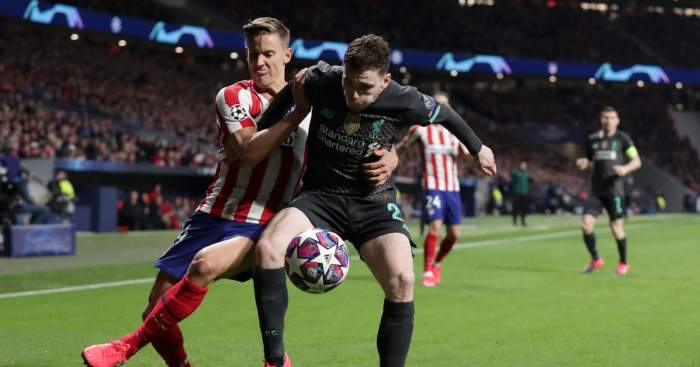 Andy Robertson says Atletico Madrid celebrated their Champions League last-16 first leg victory over Liverpool as if they were already through to the next round.

Saul Niguez struck after just four minutes at the raucous Wanda Metropolitano Stadium and after that Atletico retreated into an effective rearguard action to claim a 1-0 win.

Liverpool welcome them back to Anfield in the return leg on March 11 and Robertson has warned Atletico that they had better turn up prepared if they want to progress.

“Look that’s what he is you know,” Robertson replied when asked whether Diego Simeone’s celebrations looked like Atletico had won the tie. “When you’re not playing against them it’s probably great to watch.

“He’s full of enthusiasm, I think he was like that as a player and stuff like that. So look, we’ve got no problem with that, but you know like you said they’ve celebrated as if they’ve won the tie after the game.

“So let’s see. We’ve got a couple of weeks, we’ve got Premier League business to take care of, then they’re coming back to Anfield.

“We know our fans will be there, we know we’ll be there. So it’s up to them to come as well.”