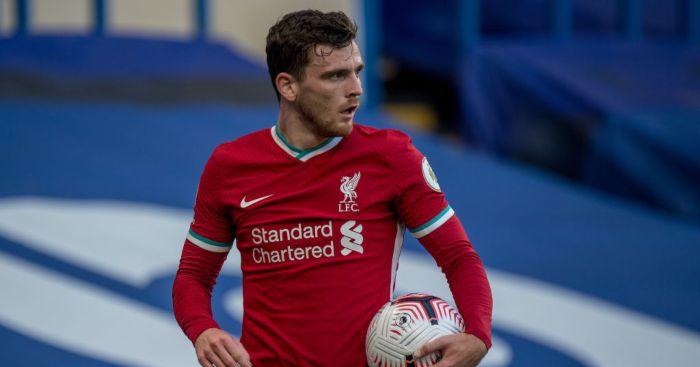 Andy Robertson thinks Liverpool team-mate Sadio Mane is “one of the best players in the world” after recalling a goal he scored last season.

Liverpool beat Norwich City 1-0 at Carrow Road in February last season on their way to lifting the Premier League title.

After 77 minutes the scores were level at 0-0 before a long searching pass from Jordan Henderson found its way to Mane in the area and, with his back to goal, the Senegal international managed to control the ball into a shooting position, before rifling into the net.

And Robertson believes very few players in world football could’ve scored a “goal like that”.

“Norwich away was one of our most memorable trips of the season,” wrote Robertson in the Reds’ title-winning book Now You’re Gonna Believe Us.

“The result in itself was something to remember as our 17th win in a row left us needing just five more victories to secure the title with 12 fixtures remaining.

“The way the three points were earned will also live long in the memories of all who were there. Sadio went through his full repertoire of skill, strength, speed of thought and top-class finishing to get the goal that took us over the line.

“It wasn’t even the best of balls that set him up, it was just a hoof up the park by Hendo! Seriously, it was a great pass but Sadio still had a lot to do when he received the ball and I’m sure Hendo would agree that, in this case, the run made the pass.

“For Sadio to bring the ball down, spin away from his marker, turn and finish with his left foot was incredible. That’s why he’s one of the best players in the world, for me. How many other players could have scored a goal like that? Not many.

“I know from experience how difficult he is to deal with because I see it in training on a daily basis. He can do the unexpected, he can beat you with his upper body strength, he can go past you with skill or fly past you with speed.

“As well as having that kind of talent, he has also become a lot more consistent. When he first joined Liverpool, Sadio was already really good but he has become even better because his level of consistency has improved so much.

“Against Norwich, people maybe didn’t think there was a chance when the ball was in the air, so for him to turn that situation into a goal – and a decisive one at that – was incredible.”