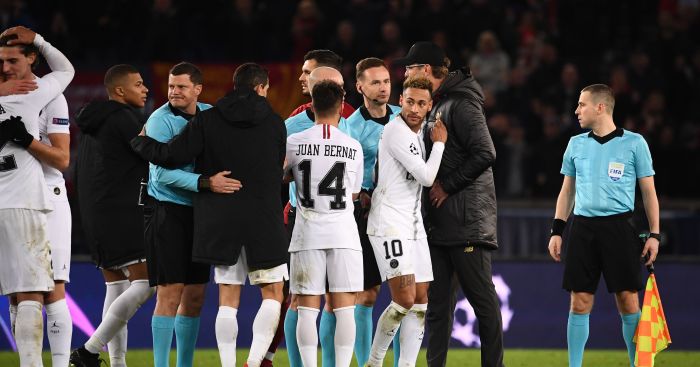 Angry Liverpool manager Jurgen Klopp criticised the refereeing of Polish official Szymon Marciniak for making his side look like “butchers” in their 2-1 Champions League defeat to Paris St Germain.

The Reds boss was unhappy with the hosts’ play-acting and highlighted Neymar’s role as the Ligue 1 club consigned Liverpool to a third away defeat in Group C, which has left them a hard team to back to progress with any reputable soccer predictions.

Six Liverpool players were booked and only two for PSG, although there was an argument midfielder Marco Verratti could have been sent off for an over-the-top challenge on Joe Gomez, and Klopp said it made his team look like aggressors.

“The number of interruptions in that game was just not cool,” Klopp said.

“Two times in a row we won the Fair Play award in England and tonight we look like butchers after the yellow cards we had.

“It was clever of PSG, especially Neymar, but a lot of other players went down like it was really something serious and we were not that calm any more.

“We were aggressive, and unfortunately negative aggression doesn’t help in football, we got rather frustrated and angry.

Asked if the referee could have handled it better Klopp added: “There are a lot of things you can do. You can give yellow cards for everything.

“If you go down, you act like you die and then the next moment you get up, yellow card. It’s possible. It’s unsportsmanlike behaviour.

“In the end, it’s hectic and everyone is going down. I don’t expect help from a ref, I just expect him to calm all these things down.

“The crowd was up, it’s really difficult and we were not calm enough. Even Joe Gomez got a yellow card. He’s the nicest boy on this planet and he was close to getting a red.”

PSG manager Thomas Tuchel disagreed, suggesting his compatriot was using it as a diversionary tactic.

“I did not feel it was such a big issue. We have five minutes overtime, we suffered a lot of fouls – you don’t have to do fouls,” he said.

“I don’t even want to talk about it because for me it is not a subject.

“When I lose big games I am angry and I talk about stuff just to bring attention away from the result.

“I am only talking about the game.”