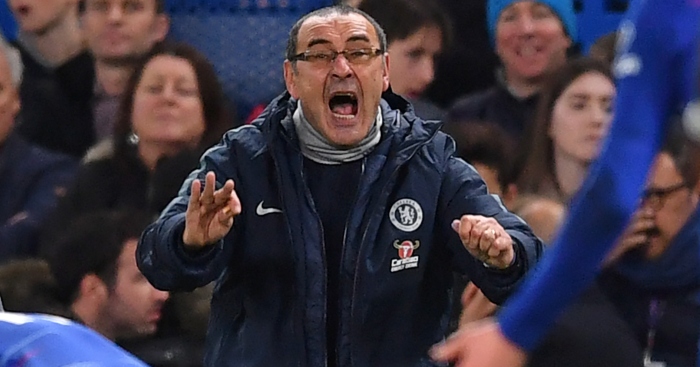 A seething Maurizio Sarri launched an extraordinary attack on his Chelsea players after Saturday’s limp 2-0 Premier League loss at Arsenal.

Chelsea’s only defeat in their prior 14 Premier League games against Arsenal was the 3-0 loss in September 2016 which saw Antonio Conte make dramatic changes, leading to a run of 13 successive wins and the 2016-17 title.

But goals from Alexandre Lacazette and Laurent Koscielny earned the Gunners a deserved win, which saw them move three points behind the fourth-placed Blues to enliven the race for Champions League qualification. Manchester United are sixth, behind Arsenal on goal difference.

You should read 16 Conclusions on a game that left Sarri furious, switching to his native Italian for his post-match media conference – “to send a message to my players and I want my message to be very clear,” he said – as the 60-year-old attacked their attitude and personalities.

Sarri said: “I have to say I’m extremely angry, very angry indeed. This defeat was due to our mentality, more than anything else.

“This is something I can’t accept. We had a similar issue in the league game at Tottenham (in November).

“This group of players are extremely difficult to motivate.”

Sarri has regularly criticised his players’ determination and motivation this season, but went a step further in analysing their flaws.

“It seems to me that, as a group of players, they’re not particularly aggressive from a mental point of view,” he added.

“They don’t have that ferocity in their mentality. That’s down to the type of players they are, their characteristics.

“It’s something that is difficult to change. It could take quite a long time.”

Change could come from a new player, or leadership, Sarri said.

He insists he has the appetite to make the change, but suggested the available personnel are the issue.

His former striker Gonzalo Higauin has been linked with a move to Chelsea, complicated by the fact he is already on loan at AC Milan from Juventus.

“I’m very aware of the fact this is never going to be a team well known for its battling and fighting qualities,” he added.

The former Napoli boss has steadfastly stuck to a 4-3-3 formation, but absolved himself of tactical blame, despite Jorginho’s continued struggles as a central playmaker and the blunt attacking display with Eden Hazard as a ‘false nine’.

“I think that we lost it because of our determination. But I couldn’t possibly say I am not responsible as well, in part at least, for the mental approach. That’s something we have to share.”

Sarri was uncompromising in his view when asked if the players should fear for their places.

He added: “It’s important my players have the attitude I’m asking them to have. If they don’t have that, then maybe they shouldn’t be playing at this level.”

If only it was a manager’s job to improve their attitude and mentality. Mind you, this is Chelsea…