Home Mediawatch Another day, another dose of Paul Pogba scaremongering 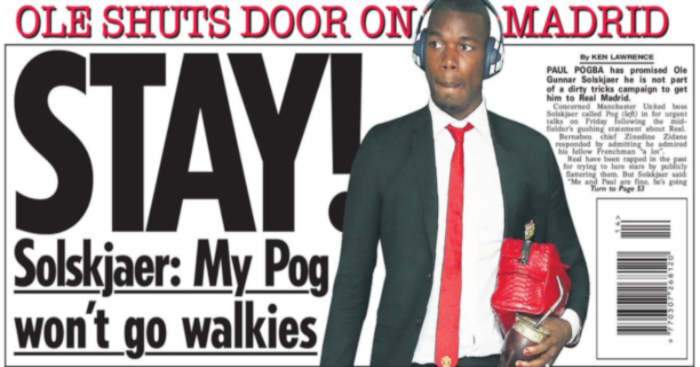 The Pog days are over
The Sun are no fools; they know a back page involving Paul Pogba and Manchester United will sell. They knew it when they blew some mundane and innocent quotes wildly out of proportion less than two weeks ago, and they certainly know it now.

‘STAY!’ reads their remarkably clever headline on Tuesday, with a sub-headline of ‘Solskjaer: My Pog won’t go walkies’. Because Pog rhymes with dog, you see. And everyone (no-one) calls the United midfielder ‘Pog’.

‘Paul Pogba has promised Ole Gunnar Solskjaer he is not part of a dirty tricks campaign to get him to Real Madrid,’ writes Ken Lawrence.

That’s precisely what someone who is part of a dirty tracks campaign to move to Real Madrid would say. You’ve been played like a fiddle, Ken.

Considering Pogba returned to United training after the international break on Thursday, the talks can’t really have been that ‘urgent’.

But Lawrence continues unabated. He says that the first thing Solskjaer set out to do as permanent United manager was to ‘sort out the situation with’ Pogba, who ‘was always too high maintenance for Jose Mourinho’.

Oh good, we’re back to this again. Those three months of Pogba just being a good player were fun; now he’s an arse to manage again.

‘But just 24 hours after his three-year deal was announced last Thursday, Solskjaer got his hands dirty. He demanded – and received – a commitment from the £89million midfielder after he had billed and cooed over Real Madrid and Zinedine Zidane while away on international duty.’

Solskjaer himself said the speculation “doesn’t really concern me”, that he and Pogba had a “chat” and “we’re fine”, that “there is no issue” and that “Paul is a very nice and polite man who’s just politely answered that general question”.

How on earth have you gone from that to Solskjaer ‘making it clear who is now in charge at the Theatre of Dreams’?

Unveil salad
The Sun have handily compiled a feature to go alongside their Pogba scaremongering. How else would anyone learn of the ‘6 tricks Real use to get their man’?

The first stage of their ‘dirty tricks campaign’ is ‘identifying target’. Which sounds an awful lot like ‘scouting’.

Then comes point number two, where they ‘line up legends’. Such as when Cristiano Ronaldo gave Marcus Rashford a shirt signed “Keep up the good work,” with ‘the suggestion being, “And why not come to do it here?”‘

After stages three (get in his ear), four (get the local press on board) and five (offensively low first bid) comes the final ‘trick’ that ‘Real use to get their man’.

What could it possibly be? Is it to literally throw money at them? To regale them about the club’s illustrious history? Or to get Sergio Ramos to prank call them incessantly until they relent and join?

No, apparently it’s ‘the unveiling’. At which point they’ve surely already ‘got their man’?

Shush, Telegraph
Mediawatch expects it from The Sun, but not the Daily Telegraph. And most certainly not Jason Burt, who says ‘we have seen this choreography before’. Of a player speaking in general terms about the appeal of joining the world’s biggest club, while also reiterating he is “happy” where he is? Sure.

But was Pogba not just being “a very nice and polite man”, as his own manager said?

‘Maybe so. But it sounded more like an unnecessary flirtation from Pogba – while on international duty, of course – and he will have fully known the reaction his comments would elicit. It is part of the power he holds and it is something that United could do with nipping in the bud.’

Considering you were covering England at Wembley at the time when Pogba made his comments at a France national team press conference, how do you know what it ‘sounded’ like? Is it possible you have only read the quotes and that they are therefore completely shorn of all context?

‘Pogba needs to back Solskjaer also.’

Paul Pogba, March 28: “It’s been very good. Results have been very good. We have a coach that value us, a really happy coach. He’s given confidence back to the players. He gives freedom to play football again. Maybe we lost that before.”

‘There have been flashes, moments in games, but precious little consistency…’

He has scored nine goals and assisted seven in 18 games since Solskjaer’s appointment. If only he had some ‘consistency’ to his game.

‘The word is that United are relaxed about the situation and that Solskjaer fully believes that Pogba is happy and settled at the club and has no intention of trying to force his way out.’

The club is ‘relaxed’. The manager is content. The player is ‘settled’ and not looking to leave. So remind us what all this fuss is about again?

Ryan Fraser to Arsenal for free in the summer?

How generous of Bournemouth to let Ryan Fraser go for free to a Premier League rival when his contract expires in 2020.

Arsenal now have as many points this season with seven games remaining as when they ended the 2017/18 campaign, and are as high as third for the first time since February 2017. That should keep you “happy” enough fella.

‘Wolves are the best West Midlands team since Martin O’Neill had three sixth-placed finishes with Aston Villa. But they leave me scratching my head.

‘They must stop throwing away points at lower teams in the league. Huddersfield have been relegated, but have 43 per cent of their points from Wolves, who have got results against Chelsea, Manchester City and United.

‘They can compete for a top-six place, only if they don’t lose against teams at the bottom.’

That’s fine. But do they still ‘have everything in their armoury to be able to win 85 to 90 per cent of home games’?

Sarri about that
To Dave Kidd, who describes Maurizio Sarri as ‘the anti-Solskjaer’ in The Sun: Chelsea are one point below Manchester United.

This story is currently top of The Sun website. They think it is the biggest piece of football news at lunchtime in the middle of a genuinely interesting Premier League midweek fixture list.

Recommended reading of the day
David Squires is just great.