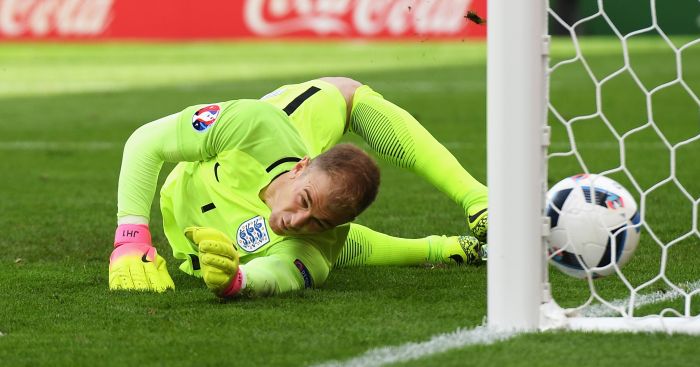 Peter Shilton says Joe Hart would be one of the first names on his team sheet but admits another mistake could cost him his place in England’s starting lineup.

Shilton, who won 125 caps for his country, thinks Hart needs to improve his concentration after letting Gareth Bale’s dipping free-kick fly past him in the 2-1 victory over Wales.

However, Shilton is backing Hart to bounce back after his disappointing performance against Chris Coleman’s side.

“I hope it will have no effect,” he told Sky Sports News HQ. “Joe’s a very experienced goalkeeper and he’d be the first to admit that it was a shot that he should have saved easily.

“Alright, it dipped a little bit, but he didn’t get across his goal quick enough.

“I am a member of the goalkeeper’s union and I know he also makes terrific saves, but I did think in that game, earlier on he dropped a routine cross and he didn’t seem to have his concentration right, but he’ll put that right for the next match.

“If Joe makes another bad error then Roy Hodgson would have to look at (dropping him). No player is assured of their place, but Joe is one of those you’d probably put first on the team sheet.”

Shilton is also backing Hodgson’s men to progress to at least the quarter-finals if the England boss can pick the correct attacking players.

“We need to improve,” he said. “We dominated both games but I don’t think Roy Hodgson picked the right team in the first match and in the first half against Wales.

“It was a forced substitution with Vardy and Sturridge coming on and it paid dividends, but he’s got to get a team that know what they’re doing, where they are going to get goals from.

“We’re a little bit off-the-cuff at the moment and we’re going to meet better competition as the tournament goes on. I’m hoping we’ll at least get to the quarter-finals and the semis would be a good effort. If we improve, who knows? The tournament is quite an open one.”