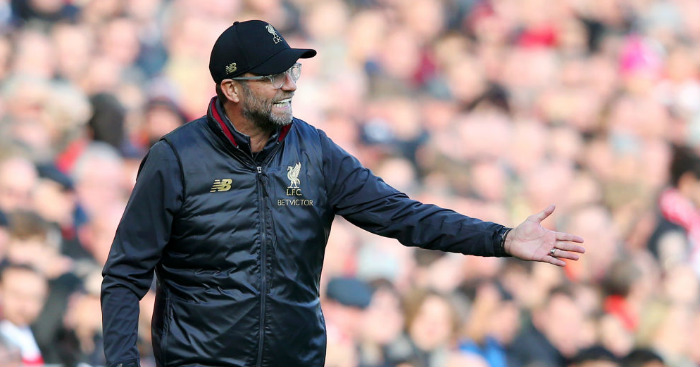 Liverpool needed a response to their unexpected midweek defeat to Red Star, and it came – not in the form of a thrilling, rambunctious, free-flowing battering of the Premier League’s bottom club, but with Jurgen Klopp’s continuing experimentation with a new formation.

Liverpool have played 4-3-3 for much of Jurgen Klopp’s tenure, a formation that has made them irresistibly devastating at their best, but erratic and unpredictable at their worst.

Signing Virgil Van Dijk and Alisson has largely helped ameliorate the negatives, despite a couple of hairy moments for the new goalkeeper, but Klopp is looking to shore things up yet further with a switch to a 4-2-3-1.

The 2-0 win over Fulham served as the German’s latest tactical laboratory, with Fabinho and Georginio Wijnaldum the double pivots behind Xherdan Shaqiri, Roberto Firmino and Sadio Mane, with Mohamed Salah up top in an out-an-out striker role.

There were plenty of occasions during a flat but comfortable win when you wondered whether it was really getting the most out of the Liverpool front four. With Firmino often pushing up alongside Salah, it left Mane and Shaqiri to drop deep to receive the ball, limiting Mane’s opportunities to race past a defender to receive through balls.

Meanwhile, as Salah showed with his impeccably-taken goal, he is at his best when cutting in from the right onto his favoured left foot. But his central striker berth meant he was forced to receive the ball on the left more often than he would ideally like.

But the trade-off Jurgen Klopp is banking on with the tactical switch is three-fold. It puts the skilful Roberto Firmino into a number 10 role to bridge the gap between midfield and attack that has so often been an issue for Liverpool this season; it allows Klopp to get Shaqiri into the attack without sacrificing any of last season’s front three to make room; and with two dedicated central midfielders, Liverpool’s shape in attack is much less likely to be caught on the break.

The lattermost of these points would have seemed most pressing for Liverpool last season (though ironically this shape actually means less pressing): they shipped three goals to Sevilla, Real Madrid, and Arsenal, four to Tottenham, and five to Manchester City, albeit all but Madrid coming in the first half of the season, before the addition of Van Dijk in January.

Yet despite those issues, Klopp has chosen to switch to the new 4-2-3-1 in just four games this season: at home to Cardiff, Southampton and now Fulham in the league, and in the 4-0 home win over Red Star, also at Anfield.

Respectfully, those fixtures do not especially stand out as games that require an extra degree of defensive solidity – particularly when you consider that the draws in the intervening games against Chelsea, Manchester City and Arsenal all came in the familiar 4-3-3, as did the 2-1 win away to Spurs and the 3-2 win over PSG that immediately preceding Klopp’s first dalliance with the new formation, the 3-0 win over Southampton.

It will be interesting to see whether Klopp continues this trend (open and attacking against the big sides, more structured against the Premier League’s strugglers), if this system is a way of conserving energy that waned badly at points towards the end of last season (think of the late-season draws against relegated duo West Brom and Stoke), or whether he intends to move into the 4-2-3-1 as his first-choice formation, and has simply used some of the easier games on Liverpool’s fixture list to test, hone and perfect the new system.

Such a routine victory over a badly-struggling side is not the greatest occasion to draw any meaningful conclusions about the new system’s efficacy, particularly when the first goal came while Fulham were still recovering from a curtailed celebration for a marginally-disallowed goal. But Klopp will be pleased that he has been able to give it a fourth airing – and build a little more familiarity – without it having cost him any points thus far. The unbeaten start continues.