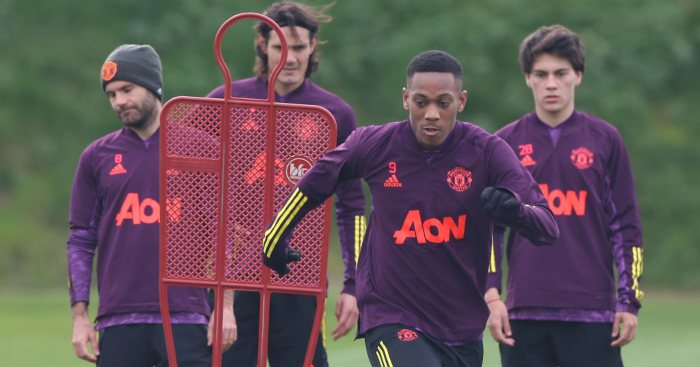 Man Utd forward Anthony Martial has welcomed the signing of Edinson Cavani as it will help the Red Devils “ensure that there is no drop-off in quality” throughout the season.

The Frenchman has started three of the Red Devils’ five Premier League matches to date but has failed to provide a goal or an assist.

That led to suggestions from Man Utd legend Paul Scholes that Martial’s good form at the back end of last season was “misleading”.

United brought in Cavani on a free transfer in the summer transfer window to provide competition for Martial and the 24-year-old is looking forward to having the Uruguayan on board.

“He’s a really great player, he’s proved exactly that all the way through his career, and I hope that he’ll manage to help us out,” Martial told Manchester United’s official website.

“It’s always a positive to have even more quality within the group and as there are always a lot of fixtures to play.

“When one player is rested, it will allow us to ensure that there is no drop-off in quality whatsoever. That’s especially important for the team.”

Speaking a couple of weeks ago, Scholes claimed that Martial had “almost conned” Man Utd fans following his positive end to the 2019/20 campaign, with Ole Gunnar Solskjaer still lacking a centre-forward.

“These forwards are exceptionally talented lads. We all know that,” Scholes told Stadium Astro.

“The problem with United’s forwards is that none of them is an actual centre-forward.

“Martial almost conned us into thinking he was one at the end of last season because he scored so many goals and was quite good.

“He’s started this season quite poorly again, which makes you think he isn’t. It’s misleading. That’s why I’ve kept saying we need a top-class No. 9.”