Anthony Martial has scored more goals than most at 24. But he needs to grin! 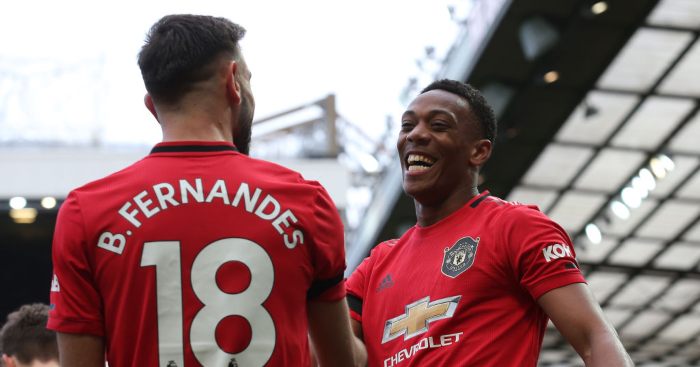 Shortest memory of the season
‘They are just unstoppable,’ writes John Cross in the Daily Mirror of a team beaten literally seven days ago.

Looking for Eric
‘Eric Bailly has been given the cold shoulder at Manchester United,’ is one of the oddest opening lines we have ever read. And it is made even more odd by its timing: exactly a week since Eric Bailly was magnificent as Manchester United beat Chelsea. Which makes it exactly a week since Ole Gunnar Solskjaer described him as “absolutely fantastic”, a “top player” and a “top, top defender”. That’s awfully warm for a cold shoulder.

John Cross (for it is he) continues in the Daily Mirror:

‘Bailly was axed from United’s starting line-up against Watford on Sunday – and given no explanation why he was dropped to the bench.’

Was he ‘axed’? Or did he play last week for the first time in ten months after a serious knee injury and then returned to the bench when Victor Lindelof was once again available after illness?

‘United defender Bailly would accept not playing after coming back from injury but the lack of communication is the biggest concern.’

Did he really need to hear that he is third-choice centre-half, has barely played all season, and Manchester United had both their first-choice centre-halves fit for the clash with Watford? Is he a child?

‘It has raised serious doubts about his long term future at Old Trafford with other big clubs certain to be watching developments closely.’

Yes. We imagine big red buttons have been flashing all across Europe after Bailly was on the bench against Watford.

‘Arsenal have been big admirers in the past, as well as their rivals Tottenham, and there is interest from Spain in Bailly whose current deal expires in 2022.’

And it’s at this point that we remember that we have been here before with Eric Bailly, John Cross and a blatant attempt to force Manchester United into playing the Ivorian, presumably at the request of ‘someone close to Bailly’.

It was in September 2018 when Cross last played this hand, writing:

‘Eric Bailly could be ready to quit Manchester United in January.

‘Bailly has been relegated to the substitutes’ bench which has put both Tottenham and Arsenal on red alert.

‘The North London clubs are watching developments closely and are keen on United’s Ivory Coast international.’

We have been watching developments closely too; Eric Bailly did not quit Manchester United that January. Nor this January.

Smiles better
From one misfit Manchester United man to another as Stan Collymore gives Anthony Martial a kicking in the Daily Mirror. Perfectly timed, of course, as he has scored in his last three games for United to take him within two strikes of his best ever season for the club.

‘He has a very good ability, but will he be an all-time great goalscorer? No.’

Well, he has only recently turned 24 and has already scored 86 goals – which is more than Thierry Henry at the same age – so it might be a little too soon to make that judgement.

‘Is he the natural 30-goal-a-season striker we hoped he might be? No again.’

Well, no. Certainly not yet. But 30-goal-a-season strikers are pretty rare; only two Premier League-based players hit that number in 2018/19: Sergio Aguero and Pierre-Emerick Aubameyang. So are you berating a 24-year-old man for being neither of those incredible, experienced players? Well yes.

‘He’s a 15-to-20-goal-a-season striker who will occasionally pop up with a lovely finish like he did at the weekend. But other times he will look surly, not in the mood and that can be massively frustrating.’

Ah. Now we get there. It’s the bloody smiling thing again.

Collymore then encourages Martial to take a leaf out of the book of Dwight Yorke, who always played with a great big grin. Which really is not patronising at all.

Obviously, the fact that miserable Martial has more than double the goals of the happy Yorke at the same age is immaterial; why let facts and statistics get in the way of a rant about an in-form goalscorer never quite scoring or smiling enough?

‘So Martial needs to learn from people like Dwight and know that, if he looked like he was enjoying it a bit more, it would be half the battle won.’

Yes, because being relatively surly was a massive obstacle to the career of, say, Eric Cantona.

‘I’d also be telling Marcus Rashford that, while they are the future of the club, I would be getting a 25-to-30-goal-a-season striker in to help them out.

‘You would then have a pool of three to guarantee you a Sergio Aguero-esque return week after week.’

Newsflash: They bought a 25-to-30-goal-a-season striker in Romelu Lukaku and then they sold him after two seasons. It’s almost like it’s not as easy as just buying more players who score goals.

Collymore then casually refers to this ‘deadly newcomer’ as if such players can be found and bought with ease.

If Martial’s 15 goals so far this season is an unacceptable number, we are assuming that a potential ‘deadly newcomer’ would already have 20 goals. The complete list of such players across Europe’s top five leagues reads as follows:

Why not buy two?

Roused by Wolves?
Stan Collymore is not done there, using the fact that Burnley are four points off the Champions League positions as ‘absolute proof that, beyond Liverpool, the Big Six have been disappointing’.

Indeed. Though it’s also ‘absolute proof’ that fifth could this season claim a Champions League place; they are seven points behind the traditional cut-off point of fourth.

‘Whether it be Sheffield United, Southampton or Burnley, none of these teams is going to win the Champions League or Europa League next season.’

He’s right, you know. Though Southampton are in 12th so it feels like something of a moot point.

‘And I don’t want to be a stick in the mud but when clubs of that size get into Europe they go out early and have a relegation battle because they don’t have the squad to deal with it.’

Now if only there were a recent example of a smaller club with a smaller squad getting into Europe, not going out early and not having a relegation battle…

Flying the nest
Within the first four paragraphs of Andrew Dillon’s Chelsea v Bayern Munich preview in The Sun, the Blues are referred to as an ’emerging team’, ‘football fledglings’, ‘Lampard’s rookies’ and ‘his boys’.

Reminder: This callow Chelsea side won the Europa League last season and lost only two members of that starting XI last summer.