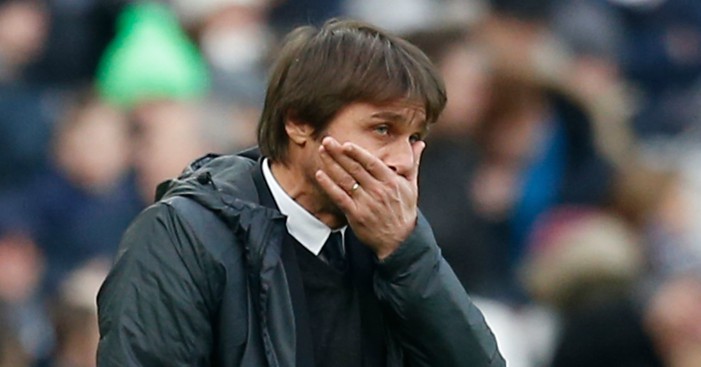 Will he stay or will he go now? Or will Antonio Conte sod off in the summer? Let’s see what everyone is reporting, shall we?

Also, read this. It’s rate good: Sacking Conte only half the battle for Chelsea

DAILY MIRROR: ‘Antonio Conte won’t walk out on Chelsea – despite the growing crisis at the club. Conte’s position looks in serious danger, but he has made it clear he will not quit, even though the pressure is mounting.’

John Cross adds that Chelsea ‘are still supportive of their under-fire manager’, and ‘have got no plans to sack him’. The fact that they are fourth, in the Champions League and still in the FA Cup is certainly working in his favour. Only elimination from both cup competitions and falling behind in the race for Champions League qualification ‘might prompt them to act’. Which sounds an awful lot like guesswork.

SPORT: ‘Luis Enrique is one step away from signing as coach of Chelsea. The set of Roman Abramovich can dismiss Antonio Conte, current coach, in the next few hours and the former Barça is located in the pole position to fill his vacancy,’ a ropy translation of the Spanish website tells us.

Conte has been left ‘in a very delicate position’ at Stamford Bridge, and Chelsea are ‘debating what to do’. They say the decision could be made within ‘a matter of hours’ – although this was at midday on Tuesday – and that former Barcelona manager Enrique would be Abramovich’s first choice. He could even take over before the first leg of the Champions League tie against his former club on February 20.

DAILY TELEGRAPH: Matt Law says ‘it may only be a matter of time until the Italian departs,’ but that Abramovich ‘will refuse to allow player power to decide the fate of’ Conte. With John Terry, Didier Drogba and an assorted number of other club legends gone, no player in the current squad has ‘a direct line’ to the owner.

‘It has long been predicted that Conte would leave Chelsea at the end of the season, but the heavy defeats to Bournemouth and Watford have increased the threat of a change before then,’ Law writes. ‘Chelsea insist that no discussions have taken place over sacking Conte and that they have not spoken to any potential successors.’

THE SUN: Andrew Dillon reports that Chelsea will sack Conte only ‘if the Blues plummet outside the top four’. Cheers, Andrew.

DAILY MAIL: While everyone else plays it safe and suggests Conte will stay unless something major happens in terms of the club’s form, Sami Mokbel and Matt Barlow are not toeing the party line. They say the Italian was ‘hanging on to his job’ on Tuesday evening, and ‘there is major dressing-room tension’.

They write that Conte ‘is refusing to walk away’, but ‘has privately acknowledged he will not be Chelsea manager next season’. The Blues, for their part, ‘know Conte’s departure is inevitable’.

But the most interesting information comes from the reported views of the players.

‘Some find Conte’s training regime repetitive and monotonous. Similarly, players have blamed the tension at the club’s Cobham HQ on Conte’s ‘bad moods’.

‘Conte, it is understood, launched into a furious dressing-room rant after last week’s home defeat by Bournemouth – perhaps understandable given they had just lost 3-0 at home.

‘Players have privately complained of fatigue, blaming the manager’s intense training schedule. The fact the squad have suffered a number of muscular injuries this season indicates they are being overworked.’

The story is on the Mail’s back page, under the headline of ‘CONTE BORES US’. Sheesh.