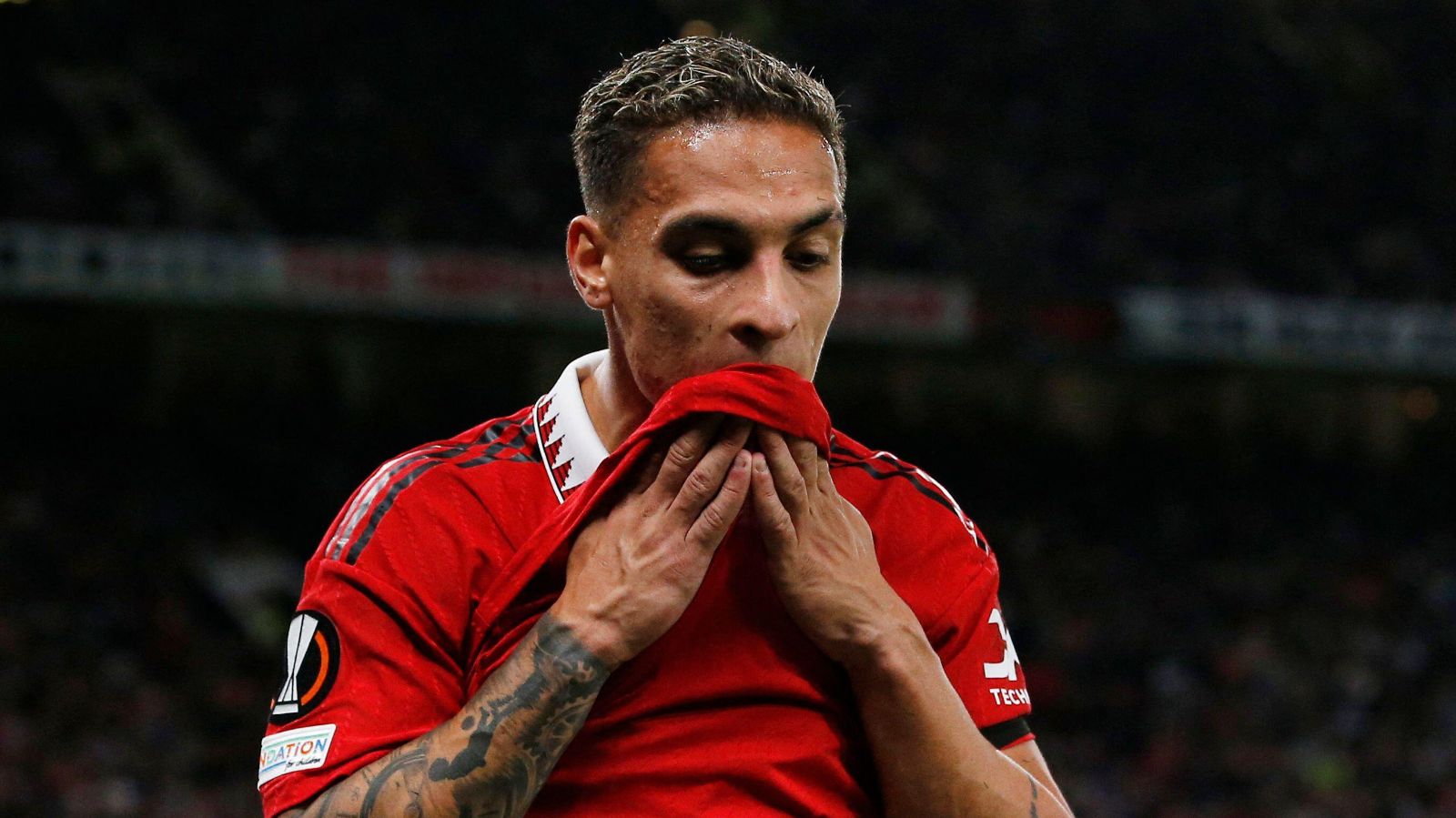 The verdict from the people is that Antony has the right to entertain and the old men need to shush.

Now watch some football and send some views to theeditor@football365.com

Backing Antony
That escalated quickly, footballer entertained audience and all the pundits lost their shit.

I am reminded of a quote from dodge ball from Patches O’Houlihan: Necessary? Is it necessary for me to drink my own urine? No, but I do it anyways because it’s sterile and I like the taste.

Was it necessary for Antony to spin 720 with the ball? No, but it was entertaining and I definitely enjoyed it. It showed that he may just not crumble under the pressure of playing for United as so many signings before have.

Maybe I am getting older and cranky but football could do with some mavericks/characters. Too many players are coached to the point where they cannot play without the ‘system’. Football could do with more unnecessary, more off the cuff skill, more entertainment. Kids across the world in school and over the weekend will be trying to replicate Antony and I love the idea of that, that’s what football is about.
Paul (MUFC) Dublin

…On Thursday night Antony did an unusual and skilful football trick.

With a packed deep lying defence in front of him and no immediate runners he looked to draw attention to himself and bring defenders toward him, making space for others to make runs.

He then slightly overhit a difficult pass to one of those runners taking advantage of the defense being distracted to break in behind clear on goal.

It didn’t work but the concept was good.

It was stylish and individual, the crowd loved it, the defence were taken by surprise and it almost paid off.

So of course the GB News rent-a-gobs of Savage and Scholes were outraged, and will now look to jump on and crush Antony every single time he attempts to create or show flair outside of the rigid dull straight lines they think in.

It’s a crushingly dull and predictable mirror of the country as a whole.

Also, could someone please take Ian Darke to whatever retirement farm John Motson was led to? He’s just.. gone, its clear he isn’t actually doing any prep work any longer and is just relying on “everyone knows” shtick. Cristiano Ronaldo is not a particularly good free kick taker, Ian. He never has been.
Tim Sutton (Mitro 9 – 3 Nunez)

So, the governing body are forever refining micro details in the rules (side bar, you do have to wonder what geniuses they have working on this stuff, and why), and the introduction of VAR was supposed to help. But the underlying issue is that they are designing failure. VAR is about helping to make sure the right decisions are made, but as with this ‘Kane’s toenail’, it would be virtually impossible for an assistant to make that call from 50 yards. Would be pretty tough from 20 yards in the moment. That’s a problem.

The rules should be based around what it is reasonable for a trained human to judge, with VAR there to help make sure the right calls are made in big moments; on and off the ball fouls / incidents, goals, penalties etc. But it should always be based around rules that humans can reasonably call. The moment it becomes relied on as the only way to make that call, the soul of the sport is gone.

On this basis, as one commenter suggested, let’s go back to daylight between attacker and defender for offsides. It favours the attacker, which is always good as goals = fun, and it’s not that hard to judge so no more time lags while fussy decisions only a computer can make suck fun from the moment.
Badwolf

Tottenham offside VAR
There was something about the perspective that I couldn’t quite figure out. It was only when I looked closely I noticed that the lines have been drawn incorrectly. Specifically the one from the ball. Where it touches the ball seems correct but where it touched the ground is behind Emerson yet the ball is clearly in front of him ( he’s heading it). Shorten the green dotted line to stop in front of Emerson and it will be in front of the red line. Onside.
VAR line drawers mistake.
John, Toronto

His name is Rio…
I just want to be clear here – the main point of my Rio mail from the other day was to call out bad punditry for its lack of actual analysis (and very secondarily United and only to further drive home the main point) and had basically nothing to do with trying to cry over Partey not getting credit from Rio (which he did praise him in the interview btw so def wasn’t about that). But of course since everything has to boil down to “my club vs. yours” the actual main point of it was missed.

Also, thanks for mentioning Keown who I HATE (wasn’t good enough to go around criticizing the club all over the place seriously, sir, be quiet) to help prove my point. Rio and him are of the same ilk as pundits actually – when they’re not being biased you might actually learn a thing or two from them.

Aside from talking about terrible punditry – which is really just going back to a not so uncommon theme discussed in the mailbox (there’s even a whole section basically dedicated to it on this website?) so I thought it was something quite “chill” to talk about – I apologize for sending an innocent stray totally founded in reason towards Manchester United, a club I hate dearly.

From now on when criticizing clubs in the mailbox I promise to only engage in mere banter and over the top tribalism such as the individuals who responded to my mail. Not surprised to see them set themselves up as fools by telling me to calm down while going on diatribes completely missing the point and/or just not making sense.

Yes, going to WhoScored rating which is merely an algorithm and not real analysis all while knowing you wouldn’t even be able to explain how the algo works anyway (love it when amateurish analysts/fans use these tools as if they’re doing something profound)…instead of doing the actual analysis I’d decided to call out Rio for not doing since it’s his well-remunerated job all while criticizing me and simultaneously implying I’m being over the top is really what this mailbox is all about.

Furthermore, I feel like because I’m clearly from Los Angeles, certain people in the mailbox feel the need to attempt to over-explain (no history of this dynamic in English football to speak of) how the sport works while not explaining anything I don’t understand (at best) or anything at all (at worst). Talking about how Casemiro and Varane have given United great improvement (seriously, how many combined minutes have they played so far for the club) given fees paid plus salary committed is hilarious at this early stage.

Also, Martinelli has proven himself in this league already over 3+ years now but sure let’s say Antony already is as great of a signing as well. Tite is taking the latter to Brazil because he likes him more for his team (entitled to his opinion) and a better player and comparable signing to Martinelli this does not make Antony. All of this could well pan out but at the same time could very well not (Sancho/Maguire/Ronaldo/AWB/Fred/Pogba…I mean seriously) and in 2 years I can totally see these same people complaining about the Casemiro contract after he starts to look a bit old like Kante is now.

Lastly, I noticed a good attempt at humor except Arsenal are able to spend big sums – literally look at how much more we’ve been spending post-Wenger (not a coincidence) as it is comparable to United’s but just done significantly more wisely. F365 has even published material on this but I take it that’s not necessarily why you come to this website. So, again, how is any of this commentary supposed to help Manchester United?
MAW, LA Gooner (Could get way more into it if someone wants to bait but these emails are already pretty long – Partey’s performances have been at least of slightly better quality than Casemiro’s while playing most of his minutes in the tougher competition unlike Casemiro. Also, his team is top of the league.)

Big Weekend oversight
You seem to have missed the biggest game in world football this weekend!

Enough of the European minnows and premier league poseurs; for the first time in years, it’s Peterborough vs Cambridge.

I can expect a 2000 word write up Monday then?
Dan