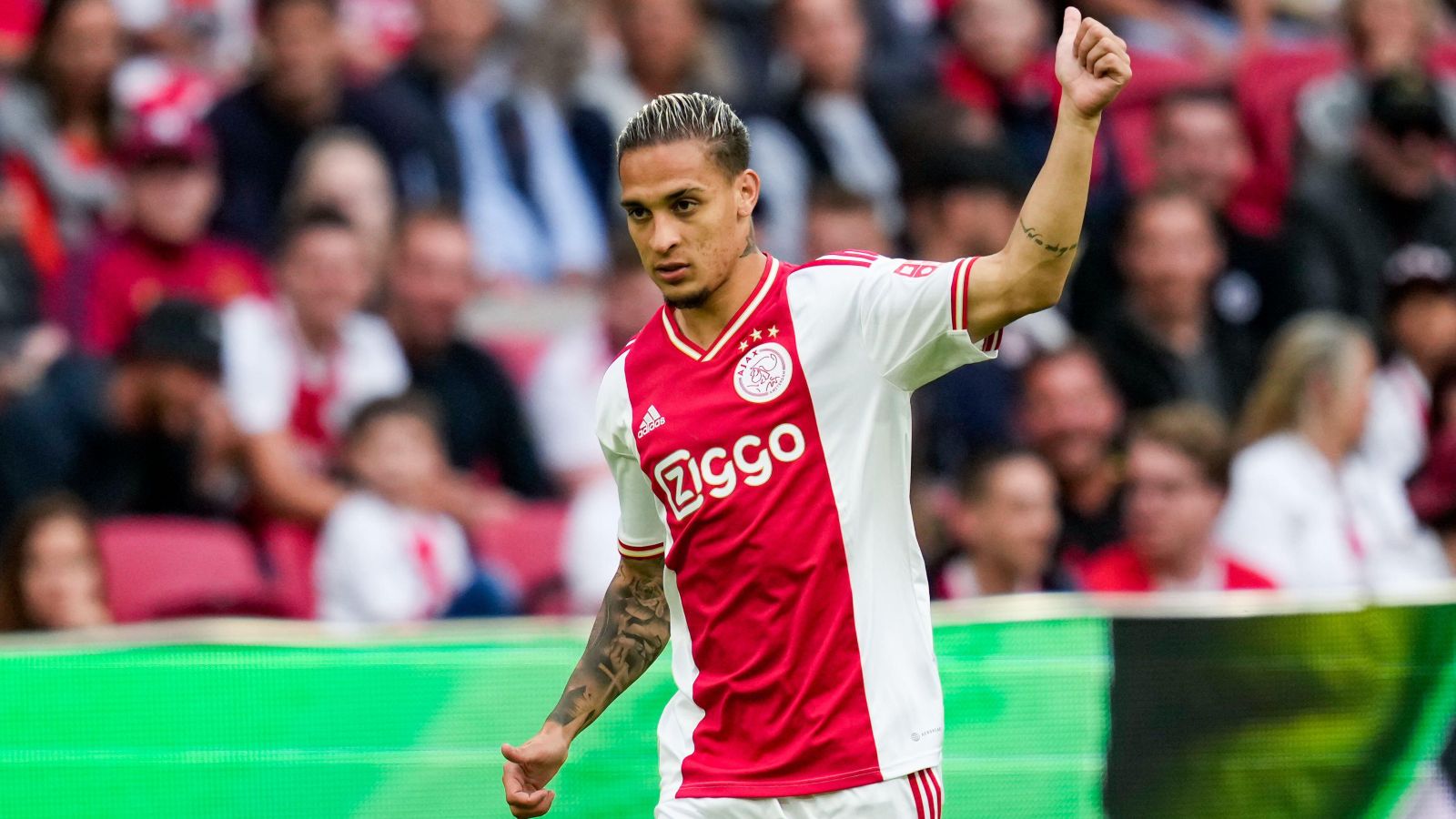 Has anybody seen Antony play enough to know if he is any good? And why aren’t Liverpool spending what they need?

Please tell me Antony is worth the money
£80m plus add-ons for Anthony just feels wrong. I can’t say I have even seen the guy play much to warrant my feelings.

So I spent some time today watching YouTube videos and now I just feel like £80m plus add-ons is just damn right irresponsible. On top of the EFFING £80m PLUS ADD-ONS, it seems he plays his best on the right-side, which is Sancho’s favourite side of the pitch.

I’m all for backing the manager but surely there are better options. I hear that Cody Gakpo kid is quite something as well. Taller, stronger, quick with his feet, plays on the left-side of the pitch and importantly a solid £35-£40m cheaper.

I would greatly appreciate it if someone that watches the Eredivisie could provide some insights. What is the chance that this gent lives up to even 50% of that fee?

See what happens when Man Utd play footballers…
Now that Monday has come and gone, and the match is won by United, it is time for a cold hard look at the changes that EVT has instigated. It seems to boil down to one key factor. Put footballers on the team.

I know this is a fresh and challenging strategy for United, but with Martinez and the new kid Malacia the plan seemed to work. Add in Elanga and you have players who actually like getting a go, having a ball to kick and who knew where to go to get it. Like we all did as kids.

And the best move of the match was not either of the goals, it was Martinez moving into the goal line to stop the ball from going in, it was a brilliant piece of defending.
Tim McKane

United v Liverpool is Arsenal v Man City in the cup
As the dust settles on United’s deserved victory on Monday night, I’m struck by a parallel with another ‘team in transition’ similarly upsetting the odds in recent times – Arsenal beating City in the 2020 FA Cup Semi-Final. They also defended doggedly, also won with 30% possession and had apparently proved their doubters wrong with a performance of energy and organisation when it mattered, ready to establish themselves back in the big time after that statement win. They then won 4 of their next 14 league games.
Shappo

Why the Bruno fuss?
Am I the only one totally mystified by the calls for Bruno to have received a second yellow?

First things first, Bruno is a right snidey c**t. He dives, he moans, he feigns injury. He’s the dictionary definition of a player you love if he’s playing for you and hate if he’s playing against you. I fully appreciate all that.

However, I don’t get the furore around the incident in question. If you grab a goal back late in the game, then by all means try and grab the ball from the back of the net, tuck it under your and sprint back to the halfway line; it might save 10 seconds or so. If one of the opposition get that ball first? Tough sh*t. It’s their kick off, they’re in possession, just get back into position.

The only reason there was any kind of incident there was that Salah was trying to grab the ball from Fernandes, the captain of the opposition no less. If it were a United free kick, corner, throw, goal kick etc., everyone would think that behaviour was a total nonsense. It’s their ball. They’re not wasting time by denying you possession. Why is it any different because it’s a kick off? Ironically, by trying to get the ball off him, Salah probably ended up costing his side time.
Lewis, Busby Way

Where is the money Liverpool fans?
While we enjoy seeing many (but not all) Liverpool fans licking their wounds and bitterly sniping in the mailbox and comments, it seems appropriate to re-ask a previous question.

Where is the money, Liverpool fans? We know you love a net spend conversation, at least while you’re winning, but now the chat is turning to the need for midfield recruits (what ever happened to good clubs do their business early?) to replacing the aging and crocked (surely that was known before the season?) the question must be asked about transfer budget.

Klopp’s record is around £64m per year net (£318 over his time). Arsenal and Chelsea have all spent more, even Everton have. Along with United and City of course.

Surely, but surely, a club with the world wide following of Liverpool, with a ground the size of Anfield filled every week, and with all the commercial work that any good owner will be doing to build income, MUST have a huge amount of spending power.

So, you want Bellingham? Go get him. Spend what you need. £100m? No problem. Need someone else? Go get him! Why keep digging through the bargain bins, the lower leagues or the second tier leagues for players? Yes, you’ve signed good quality in places, Fabio Carvalho looks a great player. But needs must sometimes.

Now is the time for some questions to be asked of your amazing owners and manager as to where the money is going, because if it’s not going into the squad, where is it going?
Badwolf (I promise we won’t call it panic buying or suggest it lacks planning)

Time to move Trent?
Since it’s well known he reads this mail page and often takes suggestions from fans I’m gonna send this one out to klipperty Klopp.

We have injury woes. In midfield. We do have a pretty excellent DM in Fabinho. No need for changes there. We do have a good creative midfielder in thiago, but he seems to be made out of gelatine. We have a jack of all trades (Hendo) but he’s old now and will need replacing very soon.

We do lack a long term creative player. Someone who doesn’t mind firing long laser guided passes from deep and has the legs to get about a bit. Someone who loves an assist or two. Someone with a massive range of passing…someone like Trent Alexander Arnold.

Let’s be honest his skill set is not a right back or even a right wing back. His skillset is that of a deep lying playmaker like Andrea Pirlo rather than a right back. So why not move him to midfield. Let Ramsay have game time and then we can stop relying on Milner, great though he was he cannot be a first team starter anymore.
Lee

Is Joelinton the best Premier League midfielder?
Ok, that’s a bit tongue in cheek. But in response to Josh’s mail about big 6 midfields (which felt very blind to the existence of Bentancur and Bissouma), it’s striking how many great midfielders there are now knocking about at the so-called other 14.

As a Newcastle fan, the transformation of our big number 7 is something I don’t think anyone saw coming, but the man is now a one-man pressing machine who wins the ball back, harries people and breaks lines with his running. He’s basically the perfect PL midfielder. For the first 70 mins against Man City he set the whole tone of the game, until we got pinned in a bit by an excellent side.

I see (although less closely as don’t watch as much) that Alex Iwobi has undergone the same transformation as Joelinton this season, so maybe there’s a new trend of physically-blessed, misfiring attackers dropping into deeper roles? Maybe this is Pep’s long-term plan with Haaland after all, Klopp will solve his midfield shortage with Nunez and where Lukaku will end up after his loan at Inter.
James, NUFC

Go on the Gers
Just wanted to give Rangers my team a mention.

Europe League finalists season and now back in the Champions League after a 12-year absence.

Not bad for a team that was down and out in Scotland’s league 2 a decade ago but remains the world’s most successful domestic team!

Bring on the draw !
Neil , Glasgow

Sportswashing machine
Shz comes to the fore with another sh*t take, this time about Ian King’s article concerning Oil Classico.

Shz, if you can’t understand why football supporters would feel a little distaste at watching the blatant sportswashing of pariah states being played out on prime time UK Sunday afternoon TV then I’d suggest that you’re not a sports fan. Crack on and watch LIV, the Saudi Grand Prix, the money grabbing boxing bouts and wash it down with some good old fashioned beheadings of teenaged dissidents.
James Outram, Wirral