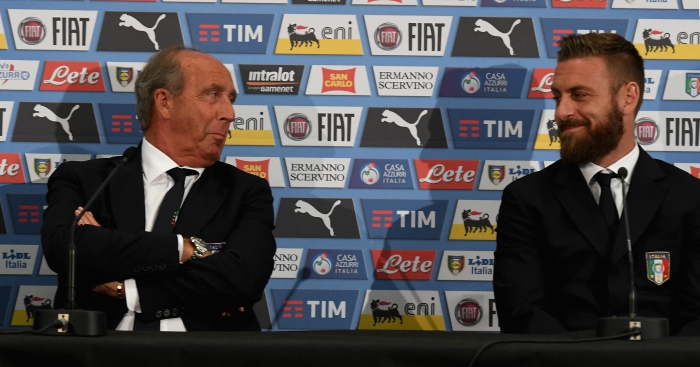 Italy have sacked coach Gian Piero Ventura following their failure to qualify for the 2018 World Cup.

The Italian Football Federation announced in a statement on Wednesday night that the 69-year-old’s 16-month reign was over.

Italy lost their play-off for a place in Russia next summer 1-0 on aggregate to Sweden, the first time since 1958 the Azzurri have failed to qualify for a World Cup.

Daniele De Rossi gave the manager a lecture on substitutions during the game, so let’s just cut out the middle man and appoint the now-retired midfielder.

The Federazione Italiana Giuoco Calcio said the decision to dismiss Ventura was taken at a meeting called by FIGC president Carlo Tavecchio.

The move was widely expected following Italy’s goalless draw with the Sweden in Milan on Monday.

Ventura, who had been under contract until 2020, declined to resign in the immediate aftermath of the match, but the FIGC has now taken the decision out of his hands.

He labelled the outcome of the play-off a “terrible result” and apologised to the Italian supporters.

Ventura, a journeyman coach who had most recently spent five years in charge of Torino, took over from Antonio Conte as national team boss following their penalty shoot-out defeat to Germany in the quarter-finals of Euro 2016.

He had to get the better of Spain to secure automatic qualification for the World Cup, though, a task which proved too tough as Italy finished the group five points behind their rivals.

But it is the two games against Sweden, a side ranked 10 places below Italy, which have cost him his job.

The FIGC made no mention of possible successors to Ventura.

Carlo Ancelotti, out of work since being sacked by Bayern Munich earlier this season, is the favourite for the role, although it remains to be seen whether he would be willing to swap club football for an international job.

Chelsea boss Conte, Roberto Mancini, currently in charge of Zenit St Petersburg, and Juventus coach Massimiliano Allegri are the other leading names reportedly in the frame.