Home F365 Features Aquilani for Alonso and other massive downgrades 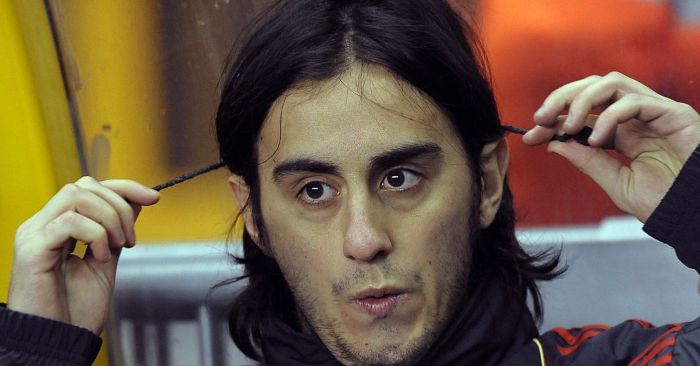 The biggest downgrade list has to begin with Alberto Aquilani. It would never happen now…

Liverpool: Alberto Aquilani for Xabi Alonso (2012)
“It was just a complete and utter mess,” says Jamie Carragher. “It was a panic signing. Xabi was going and there was that sense of, ‘We have to get someone in’. But we signed someone who hadn’t played for months and was months away from being fit again.”

Out went one of the greatest central midfielders of the early 21st century – disgruntled after Rafa Benitez had tried to bring in Gareth Barry the previous summer – and in came a patently unfit Alberto Aquilani for over £17m. Last year he revealed that he never wanted to leave Roma – “It was hard. I had to go to England, to a cold place” – and it showed. Even when fit, he was painfully off the pace. Liverpool eventually had to give him away for pennies; oh for a Michael Edwards back in 2012.

Alberto Aquilani not much of a replacement for Xabi Alonso. The banner at Anfield read: “A hero will rise.” Safe to say he didn’t.

Manchester United: Mark Bosnich for Peter Schmeichel (1999)
“I was just so tired, I was mentally tired,” said Peter Schmeichel when explaining his decision to quit Manchester United after the 1999 Treble. But he did admit that it was perhaps a “rash decision” and said that Sir Alex Ferguson did not make quite enough effort to persuade him to stay.

Ferguson had his reasons; he was eyeing a free transfer move for Mark Bosnich from Aston Villa. It did not go well. Bosnich was one of three pretty terrible United goalkeepers that season and the following year he was himself replaced by Fabien Barthez. Ferguson later described Bosnich – who developed a cocaine addiction – as a “terrible professional”.

Chelsea: Alvaro Morata for Diego Costa (2017)
Ah, 2017, that interminable summer of Morata v Lukaku with Chelsea and Manchester United fans taking the side of whichever striker was being lined up for a transfer that week. In the end, Morata went to Chelsea for a club-record £60m after Antonio Conte’s text message to the divisive Diego Costa informing him that he was surplus to Blues’ requirements despite scoring 20 Premier League goals in a title triumph.

So out went one of the great modern (and truly nasty) Premier League strikers – though he would not officially leave until the following January – and in came a pussy-cat who scored 16 goals in 47 top-flight appearances. It was never a good fit.

“It wasn’t a good time in my football life, I’d stopped enjoying it. At times I didn’t believe in myself. I was playing some games in England and I had the feeling that when I got into space, my teammates looked at me and I knew they thought I wouldn’t do anything good with the ball. It was driving me crazy,” said Morata last year.

Chelsea’s 2017/2018 season ended the moment they replaced Matic and Costa with Bakayoko and Morata.

Arsenal: Eduardo for Thierry Henry (2007)
‘Arsenal have moved quickly to replace Thierry Henry by signing Brazilian-born Croatia international Eduardo da Silva from Dinamo Zagreb for a disputed fee. Arsenal say they have paid £7.5-8 million for the 24-year-old, while Dinamo claim the fee is £16.25 million, the amount for which Henry was sold to Barcelona,’ reads the Daily Telegraph from the summer of 2007 after Arsenal had sold possibly the greatest footballer to ever grace the Premier League and replaced him with a striker who had never played outside Croatia.

After scoring 34 goals in 32 league games for Dinamo Zagreb the season before, Eduardo stuttered to just four in 17 – with the first of those four goals coming in December – for Arsenal before a horrific leg break which guarantees he will never be judged too harshly by Arsenal fans. They should instead save their judgement for the club, who had already failed to adequately replace Patrick Vieira at the start of a downward spiral that now sees them in mid-table.

Tottenham Hotspur: Roman Pavlyuchenko for Robbie Keane/Dimitar Berbatov (2008)
“I just told him to tell Pavlyuchenko to fucking run around a bit. The boy himself just kept nodding his head. He might be thinking inside: ‘What’s this tosser saying to me?'” is the Harry Redknapp quote that has become synonymous with the Russian that actually arrived at Spurs for £14m and with some fan-fare after 69 goals in 141 league games for Spartak Moscow.

The problem? He was replacing two players who had both scored 15 Premier League goals in the previous season. The other problem? Redknapp was never going to consistently play him ahead of Jermain Defoe and Keane (who both returned in early 2009). History has forgotten that the Russian actually outscored Keane, Defoe and Peter Crouch in the 2010/11 campaign. Whatever he did, he was no Berbatov. But then who is?

Manchester City: Nobody for Georgi Kinkladze (1998)
They didn’t even try. Quite right too.