Home F365 Features Are Athletic Club slipping towards the unthinkable? 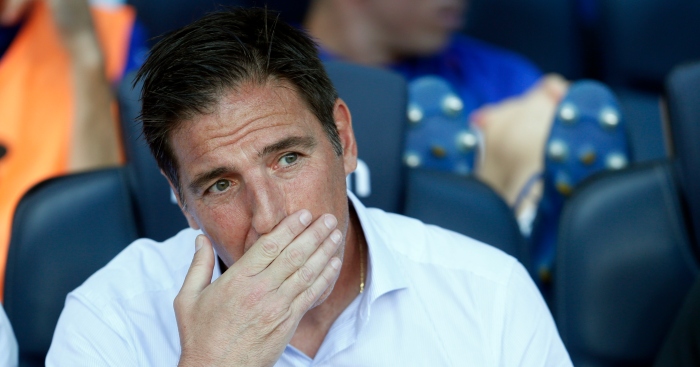 ‘Athletic Club has decided to terminate the contract that united its coach Eduardo Berizzo with the entity.’ That was the bizarrely-worded message from Athletic’s English-language Twitter account on Tuesday morning, which blurred the lines between poor translation and pure poetry.

The phrasing may have been slightly odd, but the news it conveyed was not at all. The sword had been hanging over Berizzo for a while, and Monday night’s 3-0 defeat to Levante at the Estadi Ciutat de València made it inevitable that it would fall.

Berizzo’s words after the game said it all: “If I am to be sacked, so be it. If there’s a better person who can correct the situation, then great.” Hardly the words of a man with a great deal of confidence in his job security.

The Argentinian was considered an ideal fit to take over this talented group of players after Cuco Ziganda’s departure at the end of last season. Under Ziganda, Athletic laboured to a 16th-place finish, and his unadventurous playing style was unpopular with the fans.

Berizzo was seen as the perfect antidote. He had showcased his attacking prowess in his spells as manager of Celta de Vigo and Sevilla, and with the likes of Iñaki Williams and Iker Muniain at his disposal, it was hoped he could mastermind a revival of sorts in Bilbao.

It was not to be. The defeat against Levante stretched Athletic’s winless run to 13 La Liga games, with the 2-1 home win over Leganés on opening day remaining their sole league victory this season.

While nobody expected miracles from Berizzo, this terrible run of form that left his side languishing in the relegation zone was equally unexpected, and could no longer be tolerated by a club of such history and standing.

As one of three sides never to have been relegated from Spain’s top flight, along with Real Madrid and Barcelona, a drop down to the Segunda División would not only make unwanted history, but would potentially cause a crisis for the club’s unique structure.

The Basque-only policy for their playing staff is both well-known and well-respected in the game, and is a source of great pride for the club. While most Athletic fans would rather be relegated than abandon their unique doctrine, it is certain that relegation would make it harder to keep hold of their better players, and harder to replace them.

They have a famously excellent academy, but in the second tier there is every chance that their most talented young players would be picked off by higher-ranking clubs.

The Athletic board will be keenly aware of the dangers of relegation, and the change of manager now is clearly intended to arrest the slide before it becomes irreversible.

So who have the board entrusted with this role? As is so often the case in Spain, it’s the B-team manager who has made the step up, although this one does at least have experience of top-flight management.

Not that the experience was altogether happy. Gaizka Garitano took tiny Eibar to the top flight for the first time in their history, for which he deserves immense credit, but resigned after they finished in the bottom three in their inaugural La Liga season. They were later reinstated thanks to Elche’s expulsion from the league, but Garitano’s resignation stood.

After a brief and unsuccessful spell in charge of Real Valladolid in the Segunda, he took over at Deportivo de La Coruña, but was sacked after winning just five of his 27 games in charge.

His past experiences suggest he is not exactly the safest pair of hands, but the Athletic board will be hoping a local, homegrown manager who already knows the players will be able to galvanise the team.

There are reasons to be positive; although they are in the bottom three, the league is so open this season that they are only two or three wins away from mid-table, and with plenty of time left to turn their fortunes around.

Despite spending big money on the signings of Íñigo Martínez and Yuri Berchiche this year, they recouped a great deal more from the sales of Kepa Arrizabalaga and Aymeric Laporte, meaning there should be some money to spend in January. Their self-imposed transfer restrictions will limit their options somewhat, but a January move to bring Ander Herrera back to the club from Manchester United has been mooted.

It was a bold decision to sack Berizzo at this stage of the season, but it is surely the correct one. Athletic are sliding and are showing no signs of stopping. It was an equally bold decision to appoint local boy Garitano, and only time will tell if it was the right move. He has an awful lot of work to do to turn the ship around and prevent this proud, historic club from slipping towards the unthinkable.