Home Mediawatch Are Everton ‘idiots’ about to appoint another ‘foreign’?! 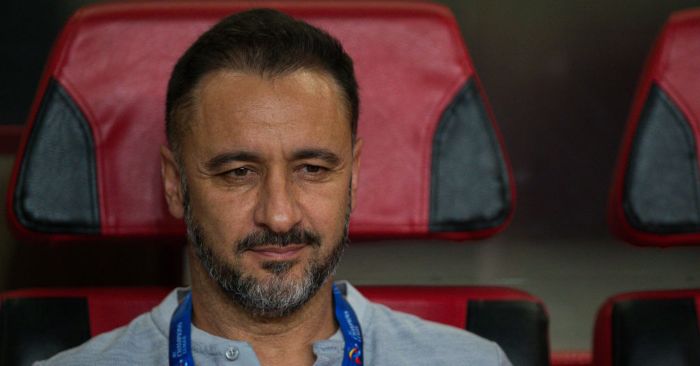 Buck Rodgers
‘Brendan Rodgers is set to end speculation he could leave for Arsenal – by signing a new Leicester contract’ – The Sun.

From the main perpetrators of said speculation, that ‘set to’ seems doubtful.

‘For weeks Silva’s tactics had been questioned among the players, who also wanted clarity over his future but did not get it.

‘Not from Moshiri – and certainly not from Silva, who insisted to the last that he was determined to hang on to the three-year contract that was worth a total of £12m.’

BREAKING: Man ‘determined’ to keep well-paid, high-profile job instead of being made unemployed.

To the Vitor, the spoilers
The topic of Everton and their next manager has provided some heated debate over at talkSPORT. Here is but a taste:

What do you make of Everton going for Pereira? 🤔 pic.twitter.com/CSo57ERZVW

A glorious dismissal of basic research, there.

It is a talking point that host Alan Brazil continued to revisit over four hours of his morning breakfast show. Dominic King of the Daily Mail, Bianca Westwood of Sky Sports and Harry Redknapp all make guest appearances, along with the wonderful Ally McCoist.

But the strongest start is made by Brazil himself:

“Moyesy I think will get it. Some Everton fans have come on already saying ‘no, no, no, we’re not going back’. Get lost you idiots. Look where you are now. Look at the table. Look what Davey done for you. I’m not having it. Get in there, Davey.”

When the idea of Vitor Pereira, former Porto, Olympiakos, Fenerbahce and 1860 Munich manager, winner of league titles in three different countries and, perhaps pertinently, a candidate interviewed by Everton to replace Moyes in summer 2013, is mooted, Brazil is predictably dismissive.

What follows is a good ten or 20 seconds of Brazil and McCoist talking over each other in an unintelligible cacophony of Scottish noise. Then Brazil makes himself heard.

“The sky” literally being Sky Sports, who first named him as one of the favourites. But what do they know?

McCoist unfortunately gets roped into the tirade, adding:

“Obviously it’s very topical, it seems the thing, we’re talking about another Portuguese coach. What’s wrong with a young English coach or even a young British coach?”

The “or even a young British coach” is a glorious and unnecessary concession. You’re still basically saying ‘give the job to Sean Dyche or Eddie Howe’ either way.

It is at this point where the conversation descends into farce. Brazil asks Redknapp:

“Harry, Harry, first of all, who is this Vitor Pereira?”

“No idea. Listen, he’s foreign, you’ve gotta give…bring him in. You know, keep bringing them into our…give ’em the jobs.

That is hilariously and dangerously close to both “keep bringing them into our country” and “dey terk er jerbs”. Who knew Redknapp was such a big South Park fan?

Top, top, top – and not at all damaging – invective.

“All them other lads that go and get their coaching badges, work in the Championship, know what they’re doing. It’s not rocket science.”

“Brucey’s gone back in, he went to Newcastle, ‘oh, we want a sexier man’, Newcas…what a job he’s doing.”

It is at this stage where he’s just saying literally everything that comes into his head without any sense of filter.

“Chrissy Wilder – OK, they got done last night but what a job he’s done there. Eddie Howe…”

At which point there is an actual pause, presumably because he sensed that he was talking about a manager two points above Everton and in the midst of a four-game run of consecutive defeats.

After then pitching McCoist for the job – perhaps unironically, but we really don’t know at this point – Brazil steams in once more.

“I don’t know who this guy is. I swear…look, he might turn into another Jose, I don’t know. But Pereira, I’ve never heard of him.”

And if a 60-year-old Scottish man who seems to pride himself on a lack of European football knowledge has “never heard” of someone, why would those “idiots” at Everton appoint a man with 15 years of coaching experience in six different countries?

‘They were booed off at half-time, supporters left in their thousands before the final whistle and they have given up on their club and even one of their all-time great players.’

Because he seems to – at least currently – be a bit sh*t at this management lark. It’s hard not to give up on a man whose first two results are a draw with Norwich and a home defeat to Southampton.

“Bournemouth are good going forward but shaky at the back” – November 22.

“[Bournemouth] are trying to be more solid defensively, but that is hampering them going forward” – December 6.

Breakout
‘Pochettino’s complicated severance package from Spurs means it would be better to wait until the summer. But it is also believed that he wants a break after a stressful five-and-a-half years with Tottenham’ – John Cross, Daily Mirror, December 6.

“My best decision was to come to Argentina to switch off for 10 days. But I expect to return to Europe to make decisions on my future. At my age I don’t need a lot of time to recover. I am open to listen to projects put before me” – Mauricio Pochettino, December 3.

Is Mediawatch alone in wondering why Ashley Young’s wives and girlfriends drove him to training?

Warning of the day
‘Ben Foster has warned that Watford’s next manager must find a way to stop the “rot” that has taken hold at the club’ – Daily Mirror.

Well at least now will be fully aware that the team bottom of the table, six points adrift of safety, needs drastic change.