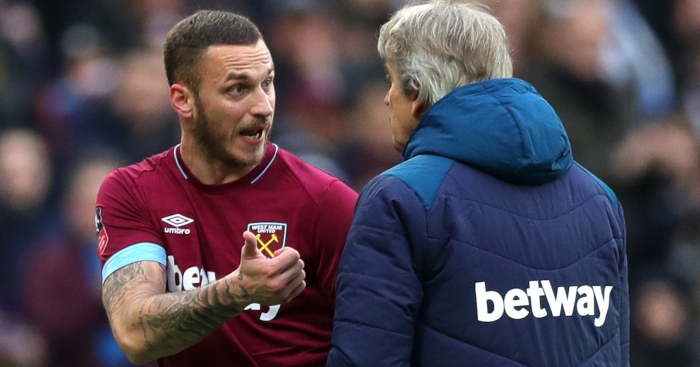 West Ham have insisted Marko Arnautovic is not for sale after his agent claimed the Austrian forward wants to move to China.

A Chinese Super League club, believed to be champions Shanghai SiPG, are understood to have launched a £35million swoop for Arnautovic, the Hammers’ top scorer.

The club will attempt to lure Arnautovic, who turns 30 in April, with wages understood to be £200,000 a week over a four-year contract.

Arnautovic’s brother Danijel, who also acts as his representative, revealed that the player wants to leave and urged West Ham to sell.

“West Ham bought Marko for peanuts,” he told talkSPORT. “They paid £20million for him, which is nothing in the current market.

“They bought him to keep them in the Premier League last season and he did that. He took every award at the club; best player, signing of the season and the players’ award.

“Now West Ham have a fantastic offer. It is close to double what they paid for him.

“He wants to go to a new market and challenge for titles. This is what he wants.

“It is his great desire that West Ham accept the offer from China.

“He knows the West Ham fans love him and he has a special connection with them, but things move on, this is the world of sport and he hopes they can understand.

“Until he is no longer a West Ham player, he will give everything to the club. He hopes the fans can respect his wishes.”

But a Hammers spokesperson said: “Marko has a contract and we fully expect him to honour it. He is not for sale.”

Manager Manuel Pellegrini had earlier said he was determined to keep Arnautovic, who has scored eight goals this season, including three in his last two matches.

Pellegrini, who substituted Arnautovic against his will after only 20 minutes in Saturday’s FA Cup win over Birmingham, had earlier shrugged off the speculation.

“Those are all rumours,” Pellegrini said. “We know that we have a very good player in Marko, a lot of clubs may want him to play for them.

“I don’t want to talk about things that might happen. Marko in this moment is a player of our team. Players of his quality and other players like Declan Rice, Felipe Anderson, other clubs will want them, but that is one thing. I don’t think they will go.

“I want to keep him, of course, but you never know what might happen in the future.”