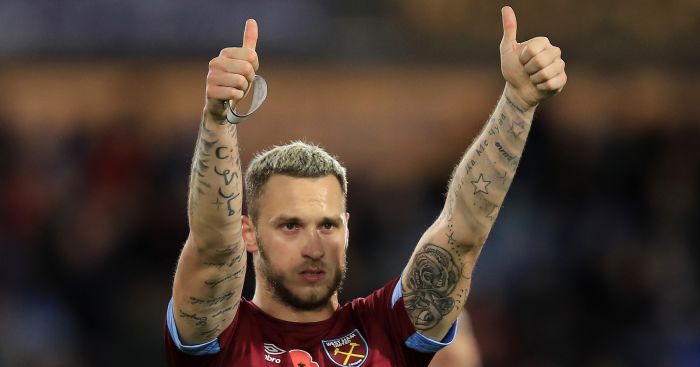 Marcel Sabitzer has no doubt that Marko Arnautovic could be a key man for Manchester United and wished the striker luck in pursuit of the transfer.

West Ham striker Arnautovic was linked with a move to United in May with Sky Sports claiming that United wanted Arnautovic, but the Hammers had no desire to sell and valued him at £50million.

The Austria international then said it was a “great honour” as Jose Mourinho came and watched him in national team action at the end of May, although the United boss reportedly claimed he was just on holiday in the area at the time.

Arnautovic, who is currently on the sidelines with a hamstring injury, has done little to quell the speculation since and RB Leipzig’s Sabitzer, an Austria team-mate of Arnautovic, thinks the former Stoke man would have no trouble fitting in at Old Trafford.

“Marko is a great guy,” Sabitzer told Omnisport. “I get along well with him and we have played together for a long time with the national team. We are good friends and once went on holiday together. I like him a lot and I think he feels the same way about me.

“Everybody can see that he has athletic qualities. He had a lack of maturity and luck in Germany and I think he knows that. But his performances in England the past few years have demonstrated his real class and I can see the same in terms of the national team.

“That’s why I believe that he can make another step forward and play a major role there [at Manchester United]. I cross my fingers for him.”

In June when asked about the talk Arnautovic said: “Whatever happens will happen. I’ve never heard anything.”

While last month the 29-year-old, who is under contract until 2022, declined to comment on his future.

“I don’t want to talk about it. I am concentrated on West Ham,” Arnautovic told Sky Sports.