Home Competitions Euro 2016 Arrogant? Who cares? Ronaldo is a genius 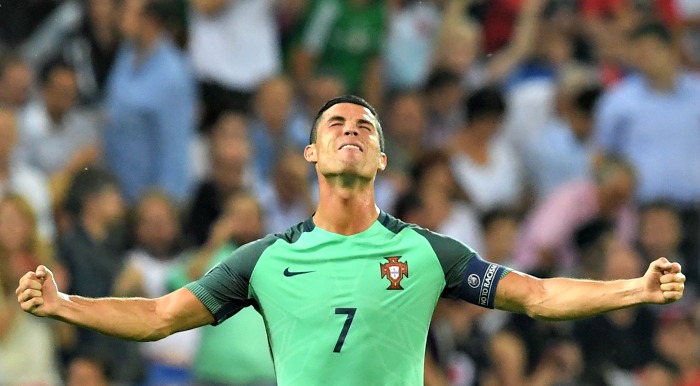 If you wanted a moment to sum up Cristiano Ronaldo’s towering self-regard, the thing that seems to fuel him like the Ultimate Warrior going to the ropes of a wrestling ring, it came after the goal that set Portugal on their way to the 2-0 win over Wales in the Euro 2016 semi-final.

Ronaldo wheeled away to celebrate, but was mobbed by his teammates as they exploded with joy at this majestic moment. Eventually though, he broke free from the group and celebrated in the manner he really wanted, with that rather silly jump, tense, pose, shout thing that he does. He even glanced up at the big screen to make sure he looked just so.

But if there’s anyone in world football that justifies this arrogance it’s him. The most remarkable athlete you’ll ever see play the game – possibly the greatest European of all time? Puskas and Eusebio and Zidane might have something to say about that, but he’s certainly the most exhilarating and viscerally brilliant footballer of this generation.

And also, who cares? Ronaldo’s genius is partly a product of his character, his platinum self-belief part of what makes him one of the greats. That sulk he puts on whenever he misses a chance, the look that says the world is somehow conspiring against him and that there simply must be some sort of schism in the cosmos because it couldn’t possibly be his fault that he put that shot wide, is a form of denial that maintains his mentality. It’s not even so much that he thinks he’s great, rather the thought he might not be doesn’t occur to him.

That stat floating around before the game that he’d taken 36 shots while only scoring two goals in this tournament (it’s now 45 and three, by the by) wasn’t really notable for the sheer number of efforts, more that he kept trying in the face of all available evidence. Most people, if they were successful at something only around five per cent of the time, would stop trying: Ronaldo’s complete lack of self-doubt means he just keeps going, going, going.

Real, difference-making, world-class, epochal players do things that nobody else on the planet can do. Who’s better at those headers, like the one that was past Wayne Hennessey before he knew what had taken place, than Ronaldo? The ones where he winds up from about ten yards back, charges and nuts the thing harder than 90% of professional footballers can kick it. You can see what’s about to happen from eons away, but like an articulated lorry careening towards your window, there’s absolutely nothing you can do about it. When his force of will is combined with that cartoonish physique, only a literal wall could stop him, and even then you’d check on the bricks afterwards. As absurd as it seems to compare the two players, but perhaps Andy Carroll is in the same heading league? Maybe you can put Gareth Bale, who scored the same number of headers as him last season, up there too. The difference, in this game at least, was that Bale can do these things, but Ronaldo actually did them.

We apply the word genius usually only for tricks and skills, a pass perhaps, things that are regarded as more cerebral. But in sport, what is genius other than being otherworldly good at something, better than absolutely everyone else? Ronaldo’s headers are a ridiculous feat of skill as well as physicality, so why shouldn’t they be regarded alongside Messi’s control or Iniesta’s passing?

In time, people will probably look at Portugal’s record in the last few years and wonder why we didn’t talk about them more. This will be their second European Championship final in the last four attempts; their fifth major tournament semi-final since 2005; in two of the tournaments they didn’t reach the last four they were beaten by Germany and Spain. But between tournaments they often look like shambles of various shades, there is the perception that they only have one player to speak of, and they do love a pointless row sometimes.

Still, while it would have been utterly extraordinary for Wales to have been in the Euro 2016 final, it’s almost as remarkable that Portugal are there. This, as has been repeated many times, was the first game they won inside 90 minutes; they were largely desperate in the group stage, reduced to a collective pout and tantrum by Iceland, frustrated by Austria, pegged back by Hungary, finishing third. Equally they haven’t convinced in the knockouts, and have been one of the least exciting teams to watch.

But there they are. Nobody will expect them to win the final, whoever they play, but then again nobody expected them to be in the final. Of course this isn’t a one-man team, and we can talk plenty about the contributions of Renato Sanches or Jose Fonte or Nani, but let’s not kid ourselves that we’ll remember who the rest of this team were in 30 years. There would be a curious sense of completion if Ronaldo wins on Sunday, and who’d wish against that?