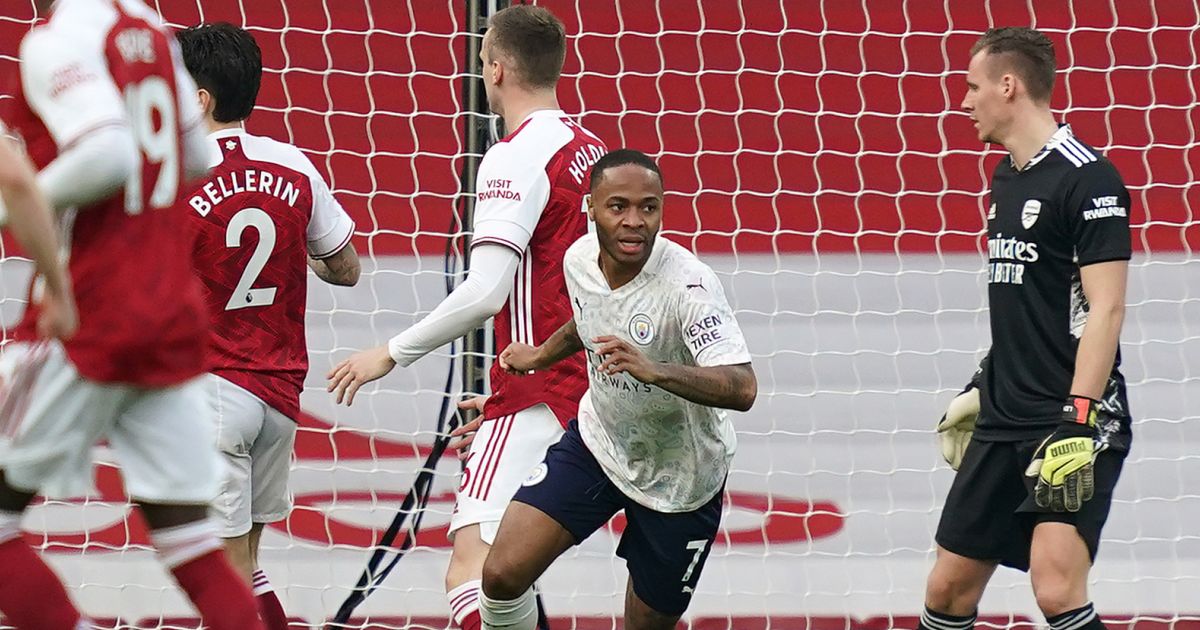 1) First the formalities. That’s the league title sorted, if it wasn’t already. It really is an absurd achievement from City, who as recently as mid-December looked like having a genuinely bad season and were limp and ineffective enough for one hotheaded fool to rule them out of title contention. It was a rash and premature assessment brought about in part by a desperate need to drag a 16th conclusion out of a rotten Manchester derby, but it wasn’t completely ridiculous at that stage to look at City and think there was no way they or Guardiola were going to put this right. They’d won just five of their first 11 Premier League games of the season and just made pretty much no effort to make that six against a then pretty ropey Manchester United. City then promptly dropped two more points at home against West Brom.

Then they just won all their games and went 10 points clear. Fair enough, it’s a good strategy. Have we learned anything about the danger of premature proclamations? Marge, my friend, I haven’t learned a thing. What happens between second and 10th is still anyone’s guess, but first place is sorted. Definitely this time. Almost definitely. They definitely won’t win the Quadruple, though. You can take that to the bank. Ahem.

2) So to the game itself. That was… all a bit weird, wasn’t it? Vague sense of unrealness to the whole affair. And the more we look at ‘unrealness’ there the more we realise that’s also not a real word, but that only makes it doubly apt so we’re leaving it in. We’re far enough into behind closed doors football now that the inherent eerie oddness of it no longer gives pause, but this still felt like the most behind-closed-doors game of all the very many behind-closed-doors games. City’s low-key domination from the very first second combined with the absence of atmosphere gave the whole thing the air of a training game. Both teams would deny it, but it almost felt like a 1-0 City win was a result everyone could live with so let’s all just get it over with and conserve some energy for the great many battles still to come.

3) There’s a caveat coming, but Arsenal will be kicking themselves over the goal that ultimately proved to be the matchwinner. That it came so early, that it came after Arsenal had been given and failed to heed a warning about Sterling arriving on the end of a Riyad Mahrez cross, that it involved five-foot-seven Raheem Sterling climbing highest in the penalty area. It was a bad goal to concede in so, so many ways and doing it against Manchester City of all teams is particularly careless. It’s a bad team to start a team against while still half-asleep. Now the caveat. It didn’t actually matter. If City had needed to play in third rather than second gear for more than 90 seconds, they’d have done it. If they’d needed a goal in the last 88 and a half minutes, they’d have got it. Arsenal were not what mattered in this match. Maybe Jurgen Klopp had a point.

4) The apparent inexorable inevitability of the result and Arsenal’s mere nominal role in deciding its outcome shouldn’t be read entirely as criticism. It also shouldn’t be seen as patronising to say they are just not as good as Manchester City and this sort of thing has been happening to all sorts of sides coming up against City in recent months. Arsenal did at least ride out the initial storm after that disastrous early goal, and there should be praise especially for Kieran Tierney, who had a torrid opening five minutes which seemed to consist entirely of Kevin De Bruyne pinging the ball over his head for the run of Riyad Mahrez, but who later emerged as Arsenal’s likeliest route to unlikely profit in those brief minutes before half-time when City’s quiet control of proceedings felt ever so slightly uncertain.

5) Sterling had a third clear chance of the game shortly afterwards after Kevin De Bruyne – playing slightly from memory on a low-key yet still occasionally eye-catching return from injury – played him in. Sterling, as he still sometimes does when presented with a clear chance, first overcomplicated it and then hesitated to allow Arsenal to regroup. That’s of only secondary importance, though: City were already 1-0 up by this point and the match thus effectively over as a meaningful contest. The problem is that, inevitably, Sterling’s miss led to much talk of how he “could’ve had a hat-trick”. We’ve lost the war on this one, but this just doesn’t work as a concept. Just say it’s his third good chance of the game. If he’d scored the first one, the other two chances don’t happen. Maybe some other good chances happen instead, maybe they don’t. Maybe Arsenal would even have won had the first chance gone in! (They wouldn’t.) It’s not the biggest issue, but we’re launching our campaign now. Keep Retrofitting Actual Events On To A Hypothetical Alternative Timeline Out Of Football. The name needs work.

6) Ruben Dias, take a bow. What a player. That City are able to so confidently hold teams at arm’s length and win these games by the odd goal now is due in no small part to the continued, consistent excellence of Dias. He’s been a huge factor in this City’s side’s turnaround, and it’s worth noting. City do not have an unblemished record when it comes to big-money centre-backs and they needed a replacement for Vincent Kompany not just as a player but as a leader. They’ve found him. And he’s a proper ‘City player’ too, as a a match-leading 86 passes and a completion rate of 94.2% showed. These sorts of games would feel far less serene were it not for the quiet brilliance of City’s new defensive lynchpin.

7.) And John Stones. Gareth Southgate owes Pep Guardiola and Dias a huge debt of gratitude. Just quietly, effortlessly faultless from Stones. Again. Even if you still thought he was going to come good at City – which already puts you in a pretty small minority – you cannot surely have imagined he’d be quite this good every game all the time for months on end? Can you? Liar.

8) While we’re going through the City defence, shout out to Joao Cancelo for his single-handed determination to inject some jeopardy and joy into proceedings with a rollercoaster of a performance. It’s not that he was bad, because he wasn’t, it’s just that he was – let’s say eccentric. And in this City side at the moment, that stands out. Had a fairly iffy 10 minutes at the end of the first half when Tierney started gambolling forward and swinging in crosses, but put that behind him quickly enough. Saved his real show-stealer for the second half and a ludicrous high looper of a back-pass to Ederson that took an age to reach the City keeper and, just for maximum lols and jeopardy, was also probably on target (which is more than any Arsenal attempt in the second half). Even an arch-distributor such as Ederson didn’t know quite what to make of it, and promptly sliced it straight into the path of Mo Elneny. We’d have all had a good old chuckle had he scored, until City scored three goals in the next 10 minutes out of sheer frustration at being roused from their slumbers by their banter-loving right-back.

9) Cancelo being Cancelo, a player for whom the description ‘right-back’ appears woefully mundane and inadequate had some other belting moments in the second half. Another interaction with Ederson lacked the obvious slapstick appeal of the backpass, but even in this peak Team Without Strikers, the sight of the right-back running in hot pursuit of a long goalkeeper clearance and being a good 20 yards clear of his nearest team-mate is quite disorientating. He also nearly scored an absurd goal with the outside of his right boot in an entirely separate incident. It was all good, enjoyable stuff and frankly any player who gives us two conclusions from a game like this is a hero we don’t deserve.

10) The Compulsory Kevin De Bruyne Bit. A fairly low-key return from injury. Very good in the first 15 minutes when City were at their most invested and alert. Did he fade from the game because City let it drift a bit, or did City let it drift a bit because he faded? Whichever, he got a good hour in and did a couple of nice things – including setting up the third of Sterling’s early triptych of chances – and City can be happy enough with that as the four-pronged trophy assault approaches the endgame. He’ll surely improve for the run.

11) We should probably say something more about Arsenal. It’s just quite hard to form an actual concrete opinion about them. For better or worse – and surely entirely unfairly, but it’s the impression one gets – they appear to be a side that football matches happen to. They don’t ever seem to dictate the terms. There is definitely a really good team in there somewhere, and a really good manager in Mikel Arteta, but they remain tantalisingly out of reach and still for the most part hypothetical. Even when they flew into a 4-0 lead against Leeds last week it seemed to be more a product of the chaos Marcelo Bielsa’s side bring to bear on every game than anything Arsenal did. Again: not fair, but it’s how it looks. Then, having got into a commanding lead without appearing quite sure how and why, they then didn’t really know best how to go about defending it. I dunno. They’re hard to pin down at the moment. They’re neither obviously bad nor obviously good, yet saying they’re an average side doesn’t feel quite right either even though the league table makes a pretty compelling case.

12) And what to make of Pierre-Emerick Aubameyang? Off-field events provide plenty of mitigation, but this was another disappointingly anonymous and flat performance in what is theoretically at least a big game. After the fun and games of the hat-trick against Leeds it was reasonable enough to expect a bit more than this. No shots, no key passes, no dribbles, five bad controls and just 19 touches of the ball – the same number Gabriel Jesus managed in an entirely unremarkable 28-minute substitute appearance.

Stop saying "Croydon De Bruyne", it sounds like a drug from Brass Eye

14) A genuinely significant milestone as Rob Holding and David Luiz become the potential answers to a staggeringly bad pub quiz question as the first player replaced and brought on under the concussion substitute rule. Ridiculous that it’s taken until 2021 for that to become a thing (concussion subs, not bad pub quizzes) but slow progress is better than no progress.

15) Is the Quadruple genuinely on the cards? It feels like City in with a legitimate shot at the most absurd of things pretty much every other season, but this should really be the toughest year of all in which to pull it off. And yet here we are, still in February and City are halfway there. There are still formalities and boxes to tick in the league and Carabao Cup but no more than a bit of housekeeping. There is the very real prospect of being able to rotate to prioritise key matches, and an energy-saving bloodless victory like this in a game where Kyle Walker, Sergio Aguero, Aymeric Laporte, Rodri, Ferran Torres and Phil Foden never even had to set foot on the pitch does make you wonder. Most of the European heavyweights are undergoing some crisis or other, while City just look utterly serene. This is definitely their best chance of achieving the impossible. Until the next one.

16) And let’s end on a positive note for Arsenal as well: the next time they play a team in white shirts and navy shorts it should be a lot more fun.