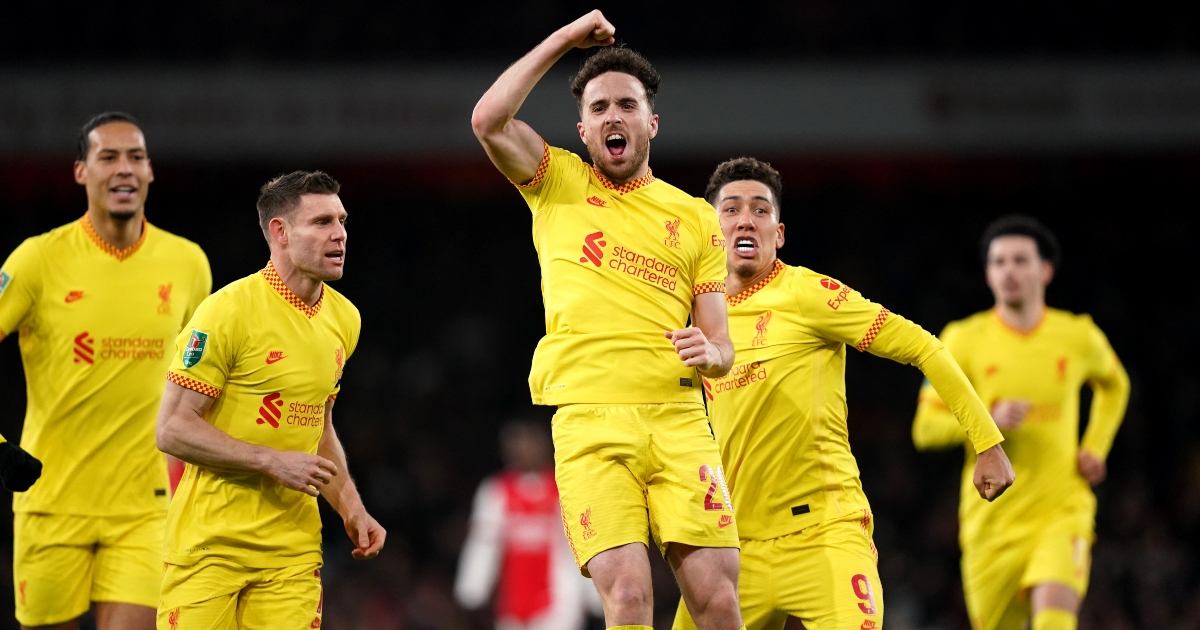 A Diogo Jota brace sealed Liverpool’s place in the final of the Carabao Cup after the Reds beat Arsenal 2-0 on aggregate.

After a goalless first leg at Anfield last week, Jota’s first-half daisycutter caught Aaron Ramsdale flat-footed and he then saw a second-half VAR check rule he was onside following a smart finish as Liverpool won 2-0 at the Emirates Stadium.

It means Jurgen Klopp’s Reds head to Wembley, where they will face Chelsea on February 27.

This leg should have initially been the first of the tie but was postponed after a number of positive coronavirus cases at Liverpool, while Arsenal had successfully appealed for Sunday’s north London derby at Tottenham to be called off.

This game had been in doubt but went ahead as planned, with Arsenal able to welcome back a number of players who would have been unavailable at Spurs.

The hosts started brightly, Alexandre Lacazette hitting the crossbar with a free-kick inside the opening five minutes.

Liverpool thought they had broken the deadlock in the tie as Joel Matip poked home a Fabinho header across goal but his effort was ruled out for offside.

Jota, though, would continue his fine recent scoring record against the Gunners, getting the better of the returning Takehiro Tomiyasu and somehow beating Ramsdale with a scuffed effort.

Another goal for Jota & another assist for the best right back in the world! #ARSLIV

After their lively start, Arsenal’s attacking talent was stifled as Liverpool took control of the game heading into half-time.

Lacazette passed up a great chance to level after the restart, firing over the bar after besting the Liverpool offside trap to latch onto a fine pass from Albert Sambi Lokonga.

Liverpool, too, saw an opportunity to double their lead pass them by as youngster Kaide Gordon showed a lack of composure in skying a cross from Jota when well-placed.

Ibrahima Konate, on for Matip at the interval, headed against the post from a corner as the pressure on Ramsdale’s goal intensified.

Jota’s second 13 minutes from the end killed off the dying embers of any Arsenal comeback, the Portugal forward once again benefitting from a Trent Alexander-Arnold pass before coolly finishing.

The goal was ruled out by the flag of the assistant referee, only for VAR to overrule the decision and award the goal.

Partey was then dismissed after picking up two bookings in quick succession, the Ghana midfielder having only landed back in London at lunchtime, and he will now miss the visit of Premier League bottom side Burnley on Sunday.

But it was Jota’s fifth in his last five appearances against Arsenal and went unanswered as Liverpool booked their place at Wembley, aiming to win the competition for a record ninth time.