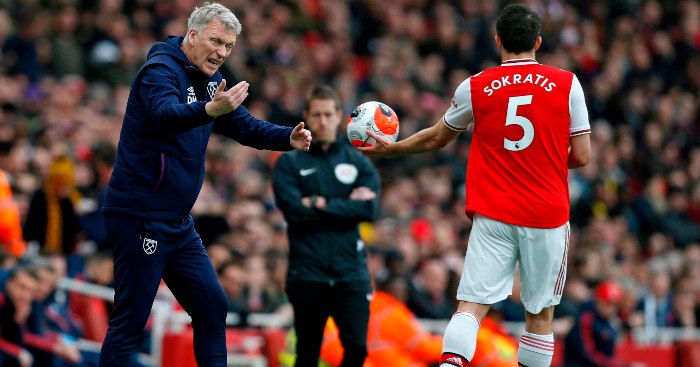 David Moyes has told his West Ham players not to become a ‘hard luck story’.

The Hammers deserved more from a 1-0 defeat to Arsenal, with the visitors missing a number of great chances to score before Alexandre Lacazette’s winner was eventually allowed to stand after a lengthy VAR check.

West Ham have now lost their last six away from home – their longest winless run on the road since 2006 – but Moyes has warned his players not to feel sorry for themselves.

He told the BBC: “We have done really well but the result was not good. The opportunities were there to win and we didn’t take them.

“I felt before the game that we could score here. Our players were showing in their form that they could score, so I am disappointed. I have told my players that they played very well; I couldn’t fault them. But what we need is to show our quality at the right time to make a difference.

“I don’t want us to be a hard luck story. I told my players I think they played well but let’s get rid of that tag. We can’t let that happen again. We have got to be more ruthless. At this stage, I would rather we had not played well and won.”

On the VAR decision, Moyes said: “We have got done by a goal from VAR. Maybe next year that goal won’t count.

“But we have got one of the best referees in Europe and two excellent linesmen officiating this game. I would have trusted their decision. I don’t think they needed to go to someone else.”