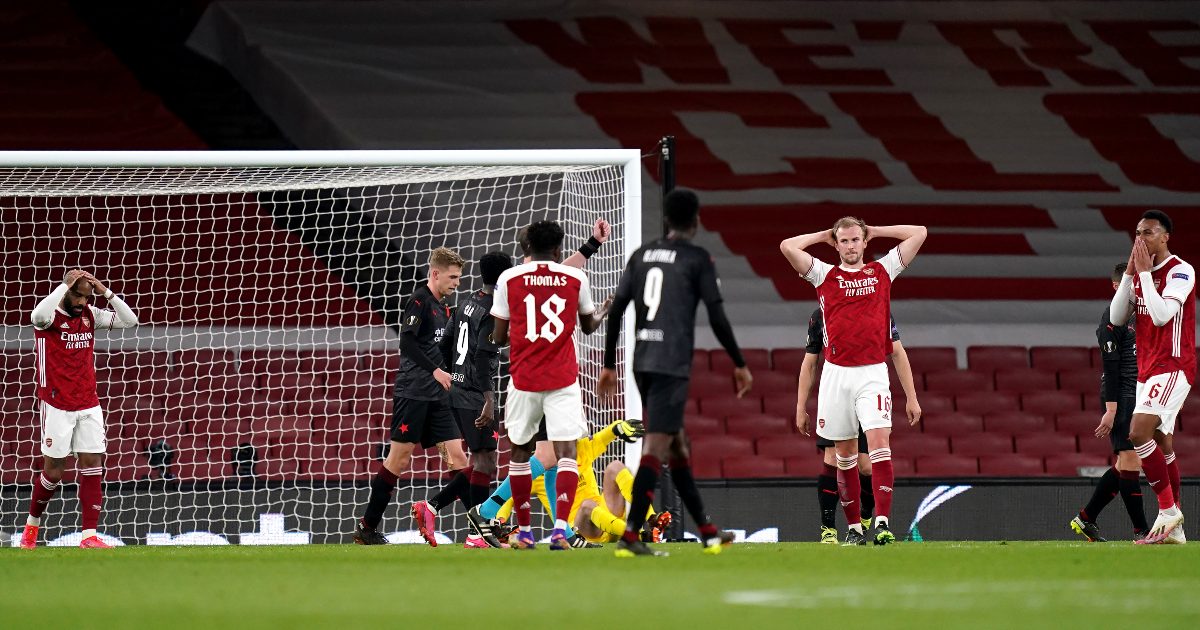 Tomas Holes netted an equaliser for Slavia Prague in stoppage time to frustrate Arsenal at the Emirates.

Nicolas Pepe had come off the bench to seemingly win the game for the Gunners with his strike four minutes from time, but the hosts could not hold on to their advantage as Tomas Holes headed in an equaliser to earn Slavia a 1-1 draw.

The first leg at the Emirates Stadium looked set to end in a goalless stalemate as Arsenal passed up a number of fine chances.

But club-record signing Pepe found the net with a deft chip to open the scoring only for Holes to level late on.

Mikel Arteta opted to drop captain Pierre-Emerick Aubameyang to the bench for the game, which saw both Willian and Alexandre Lacazette hit the woodwork.

Slavia, who have seen off Leicester and Rangers in previous rounds, had a couple of good opportunities of their own and ultimately scored what could prove to be a crucial away goal as Holes arrived at the back post to leave Arteta crestfallen on the touchline.

Bukayo Saka, Emile Smith Rowe and Granit Xhaka all returned to the Gunners side from Saturday’s 3-0 thrashing at the hands of Liverpool – as Aubameyang surprisingly made way.

The skipper later came on to miss a good chance, with Saka and Lacazette also passing up decent opportunities to break the deadlock before Pepe latched on to an Aubameyang pass to score.

Arsenal were soon making chances of their own – Lacazette shot well wide before Saka’s well-timed run saw him collect a slide-rule pass from Rob Holding, but the England winger could only shoot wide when he should have scored.

Saka was enjoying a good start up against opposing full-back Boril, beating him several times and winning a free-kick with a little under 10 minutes left of the half.

The original set-piece came off the wall but the ball was recycled by the hosts, with Cedric Soares crossing for Holding to head towards goal, forcing a fine fingertip save from Ondrej Kolar.

Saka’s storming runs earned another free-kick at the start of the second half, this time right on the edge of the Slavia box.

Willian rattled the post with Kolar rooted to the spot, the chance acting as something of a wake-up call for Slavia, who enjoyed another good spell of possession as Leno saved well from Boril.

But it was Arsenal who again passed up a fine opportunity, Lacazette hitting the frame of the goal having run clean through after nipping the ball away from Oscar Dorley.

Arteta attempted to give his team more of a cutting edge as Gabriel Martinelli, Pepe and Aubameyang were all introduced in quick succession.

But before the changes it was Slavia’s own substitute Petr Sevcik who narrowly shot wide with the game still crying out for a goal.

Aubameyang should have delivered it with his first touch but skewed his strike horribly wide after being picked out by Smith Rowe.

Martinelli did better with his first effort of the night but saw it deflected behind, before fellow substitute Pepe made the difference.

Xhaka played the ball forward to Aubameyang, who turned and played in Pepe, with the Ivory Coast forward bursting into the box and finishing coolly.

Slavia reacted well and levelled in stoppage time as Leno turned a Lukas Provod shot onto the post and behind.

Provod took the resulting corner, which flicked off the unsuspecting Pepe and allowed Holes to stoop and head in at the back post with the last meaningful touch of the night.