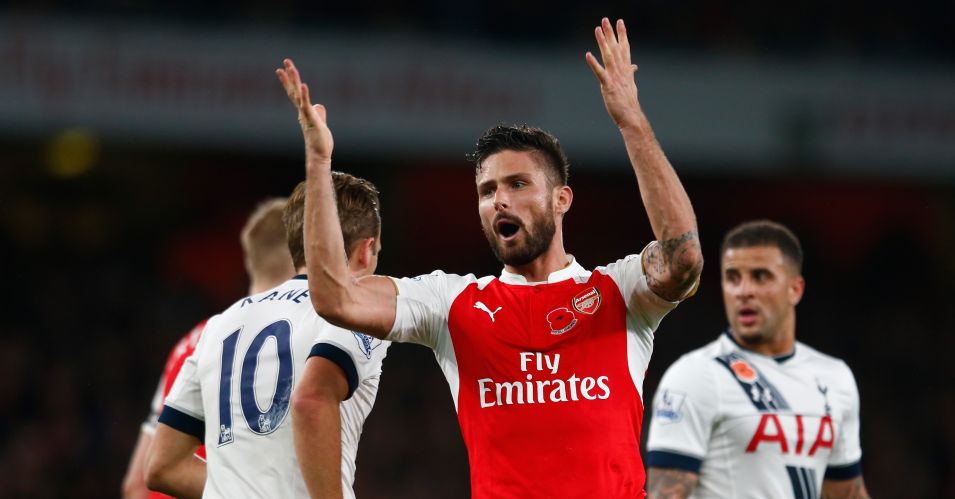 * So is that the 77 minutes that proved Arsenal cannot win the Premier League title? Or was it the final 13 minutes (plus injury-time) that proved they can? This feature is called 16 conclusions rather than 16 questions so I will start as such: This was the 90 minutes that proved nothing that we did not already know; Arsenal have a massively flawed squad that will ultimately cost them the Premier League but a tenacity coupled with individual excellence that means that they will go close.

They will finish the season within five or six points of the champions in spite of – rather than because of – a squad that (stop me if you have heard this one before) is short of a top-quality striker and a physically imposing central midfielder. We say it all the time simply because it is true. And yes, we are as bored and frustrated as any of you.

For all the talk of minute-per-goal ratios, you would rather have a dozen other strikers on the end of Mesut Ozil’s glut of ridiculously good balls. Cometh the hour, goeth the chance against the bar or wide.

He is a beautiful, beautiful man but he is not the striker to build a title challenge around. And neither is Theo Walcott, before anybody makes the argument that Giroud is merely a back-up striker and better than Manchester City’s back-up to Sergio Aguero. Two 7/10 strikers with major flaws in their game do not equal one 10/10 attack, however you do the maths.

* Also, do not attempt to gee up the crowd after 80 minutes when you have let them down time and time again with your ridiculously poor finishing. The crowd was only largely still in the ground because your reserve left-back finished a chance that you would have blazed over the bar.

The centre-half who has made his seventh block of the match, the full-back with a last-ditch sliding tackle…they are allowed to do that ‘come on’ gesture to the crowd. But the striker who has had five attempts and only hit the target once, created no chances, lost the ball eight times (eight bloody times!) with a poor touch and recorded a pass completion rate of below 50%? Not so much.

“I believe it’s arrogance, why he won’t buy players of power to accompany his big players, Arrogance or naivety,” is what Gary Neville said in August.

I call ‘neither’. In the summer I repeatedly called it ‘infuriating/admirable loyalty’ and I have seen nothing to change my mind. Nothing changed my mind in the home tie with Bayern Munich and nothing changed my mind in the 3-0 win over Manchester United, where Louis van Gaal made a bigger cock of his midfield selection than Arsene Wenger had made of his midfield summer stagnation.

Van Gaal inexplicably did not play Morgan Schneiderlin in the match which could have illustrated exactly why Wenger should have upgraded to the Frenchman or similar. Mauricio Pochettino made no such error – playing three physically imposing and energetic central midfielders against Arsene Wenger’s two tiny dancers and genius of a conscientious objector.

Wenger has a love for his players than means he cannot look at Francis Coquelin and Santi Cazorla and think ‘I need somebody bigger’. And even a 77-minute battering at the hands of Tottenham will not change that. Infuriating and admirable in equal measure.

* There is a chippy Twitter user called Sir Santi The Great who has piped up after almost every Arsenal victory this season with a reminder that I said both Schneiderlin and Bastian Schweinsteiger would improve the Gunners’ midfield.

On Sunday afternoon he was tweeting – not to us, obviously – that Tottenham had given a ‘tactical masterclass’ to nullify Arsenal’s midfield, and raging that Cazorla’s non-performance was a consequence of Wenger’s refusal to build a squad.

I repeat this not to say ‘I told you so’ but to illustrate the unhealthy relationship some Arsenal fans now have with Wenger. He sucks them in with flowers, chocolates and impressive calendar years, and then punches them square in the face. It’s not because he loves you. And he will do it again. There are shelters you can call for help.

* I tend to agree with Neville’s oft-repeated point that for all Cazorla’s brilliance on the ball, no team will win the Premier League with that type of footballer in central midfield. For all his vision and wonderfully quick feet, you cannot dominate a midfield against players who are both combative and skilful without either physicality or pace.

He was bullied and broken at the Emirates on Sunday and we should not be the slightest bit surprised; he had missed only 14 minutes of Premier and Champions League action this season. At the age of 30. In the most physically demanding position in football.

* I am not sure I would call it a ‘tactical masterclass’ from Tottenham, but only because that would imply that this was a one-off plan to thwart one particular team. That would do Pochettino and his young charges a disservice. They did what they have been doing all season – run and press and harry and then have the quality to make all that running and pressing and harrying worthwhile.

I will admit to being sceptical about a Tottenham midfield featuring Eric Dier at the beginning of the season, but it is a decision that should only be questioned in isolation. Add the quality of Mousa Dembele and Dele Alli – genuine box-to-box midfielders in an era when everybody wants to talk pivots – and you will dominate most matches.

* Talking of Dembele, it was infuriating to hear the commentator talk about the Belgian’s thrust as a shiny new element to his game. He arrived at Fulham as a striker and was converted into a dynamic midfielder who perhaps should have made a bigger step up the footballing ladder than the one that took him to Tottenham. And during his first season at Spurs, he was phenomenal – the perfect blend of power and finesse. Only the goals were lacking.

He clearly lost his way – like many do when managers frequently change – but let’s not pretend he was never a wonderful footballer. Pochettino deserves credit for his re-emergence, but let’s not forget the ‘re’ in that sentence.

* What kind of black magic is afoot when Erik Lamela makes eight tackles and has to be substituted because his voracious appetite for a combat has left him one mistimed tackle away from a yellow card?

I have written before about Pochettino’s understated style being perfect for a young squad; there is no better example than Lamela, who has been brilliantly motivated without being browbeaten. You can only imagine what he thought of Tim Sherwood’s Little Englander bluster.

* Despite the reluctance to talk ‘tactical masterclass’ when the midfield battle boiled down to having stronger and fitter footballers, I am happy to give Pochettino credit for clearly instructing his players to continually look for the space behind Per Mertesacker and Laurent Koscielny, aware that the BFG can’t f***ing turn, and the Frenchman is prone to rickets in games of import.

It was a feature of the first half and there was no surprise that it was an exquisite long ball from Danny Rose – given way too much space, of course – that left Koscielny ridiculously attempting to play offside while his defensive partner was floundering.

* Daniel Storey wrote in Big Weekend that there would be ‘no better way to remind everyone of your brilliance than with a virtuoso performance in the north London derby’. He said it was the type of game for which Alexis Sanchez was honed.

Unfortunately, the Sanchez capable of a virtuoso performance disappeared after a bright opening 15 minutes in which he took on Kyle Walker and we thought ‘oh aye, this could be interesting’. One ball to find Joel Campbell at the far post was particularly breathtaking. And then…nothing. Nada. Bugger all.

Is he knackered? He has certainly lost some of that streetfighter exuberance that we frotted over last season, and that can certainly be attributed – at least in part – to another summer of football and then a rushed return. Wenger will say that his enthusiasm makes him a difficult player to rest, but that is your job, Arsene. You are supposed to decide when players need a break. Simply saying ‘oh go on, boss, I want to play’ should change nobody’s mind.

* In the Sky Sports studio, questions were asked before the game about Arsenal making only one change after a physically and emotionally draining game in Germany and Thierry Henry made the point that injuries had left Wenger with little option. He had to play a set of players who had been dragged up off their knees, because everybody else was on their backs in the treatment room.

Which is why I am reluctant to put too much blame for Arsenal’s non-performance for the vast majority of the north London derby on the shoulders of the players themselves. None of the outfield starting XI emerged with any real credit but did anybody’s flaws really surprise you, keeping in mind that confidence must have been on the floor after Wednesday?

Losing 5-1 to Bayern Munich was only going to make slow players slower, small players somehow smaller and tactically naive players look even more lost. And there was nobody to take anybody’s place. Feeling knackered? Feeling low? Well tough titty, the only other option is Alex Iwobi.

The phrase ‘Tottenham wanted it more’ is glibly trotted out at times like these, but Tottenham were simply fitter and faster. And largely younger.

Spurs have also played three games in a week but they have travelled nowhere and played (and crucially, beat) Anderlecht; Arsenal have been to Germany and been destroyed by one of the best teams in the world. To pretend there is no difference is ridiculous.

* Seven of Arsenal’s ten chances were created by Mesut Ozil. It’s just a shame he never does it in big games.

* For all the confidence Tottenham should take from outfighting and outplaying Arsenal in general play, their worries will be threefold:

How did they not make the kill when Arsenal were on the floor and bleeding? Do they have the firepower required to become genuine contenders for a top-four place?

How can a defence that looks so solid in general play, then look so vulnerable from set-pieces. Every time Ozil stood over a stationary ball, you felt that Arsenal had a chance their endeavours really did not merit.

For all Pochettino’s efforts to re-brand them as hardy little fighters, do they still retain a vulnerability that means they are always one setback away from collapse? Having looked by far the superior side for 77 minutes, they then fell apart so spectacularly that they were relieved to hear the final whistle and take away a point.

Sometimes, there are more questions than conclusions.

* “Is this one of the best Tottenham sides I have faced? I’ll tell you after the game,” said a clearly worried Wenger. We can answer that for you, Arsene: We have seen more skilful Tottenham sides with brighter talents, but we are not sure we have seen one humble enough to work so hard and with so much potential to improve. Having seen the best and worst of this Tottenham side at the Emirates, we should all be a little bit excited to see what happens next.

* It was enthralling. It was fascinating. It was utterly ridiculous. After the somnolence of last season, we are loving 2015/16.